Hi all - first post here. Using dd-wrt now but thinking about moving to openwrt if it can solve the issues I have with wirelessly connecting two subnets.

Two adjacent apartments, each apartment having an internet gateway on a different subnet (one is 192.168.0.254 and the other is 192.168.1.254). There is now a wireless link with two non-gateway routers linking the two networks together (with old "repeater bridge" technology), and every router / gateway has mask of 255.255.254.0 so they can see one another. The APs of the individual routers have different wireless network names and each router is configured to point to either of the two gateways depending on physical location, so devices connecting to an AP within a particular apartment will access the DHCP of the appropriate gateway within the same apartment and subsequently have WAN access via the appropriate gateway (I.e. no need to hop through the repeater bridge).

All is good except I have to disable the relaying of broadcast messages at the "repeater bridge" otherwise pings to the other subnet will be duplicated (apparently the "relayd" daemon used by ddwrt is a bit buggy). So no access to DLNA servers at other subnet. Also the whole network is not really stable - I have to add a job to auto reboot the routers when it loses connection for whatever reason.

So several question I have for the Openwrt pundits here:

Just to close this thread, after many days of struggling with the setup, mission accomplished. This is my new network topology: 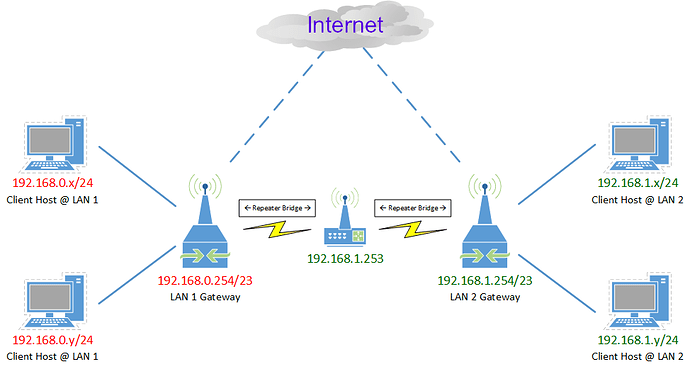 But I ended up using DD-WRT for 192.168.1.253 to connect the two sides wirelessly. And only one of the two gateways are running Openwrt (mainly because the other one is not capable of flashing to Openwrt).

You probably can but I would not do it. Because the driver support for Broadcom Wifi devices on OpenWrt is poor. Broadcom's Open Source drivers are pretty bad. I don't know what drivers DD-Wrt is using exactly. But they have an agreement/contract with Broadcom and access to the "real" drivers. This means much better Wifi.

Edit: It migh depend on the specific device also. A lot of ppl. here using wrt1200, wrt1900, wrt3200. But you should research for your specific units carefully about wifi performance.

Can I then setup mesh 802.11s in one of the two networks? But within this mesh network I have routers of different brands and architectures (broadcom and atheros). But they are all capable of running the latest version of openwrt.

That is what mesh is about. You can do so if the driver supports mesh on your router. You can check this with:

I'm not a mesh expert. But with VLAN's this should be possible to do.

If you can insert routes on both main routers you don't need relayd, etc. Run it as two standard /24 networks with a link between them. The linking router holds an IP on both networks (on separate interfaces) and forwards between them. The main router on each network has a route to the other network through the linking router. An extra tweak that would increase performance would be to have the DHCP servers push this route directly to the endpoints so they don't have to forward through the main router.

The linking router will probably be wired to one of the networks and wireless on the other. Since it is holding only one IP address and does not need to bridge any layer 2 packets it can use a regular AP-STA link.

A firewall can be set up within the linking router to restrict use of the link in almost any way you want.

Another, more conventional way to do this is a VPN. The advantage is the two apartments can be anywhere, not necessarily in radio range of each other. The disadvantage is LAN to LAN becomes limited by the speed and latency of the ISP and encryption hardware.

Thanks for your suggestions !

Although I have got everything working the way I wanted, one thing I still don't understand is how a 'linking router' can establish route to/from a different subnet (and this is why I purposely set my gateways and my 192.168.1.253 (a.k.a. the bridging wireless router) to have subnet masks of /23 so they can see one another. It works, but I am still curious...)

The printer's response to 192.168.0.70 again goes by default route through that apartment's main router 192.168.1.1 then over to the linking router and is sent to the PC via the wlan0 interface.

It is important that none of this setup affects the Internet use or DHCP address assignment in either apartment. It is only when someone originates a packet addressed to the other LAN that the linking router gets involved. Which is something that needs to be done deliberately by IP address, although it is possible to set up DNS to resolve local IPs on both sides.

As you can see the extra credit here is to configure the routing tables in the PC and the printer to use the linking router directly instead of going through the default route to their main router.