Long-time lurker due to wanting to flash my Luma "mesh" wifi routers to OpenWRT, I encountered an issue that prevents me from being able to complete the official tutorial, so I am stuck with my Luma hubs as-is for my home WiFi (this is relevant below) and merging those with my OpenWRT router.

Up until now, I have used the LUMAs as the primary network router as I could somewhat manage the network to my liking using their Wifi capability and the fact each Luma node allows me to put a wired "backhaul" to it if I could fish Cat5e successfully, and also can extend the wired connection from any node to another device if necessary (this is nice because it prevents me from needing a hub/switch at each of those locations). So basically, the primary Luma hub was my front-line router WAN/LAN and it would wireless mesh the other nodes from around the house, but those nodes were also backhauled. I would wire them together using various switches to all my devices, and use Luma's app to manage the Wifi network. The Luma also allows me to have a "Guest" wireless network, which I intended to put all my IOT devices on.

However, now I just put OpenWRT on my old Linksys EA4500 (Viper) (yay!) and disabled WiFi on it so it is the frontline router and I want to increase security and network separation, and I need to use my Luma wifi-hub/nodes as they are for my wireless devices (ie. without being able to manage them with OpenWRT). Here is where the problems come in and my confusion.

Some searching yielded discussion about DHCP authoritativeness, but I can't control Luma's dhcp behavior on this....

Here is a picture of my network: 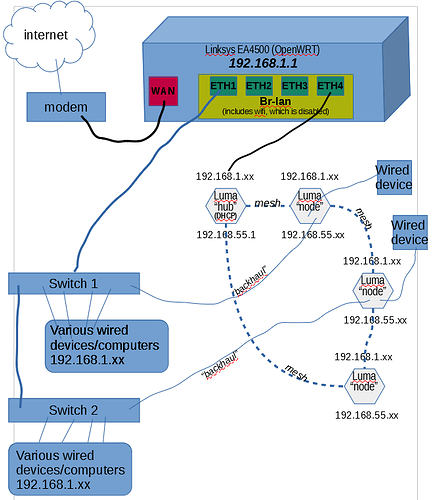 I would like to accomplish the following, if possible:

Once I have that worked out, I can feel comfortable adding other functionality to the network like Pihole, a VPN, port-forwarding, etc.

I fully get my setup is non-conventional, but its what I have and limited within my house. :-/ What I am not doing correctly, or properly, because I am having a lot of difficulty wrapping my head around this. I know I need to separate into VLANs, possibly tagged? I also think that the Luma hub and the OpenWRT DHCP servers are currently competing, hence the weird IP behavior.

I tried cleaning it up within OpenWRT myself and essentially brought everything down (including the working-from-home wife). Help stepping me through this?

In home situations there must be only one DHCP server. Running multiple DHCP servers in a network is very complicated. They have to be compatible (usually exactly the same program) to coordinate with each other.

Does the file actually go out on TFTP? If you're seeing TFTP requests made but no replies, this is because the PC firewall is blocking TFTP. Wireshark looks at the interface before the firewall.

Thanks Mike, so even if the DHCPs are on different subnets, this issue still remains? I had figured "walling" off the wireless from the wired would resolve that and let each manage themselves separately. I appreciate the insight.

As for TFTP, I had dropped my PC's firewall entirely (windows 11) when trying to resolve that particular issue, but your comment means I am going to try it again. I surely might have done it improperly. I also want to try using Linux to connect to the Luma via TFTP in case there is something else (driver-related?) going on.

It has to be separate layer 2 networks, enforced with separate physical paths and/or VLANs. DHCP requests are layer 2 broadcasts. Configured IP addresses are not considered at that stage.

If you have two PCs, run a TFTP client on one to confirm you can TFTP from your other PC. Linux of course has a TFTP client by default, Windows also includes a CLI tftp but it is a Windows Feature which may need to be enabled in the Add/remove Programs control panel first.

Okay, gave TFTP a try again. Still nothing even with firewall down. Tried setting various network settings (gateway, ip, etc) to see if that would change anything. So I still need to setup 2 PCs to test, and also try to test from Linux to Luma to narrow this down more.

Interestingly, I was able to gain root access to one of my Lumas. I may be able to disable DHCP via UCI on the main Luma "hub" (I believe 1 gets designated as a hub and controls all the others). Lumas run a customized version of OpenWRT, so with commandline access I actually can modify this. I just need guidance.

Here is the output of a "node"'s uci show:

I'm wondering if I set dhcp.lan.ignore = '1' that it would buy me some time to figure out the ideal home setup and resolve the competing DHCP servers currently affecting everything.

Do you know if this is all I need to disable the DHCP server?

It's probably going to undo that change with some auto config script. The original firmware is thoroughly obsolete in any case.

That was my thought also. I updated that setting and the wireless network did not come back online, so its definitely keeping at least that setting. There must be some other config I can play with to turn off the dhcp server. Although I expect I would then need to update the firewall to match the new IPs it would be getting.

The "hub" uci show is a lot more complete. If anything sticks out to you as where I should focus my time please let me know. I am not familiar enough with uci yet.

Made some significant progress. Got the Lumas flashed and running OpenWRT 21 (after spending way to long figuring out TFP issues). I am now trying to re-deploy my home network in small steps as I work through and understand all the aspects involved that I am not very experienced with, namely VLANs. Things are looking up and I think I am making good progress, but I am encountering an issue I can't figure out. I don't want to proceed to the next progressive step in building things out unless I understand what is going on here and where I am messing up.

The first step I took was keeping my legacy (unmanaged switches) home network functioning over tagged ports (1 and 4 with PVIDs set) through my main LAN which I created the primary vLAN (br-lan.10). This worked well as my understanding (95% sure) is that I am sending tagged packets out (which doesn't matter bc they are discarded by the legacy switches) and I am tagging everything coming in via the PVID 10. Basically, my router thinks everything inbound on 1&4 are coming in tagged on vLAN 10 and it routes accordingly (...right?). As a result of that going well, I enabled several wireless networks attached to their own vLANs on my main router following along with OneMarcFifty's explanatory videos.

My second step was to start testing building out new infrastructure that I can migrate my home devices to progressively. To begin doing this and learning more, I added an AP (one of the Lumas running OpenWRT 21) to my router's #3 port as part of vLAN 10.But as soon as I change the ports on the Router and the AP from Untagged to Tagged, I no longer can connect to the new AP's LuCI interface.

My understanding is that my router's vLAN I am currently connected to and using (br-lan.10) should have no problem adding the AP to the same vLAN over Tagged ports. This is an OpenWRT device to an OpenWRT device with nothing in between.

What am I missing about this concept that seemed simple until I tried to implement it?