I recently ordered an AR9331 based device from skylab. The description claims that the module supports openwrt.

I do not have a eval board for this, and powering up the module - it creates an access point to which I can connect and login to the administration page. Here is a screenshot. 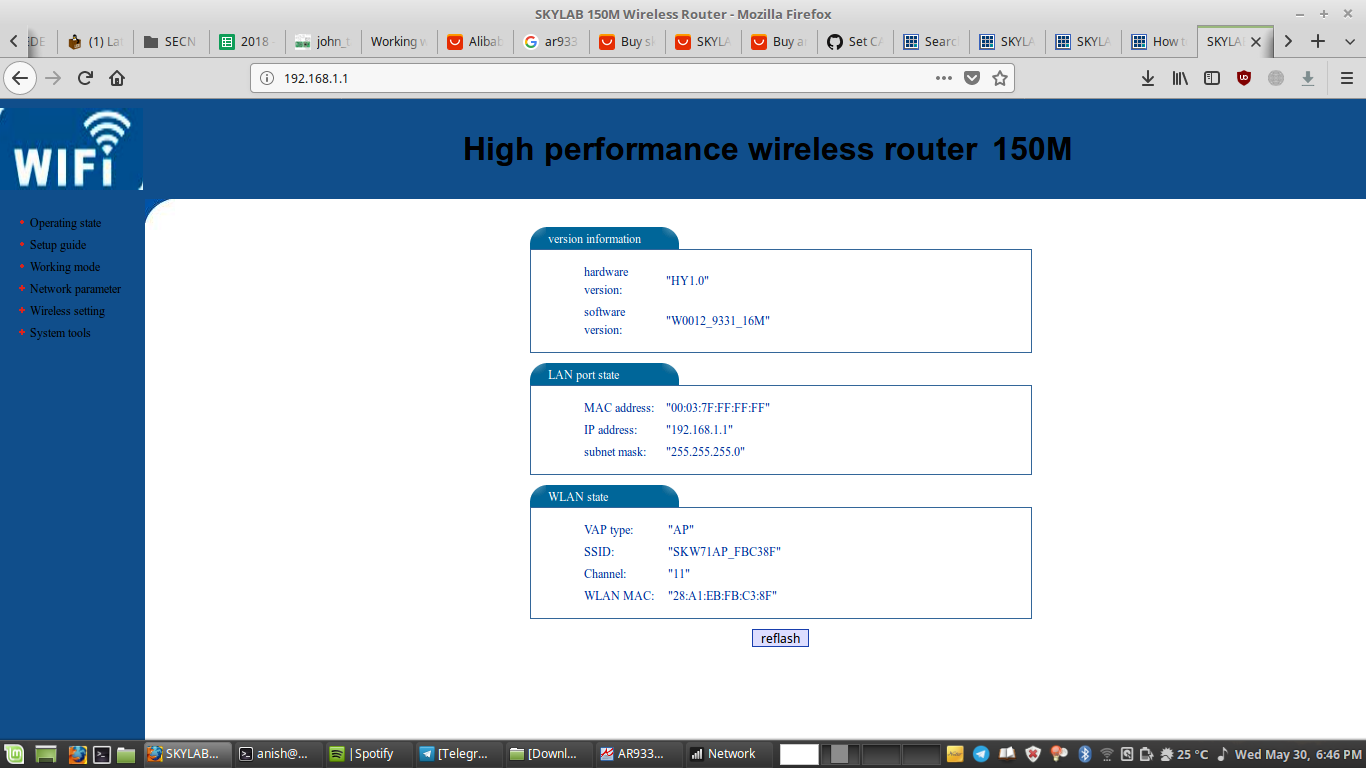 When I asked the manufacturer for an openwrt firmware I was pointed to download the image for TP-Link 710N. Specifically, this was the image that was shared with me.

Here are some open questions:

This is a competitively priced module ($9-10) with AR9331, 16MB ROM, 64MB RAM, but barely little or nothing is available on the openwrt forums on this. I think if it can be made to work with the latest releases, then it might be a useful addition to the supported devices list.

Thanks for the links and the information. Some thoughts:

Builds of OpenWrt for TP-Link devices generally detect the flash size at first boot and build the jffs to use all the space. It is not necessary to recompile at all.

Okay, so I am able to connect via serial from my laptop, and see these messages as below, when the router boots

The output of printenv is:

If I do not interrupt boot, I get the following messages followed by gibberish...

So, does this mean the router might already be running some kind of openwrt? I know it means it is atleast running uboot

I've tried uploading a firmware through the firmware update method on the router's web-ui, but it doesn't accept the firmware.

I cannot really do tftp over uboot as I don't have a working ethernet port on the router (just physical pins), so am a little stuck as to what to do now

The partitioning scheme is not the standard TP-Link. Do not try to flash WR703 firmware to that unit, it will not work.

Hmm, the board shows in the uboot messages that it is based on the AP121 design, so I guess I should use some compatible image (like domino core perhaps).

Another problem is that I don't have a RJ45 ethernet port on this module - so I am kind of stuck. Any thoughts on how can I transfer a firmware image on the board?

Any thoughts on how can I transfer a firmware image on the board?

Which commands are included in u-boot? Use the command "help"...
If you have loadx, loady or loadb you could upload a image over serial to ram and flash it or run it directly from ram for testing...

On ubuntu/debian you need the package "lrzsz" and with "sx" you can transfer it over serial to your device...

I only have used loadx for now, but loady should also work... but i beleve you will need for this "ckermit"

For the first test you should only use a initram image, check your detected partition layout and backup with this your mtd... Then if you are sure it will match your device, you could do a sysupgrade from withing the initram image and reboot to your flashed image...