Hello, my current Network is an OpenWrt router acting as a SoftEther server + Asterisk aside for phone calls ( no transcoding )

what happens is during the first 3-4 minutes of a call, everything is amazing. CPU usage is ~ 0.00. THEN it starts spiking, goes down then spikes again till it reaches 2+ usage. i need to track what causes that usage. top doesn't show anything useful for me because the cpu usage per process is almost consistent YET it jumps.

that's during the beginning of a call : 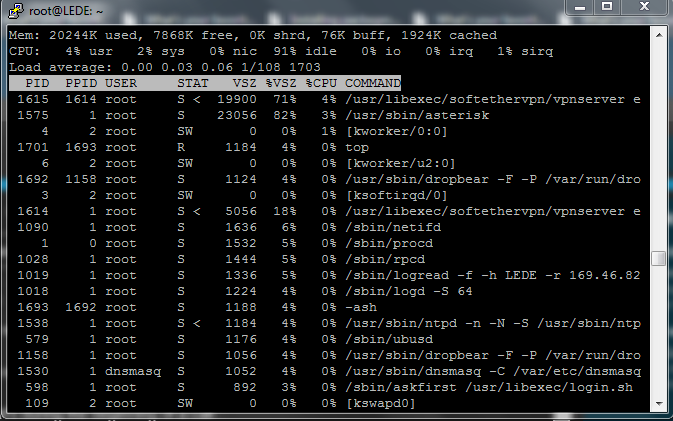 that's when it started spiking : 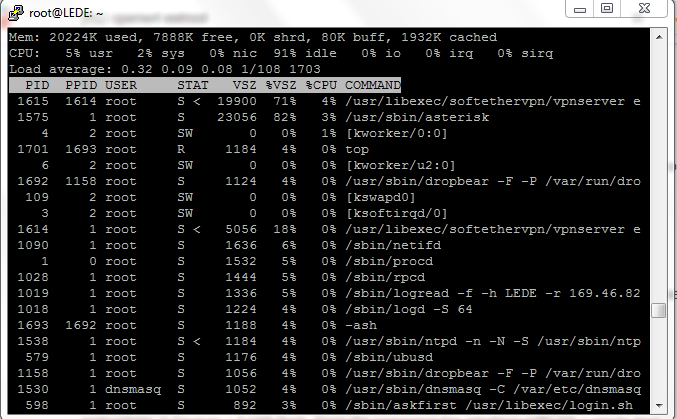 is there any "tool" or command that i can use to pinpoint where the problem is ? any ideas ? thank you so much in advance !

EDIT : it spiked literally the next "top" refresh : 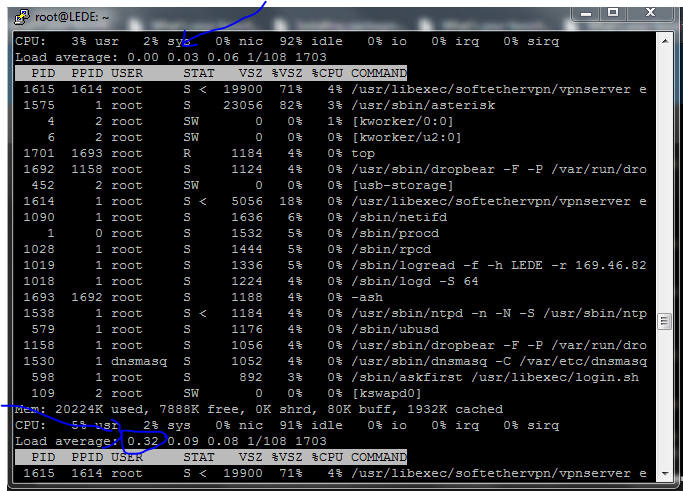 I see 20MB memory, which router is this?
ubus call system board

gonna give it a try. Thanks !

but i just wanna know what causes the sudden spike, is it a problem with USB ? or just kernel module that i don't need/use ?

TP-Link TL-MR3220 This device is NOT RECOMMENDED for future use with OpenWrt due to low flash/ram. DO NOT BUY DEVICES WITH 4MB FLASH / 32MB RAM if you intend to flash an up-to-date and secure OpenWrt version (18.06 or later) onto it! See 4/32...

The last available OpenWRT version for that device is 17.01.5, which is no longer supported.

With only a 400 Mhz CPU, it's not surprising it's struggling.

Time for a new router.

The most likely cause would actually be running out of RAM, followed by swapping over USB (at write speeds of around 5 MByte/s) - and from there on it's game over.

so i have nothing to do about it for the time being. i'm just trying to figure out if i can do anything about the spike to at least not make it go 1.00+ usage when on calls.

As @slh mentioned, memory may be the bigger issue...

but shouldn't it reflect on the %io ? since it's using usb ? or at least kswapd would have the highest usage ?

( i'm not questioning you, just trying to learn how to narrow things down, how to track usage and what corresponds to them )

wow... usage is 0.10 and maxes out at 0.15.. i left a call on for 5 minutes and nothing till now.. is that like quantum physics in terms of when you look at it, it disappears or something ? 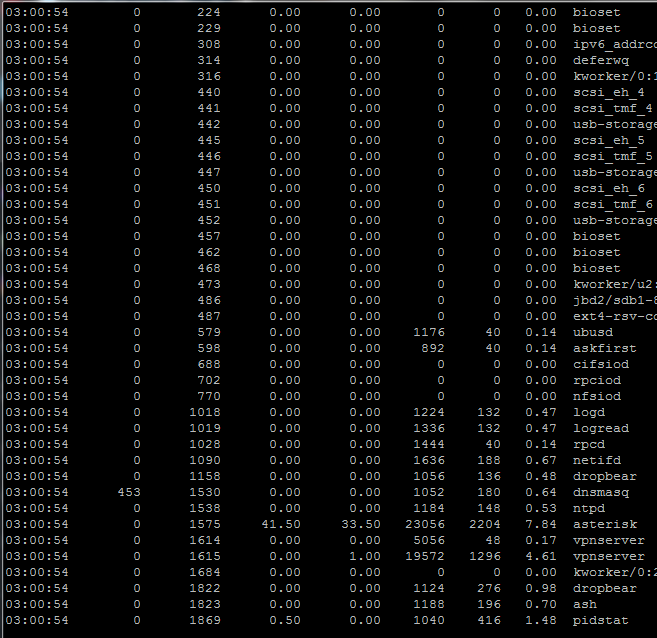 At the time of the snapshot, asterisk and vpnserver (2 PID's) were using a total of 12.62% of memory.

okay, is that alot in my situation ? because the router doesn't do any actual routing for the network. i'm using it as a softether + asterisk only, no NAT nor masquerading. even uhttpd is disabled so...

Devices with ≤4MB Flash and/or ≤32MB RAM (so-called “4/32 devices”) may be made to work but they will be very limited (usually you won't be able to install or run additional packages) because they have low RAM and Flash space. Consider this when choosing a device to buy, or when deciding to flash OpenWrt on your device because it is listed as supported.

You're bumping up against the law of "firmware physics".

well, i wanted it to at least get it stable enough... because if it's not gonna work then i will have to "throw it away" and to be honest i didn't want to because it works and it's not awful, it just needs tweaking since it has Extroot and SWAP ( i know they aren't the lifesavers but at least hopefully it does the job )

Tweaking is not going to change the 4/32 limitation (which is just to run a basic OpenWRT install/config).

i know, i Resoldered a 16MB ROM and added swap so at least i can bypass it ( + Extroot )

You have not one but two big applications trying to run in 32M RAM. USB swap is a very poor substitute. If you control both ends of the VPN, could you change from softether to wireguard?

at first i had OpenVPN but it's also blocked so i disabled it altogether. then i tried L2TP ( also blocked ) and not even port blocking, it's literally protocol block over any port ( even 53 ). That's when i tried softether. this and SSTP they are the only working protocols

i think wireguard is also blocked, i haven't tried it but if i can find a portable server for windows to give it a try before deploying it on the router would be awesome