It’s the crypto that drives the load. WireGuard uses one of the lowest computational cost ciphers generally available.

If you stick with MIPS, you’ll need a 775 MHz clock, based on the testing of GL.iNet, who I believe is honest about their results. Realize that if you run anything other essential router services (LuCI is not "essential") or other CPU tasks (such as handling an LTE modem), you won't get the "unloaded" performance on a single-core SoC.

The TP-Link MR200 just isn't powerful enough for more than basic routing. Moving to a multi-core, ARM-based device, or using "something else" for your VPN would be reasonable approaches. Perhaps a single-board computer, like a current Raspberry Pi (crypto speed unknown by me), might be a cost- and power-effective approach.

Thank you for the information.

I need some more hardware to take the vpn and wireless part of it, and leave the tp router to only handling LTE, agree.

What option do I have for hardware for hoisting vpn and wireless, same unit?

Where are you located? Unit availability and pricing are very different by regional market.

What is your budget? Do you have power or size constraints?

Norway, but location shall not be aproblem, just purchase and get it shipped.

I will try to get everything inside low voltage cabinet I have.

Can be a good choice?

Right now I only have LTE, but LTE+ coming soon.

I’t just on my cabin so not top secret traffic

So I’ planing to use VPN to home and direct out on internet for rest of the traffic.

Budget lowest as posible, but try to get almost out of the internet speed...

Do you have access to a WireGuard VGPN endpoint, or are able to configure one on a VPS yourself (~US$5/mo)?

Based on GL.iNet numbers, so at least self-consistent

As you can see, the load of OpenVPN at even moderate rates exceeds what a MIPS-based router can handle.

Based on that, I'd recommend an ipq40xx-based unit, or one of the faster SoC families, such as ipq80xx, mvebu, or x86_64/AMD64. I don't have experience with the mvebu wireless, but I find the wireless performance of the ipq4019-based EA8300 to be noticeably better than that of the ath79-based Archer C7v2 units I've replaced. Recently someone here posted that Amazon UK had EA6350 dirt cheap (£34).

Ignore the title, but this post has some good starting points:

Can that be something? Should handle 100mbit openvpn?

Can have site to site with pfsense and openvpn then.

I, personally, wouldn't buy a cheap, import, such as the "New Qotom-Q150P Fanless X86 Desktop computer Intel Baswell Processor N3150 qual-core 1.6 GHz,Up to 2.08 GHz" you linked, especially from a seller that you have no meaningful recourse from. You can read further opinions on the pfSense boards.

You can buy a SBC like the ODROID H2 for a comparable price, with a J4105, with what I consider good support and, at least based on the other ODRIOD products I've owned, good layout and fabrication.

The ODROID-H2 hardware was interesting!

So these hardware shall be able to give me 100mbit ++ on OpenVPN?

Hardware to these mainboard:

Memory:
how much do I need ?

Something more I need?

Thank you all for your inputs!

I have a question when it comes to Openwrt.

I will use the TP MR200 to get access to the 4G network and then send all traffic further to the pfsense box.

What settings should I have on the TP MR200 running OpenWRT to make these happens in a good way? I understand the default OS on the TP MR200 is not supporting bridge mode, but OpenWRT can?

Its semi brigde mode I need?

It sounds like you considering the H2 for running pfSense, with OpenWrt handling the modem.

I don't run pfSense myself, but extensively run FreeBSD, on which pfSense is built. I've got an H2 arriving today so will be able to comment more on the case in a day or two. I went with the Type 3 case as I'll be mounting two SSDs in it.

My application is probably a lot more demanding than yours as I will be building packages on the box, something that just takes too long on my APU3C4 units. Still, for FreeBSD, I'd recommend that you use ZFS on a two-way mirror (or better). An absolute minimum of 4 GB of RAM, with 8 GB comfortable (2x 4 GB sticks) for day-to-day operation. I've been running on ZFS for years now, and its advantages for stability and maintainability (such as "instant" live snapshots) are significant. 250 GB SSDs seems to be the smallest you can buy from a major manufacturer (I use Corsair and Samsung units), running $40-50 each. https://ssd.userbenchmark.com/ has some interesting numbers for guidance. The Kingston units seem reasonable, especially at the US$20 price point. With low-end drives, mirroring provides a bit more confidence.

Thank you, it’s not any problem using OpenWRT as a modem?

Are you planning to run OpenWRT on the ODROID-H2, what benefits are that giving you?

It has been reported issue with NIC:

I`m planning to upgrade my old Pfsense box to ODROID-H2 hardware. The main purpose is to host a OpenVPN server, what speed can I expect to get from these hardware when it comes to OpenVPN performance? How much memory and disk space do I need for...

OpenWrt can handle many modems quite well. I don't know if it can be configured to have your downstream box deal with the DHCP, but there is the range of options between selective ports to forward (if any) and full, one-to-one "DMZ" to your downstream box. I do something similar where my modem-connected box handles the DHCP, NATs to the fixed address of my next router, provides nftables firewalling, and forwards everything to my inner firewall. This lets the inner firewall use fixed rules, as its interfaces never change address.

I select an OS based on what the application is and how well it fits that application and hardware. The specific application that drove my H2 purchase is a FreeBSD-based server that runs my primary services in jails. The APU3C4 was great for day-to-day use. Some of the packages need non-default settings, so I need to build them myself. The APU3C4 takes tens of hours and, based on my experience with J1900 and 1037U, I would expect this to drop to a reasonable period of time. This means one less box consuming power, even if only 10-15 W.

Yes, Realtek NICs aren't as robust as Intel, Chelsio, Mellanox, or the like. Then again, those cards, if genuine and not "clones", cost more than the H2.

I have now purchased the H2, case, memory, SSD

I will use the TP router as a modem by using bridge/DMZ and then the new hardware as a router/VPN Server with pfsense software.

I will then end up with Site to Site OpenVPN (pfsense in both ends) hope I will be happy with the performance.

Got mine somewhat put together last night -- one hitch

Only NVMe drives work in the M.2 slot

The Kingston A400, with its SATA interface, will not work.

so the old Corsair I had sitting around didn't work. Yes, it's clearly documented, but I failed to check the drive before assembling everything.

Most of the pieces of the Type 3 case are not symmetric, and I somehow managed to get at least two of them assembled "upside down". There are YouTube videos for the assembly of the case, as well as the power switch. The one trick on the power switch video was how to coil the wiring neatly. Here's the pin connections 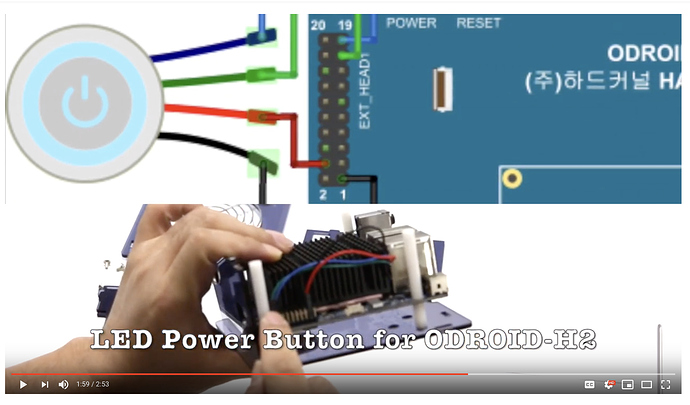 Have you been able to test more, performance?

The package is shipped now, looking forward to open up the package

Currently testing with Debian to get a handle on things and what drivers are needed.

Installed r8168-dkms and firmware-realtek. The NICs run without either, no matter what the dire warning suggests.

iperf3 at 940 Mbps, which is basically the throughput limit of GIgE, from what I understand. Routing and/or VPN not yet tested.

lm-sensors detects and reads (here at idle, without fan)

A fan is definitely needed if you're going to push it hard.

I stopped when the CPU temp crossed 75°C

I'm using a Noctua NF-A9. Running tests on 12 V to start, as I don't have an adapter from the non-standard fan connector yet. I'll try at lower voltages as well. I haven't checked for an EMC2103 driver yet in the OpenWrt tree/packages, though there is one in upstream Linux. BIOS is another option, though I like to run as quiet as I can.

firmware-realtek is needed for a small subset of chipset revisions supported by r8169, in most cases even those that do use the provided firmware don't hard-depend on its presence (the firmware package is hot-patching sub-optimal on-device firmware, often related to interoperability in corner cases, such as long lines or combinations with other quirky devices).

The out-of-tree r8168-dkms package should never be necessary, r8169 is supposed to cover all recent RealTek cards - you basically just replace one set of bugs with another, at the price of having to deal with a …vendor driver.

No FreeBSD yet? You also probably want to use powerdxx from ports btw

When you different voltage, these is overclocking in the bios? I’m not so technical so was following of what you writing

Or should I install a fan on top of the cabinet blowing down on the colling ribs to the CPU?

I only have 80mbit/80mbit line so I guess I will run on low number of CPU load in Pfsense?