To build a bridge for the network interfaces

Comrades, I would like to clarify a few points about configuring bridges in OpenWrt.
This means that there is a Wi-Fi adapter that works in mesh point mode and communicates with another Wi-Fi adapter in the same mode. On the first device:

On the second device: 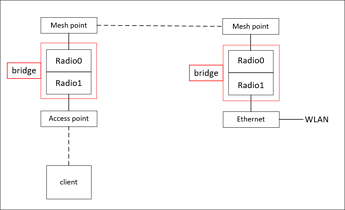 So long as they're bridged with a VLAN.

When you're getting started with meshes the simplest way is on each unit add the mesh radio interface to OpenWrt's existing lan bridge. Configure the routers like dumb APs that would be linked with cables, only now they are linked via the mesh instead.

It's a good idea to turn STP on on those LAN bridges so that if you do connect by cable at some point (you would likely want to for setup and troubleshooting) there isn't a problem with a network loop.

Later you can create a separate bridge. That is good if you're going to have untrusted users on the AP thus you won't want them accessing the LAN.