I live in an area that lacks of power andd I am using 12 V batteries to power up my devices in my home with a solar charger..... the rest does not matter. Anyway I really care about each watt consumption and I have an ADSL Router/AP with wifi into it so 3 in 1. Anyway the device is ASUS DSL-N14U which has 12V 1A adapter included with it. As I have DC system I am not using that adapter but instead of that I hooked it up to my batteries directly with a short wire. The voltage of the batteries can go as low as 11 volts and can reach up to 15 volts but idk about the current and I think it should not matter as the device should take the current it needs to work.
Sometimes I use an inverter with a square waves to power it's adapter, but I heard somewhere that non pure sinewave can make issues with some devices and high input voltages can hurt the internal components so the device won't run again on it's rated voltage and will need higher voltages to work properly again or some problems with wifi network and some errors with modem processing will occur. I am not sure about any of these things because my thougts was that the device itself will manage and ditribute the voltages on different components so the processor take it's desired amount of current and voltages through a VRM like a PC so in my view it should not be a problem. I just wanna know if everything will be fine if I powered it up with batteries or square wave inverter. It looks fine, but sometimes I blame it if something went wrong in my network for no specific reason so each time I experience any issue with my ISP they blame my device as it is not powered by it's own adapter on a sinewave AC city wall socket, but I am not sure about what they say. However the problem comes and go away. I can't troubleshoot it because I have multiple issues. Everything is weird honestly from my ISP to my home and I am fixing everything 1 by 1 so I will start by my home, my components then local box then my ISP. I decided to leave the ISP to the end so I can make sure that they don't provide well proper service before I change it

High but unstable SNR with low attenuation and some sudden CRC detection
slh January 24, 2020, 1:36am #2

There is no generic answer to this question, or rather, the generic answer would be the one you wouldn't like to hear (as in this not being safe). To answer this, you'd have to look at the device in question (open case) and reverse engineer its internal power distribution circuit, to figure out the tolerances it is built to withstand - some are built to take a variable input, some are very, very sensitive to unexpected power events.

The problem with inverters is not so much their 'unclean' sine, but rather that they mix up and approximate the sine by using frequencies in the multiple 100 Hz ranges - and these make filtering as part of the rectifying harder.

If you want to feel safe, without reverse engineering the existing PDC, get a good -stabilized- DC-DC converter matching your router's needs.

I already own a step down voltage regulator so if I made sure the power is always 12V+ should it work fine with me? I can buy another one which can regulate the voltage stepup/stepdown and has also a current control. Do I need the current control or I should be fine with just voltage control. Lastly I have 12V monitor and I am using a stepdown voltage to make sure it's input is 12V on load, but for some reason when I hook up a 5V device on lines at the same batteries regulated with another stepdown regulator, my monitor start waving for unkown reason so I can only run the monitor alone or that device alone, but once they share the same battery even with stepdown regulators the monitor starts to wave, I tried another monitor and experienced the same so what causes this thing. I have to say that 5V device is a stick PC that gives video signal through hdmi to vga to the same monitor

I've never had a problem connecting 12 volt routers to a 12 volt nominal battery system. All the chips in the router run on 3.3 volts or less so there is a good internal step-down regulator as the first thing after the power inlet. Find the regulator chip and look up its maximum input voltage it is almost always 18 volts or more.

My first step in diagnosing dodgy DSL is to unplug the modem, connect an old line-powered analog phone to the line and listen. (Assuming the company is supplying the loop voltage), you should hear either clean nothing or a dial tone. If you hear hum, crashing noise, etc. there's a fundamental problem with the line that's likely to also affect DSL. 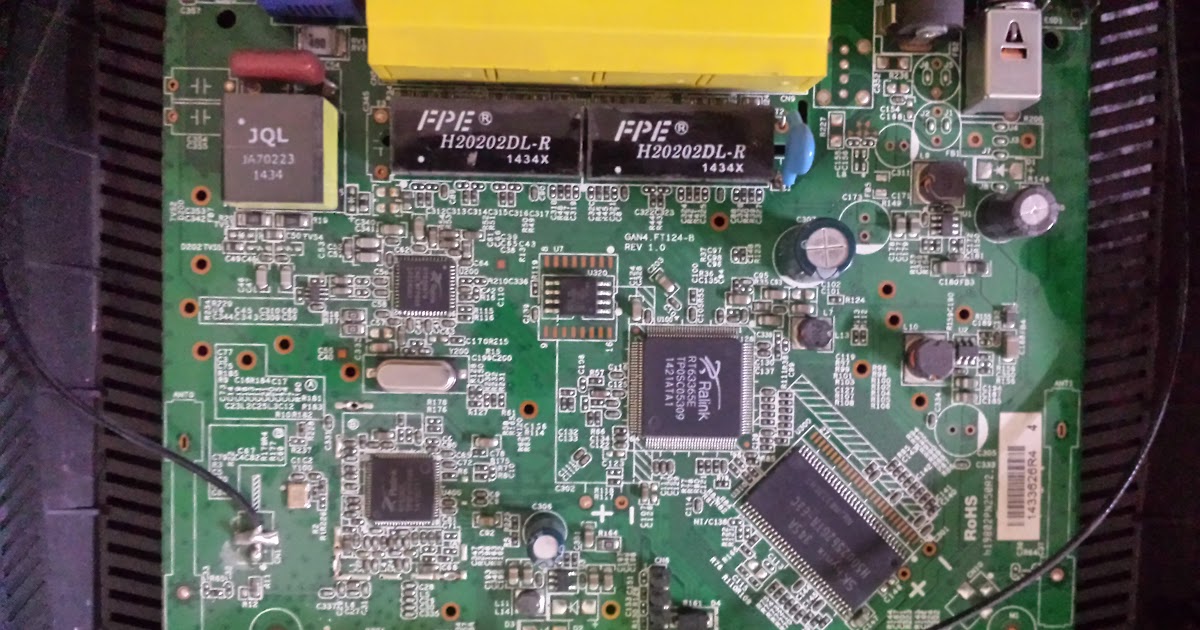 I can't find what you are refering to so here is it.
I can say it works whatever the input voltage is (down to 6 voltage) as long as there is enough current and when there is not enough current it runs in a constant rebooting process

U1 and U2 are the voltage regulators. It might be hard to find info on them since they are small chips with incomplete numbers. The capacitor to the right of U1 looks like it might be leaking at the top.

You don't need to regulate current, only voltage. Current limiting is for protection against short circuits or overloads, not part of normal operation. Always have current protection in place, usually with fuses.

Connecting multiple devices to the same battery (e.g. computer and monitor) risks having a "ground loop" through the signal cables. This is less likely with Ethernet though because Ethernet has transformers on the signal lines which isolate DC.