the original thread for the MiWiFi 3C (Support for Xiaomi MiWiFi 3C) was closed because some users had misused this forum for discussing other firmwares than OpenWRT.

There is an easy way to gain SSH access to the router without opening the case.

By this it is possible to install BREED for flashing firmware.

The system architecture of the Mi-Nano is quite similar to the Mi-3C.

So I have taken the firmware of the Mi-Nano and flashed it via BREED.

Everything works correctly with the 19.07.5 firmware ... except that the WAN and the LAN1 ports are interchanged.

So it should be a small thing to do the required adaptions for having an official OpenWRT release version for this router.

Is there anyone who wants to support?

I have already re-engineered the correct port assignments and need someone who has the authority to put those into the configuration file.

I have updated the Wiki on how to gain SSH access, how to flash BREED and how to install the firmware: BTW: I have written this post on my PC connected to my Xiaomi Mi 3C on which OpenWRT is installed

Dear @eduardo010174,
thank you very much for testing and confirming that the functionality is the same as with the stock rom, which is also based on OpenWRT.
I hope that we will get an official release for the Mi-3C with a little bit of help of the experienced developers you have notified.

With this version of breed run better. I'm have problems with before version on maping system.

I don't have time for regirous test capacity of wifi.
But an opinion run equal of stock.

I wait for more users test.

change breed not help on wifi.
but i need feedback.
e don't have problems on wifi now and you?

i not test 3c in wifi repeter.
but my r3G not run great as repeter, i dont wait great of 3c

By the way with regards to BREED I do not recommend to use the one for the MT7628:
https://breed.hackpascal.net/breed-mt7628-hiwifi-hc5661a.bin

The reason behind is that the MT7688 bootloader offers also a working reset function.
I have made the experience, and also others who have tested other firmwares like Padavan, that a reset is needed before flashing a new firmware.
Otherwise the newly flashed firmware can be buggy.

For help others users. It's possible write complete tutorial in forum?

In the first post of this thread you can find the link to the forum.
I had already updated it.
Please have a look. And in case something is missing I am willing to include it.

In the first post of this thread you can find the link to the forum.

To the wiki, not the forum.

Dear @tmomas,
thanks for correcting my words.

I had used the wrong wording, but put the information to the right place

It is much more effective to have the information on how to flash the router in the Wiki, because this is the place where people first look up things.

Is anyone able and willing to create a build for the Xiaomi Mi-3C based on the code of the Mi-Nano?

In one of the previous posts you can see how to configure the ports correctly.

The required modifications are little.

I am willing to support in developing and testing.

Hi there, thank you for opening this thread, can you plz say how is the router running on openwrt 19? Is the port issue solved? I would like to try your build. Also can you post method to revert back to stock using breed? Thank you once again in advance.

Dear @anjmis04
the Mi-3C router works correctly in all operation modes with the latest 19.07.5 build for the Mi-Nano router.
The only "bug" is that the WAN port and the LAN 1 port are interchanged.
But from functional point of view it works fine.
Yesterday I saw that for the Mi-Nano also the 19.07.6 build was released. But I haven't tested that one.
You can find in the Wiki (see first post) how to flash OpenWrt.
If you want to return back to stock, then you need to have a full dump of the stock firmware.
You can either use an SPI flasher with a clamp (no soldering is required) ... or in case you don't want to open the router you can download a full dump from the Mi-3C thread in the 4pda.ru forum (just use Google translate, in case your Russian skills aren't perfect).
And maybe it also works to flash the OEM firmware binary via BREED, but I haven't tried this, so I can't confirm this for you.
But I assume that you will not think about going back to stock after you have flashed OpenWrt. 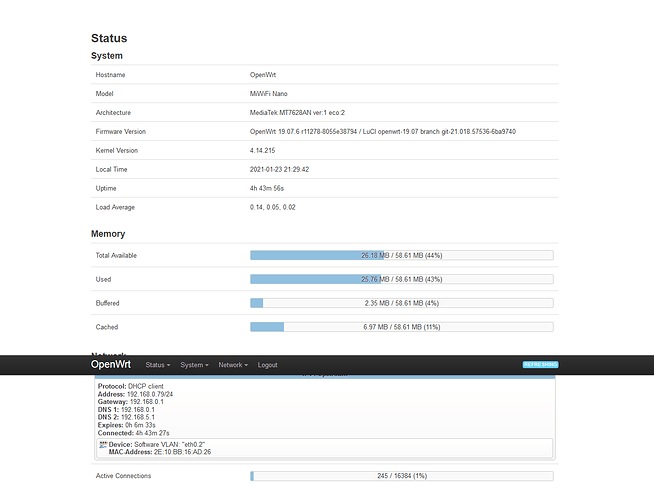 Have been using 19.07.6 for a while, installed today, port interchanged as usual, the only problem I faced is " "A new login is required since the authentication session expired." I guess that have something to do with session cookies, but not any serious issue. The only thing right now I am skeptical is the wifi performance (not encountered any issue ), I mean to say that Mi3C have four antinnas but Mi Nano has two. Thanks !