I am a new user to LEDE, so be sure to ELI5. I have a TPLink Archer C5 v2 running the current factory install + SQM.

I installed it to help me manage the crappy bandwidth I have, which coincidentally is the best I can buy at my home. ( I can only get Century link... and the fastest they will sell me is DSL... 700kbps up/13mbps down ). Most of the time my issues can be described as textbook Buffer Bloat because I have 3 kids, and it seems like the internet is always slow.

SQM handles the issue beautifully, with the exception of 1 thing. I own a ring doorbell. When I have SQM disabled, the Ring doorbell always works... Notifications , video and audio. ( albeit Poor quality video and choppy audio though ).

When I enable SQM, I continue to get notifications from Ring, however the video is completely black. I have SQM configured as described on the setup pages, and have tried all of the different Queue disciplines.

Ring's support pages basically say that if this happens, there isnt enough bandwidth.

Anyone have any advice? Thanks!

Ring’s support pages basically say that if this happens, there isnt enough bandwidth.

I agree with Ring.

You do not have enough bandwidth to do much more than web surfing and email.

Post screenshots of the three tabs in SQM so we can see what your configuration looks like.

I agree with Ring.

Post screenshots of the three tabs in SQM so we can see what your configuration looks like.

This would be helpful.

You do not have enough bandwidth to do much more than web surfing and email.

Is it really the case that this device uploads your video to the internet? Because there should be PLENTY of bandwidth to stream video via wifi between two devices on your LAN, and I assume the doorbell thingy is on the LAN as is the device you're receiving the video on. So it should only bottleneck if they first upload "to the cloud" and then your phone downloads from their server, which is about the stupidest thing I've heard all day and requires Ring to purchase bandwith proportional to their number of customers, and seems like a total waste of resources. EDIT: unless of course there's no receiver device on the LAN in which case you might want to proxy the video to a remote phone or whatever... but it seems like that shouldn't be the default.

So it should only bottleneck if they first upload “to the cloud” and then your phone downloads from their server, which is about the stupidest thing I’ve heard all day

Check it out, that's the point of the product...you can answer your doorbell from virtually "anywhere."

Yeah, I added an edit it seems to me like the device should be able to find a receiver on the local LAN if it's there. If not, obviously you'd have to upload to the internet to get it to wherever the receiver is, but if doorbell and receiver are both on the same LAN and doorbell is sending to the internet and then receiver is downloading from the internet... wow, that's a lousy design.

but if doorbell and receiver are both on the same LAN and doorbell is sending to the internet and then receiver is downloading from the internet… wow, that’s a lousy design.

AAAH! I understand...that does add complexity to the OP's possible bandwidth situation as well...

It might also be intersting to use wireshark/tcpdump to create a packetcapture with someone ringing the ring bell and you trying to watch the video feed, I would especially look for the DSCP marking on the packets.

As a quick and dirty test you could:

and please post the output here (preferably as "preformatted text").
Assuming that you use cake this should show how many packets are dropped during the test.

P.S.: Most of the above requires you to log into your router from a terminal window, in case you are unsure how to do that, please have a look at https://lede-project.org/docs/guide-quick-start/sshadministration for a quick reminder.

Since most five year olds I know can neither read nor write, I am simply ignoring the ELI5 (and before @jwoods' expansion of the abbreviation I was completely ignorant of this, is thjs really a thing?).

From the Ring FAQ...

Can my Ring device run only within my internal Wi-Fi LAN?

Ring products require internet connectivity to connect and send push notifications to your device. Connecting ensures that your Ring device can manage sessions and reach your smartphone or tablet whether you are at home or away.

so be sure to ELI5

User likely has no idea how to do any of that.

Screen shots of the 3 SQM tabs should be easier.

Screen shots of the 3 SQM tabs should be easier.

Maybe, but this will also lack a bit of the information that would be nice to have

Yeah, I agree about my crappy internet. I search for other options ( home LTE, or wireless broadband ) about once a month. It is just wierd that it works with my crappy internet with no SQM, but doesnt work when its enabled.

I know how to navigate a terminal and ssh... I just need to figure out how to ssh into the router as I havent set that up. Probably take a little time reading documentation.

In the meantime I grabbed some screenshots. I have a speedtest from dslreports with both SQM and without.

Hmm. I can only attach one at a time. 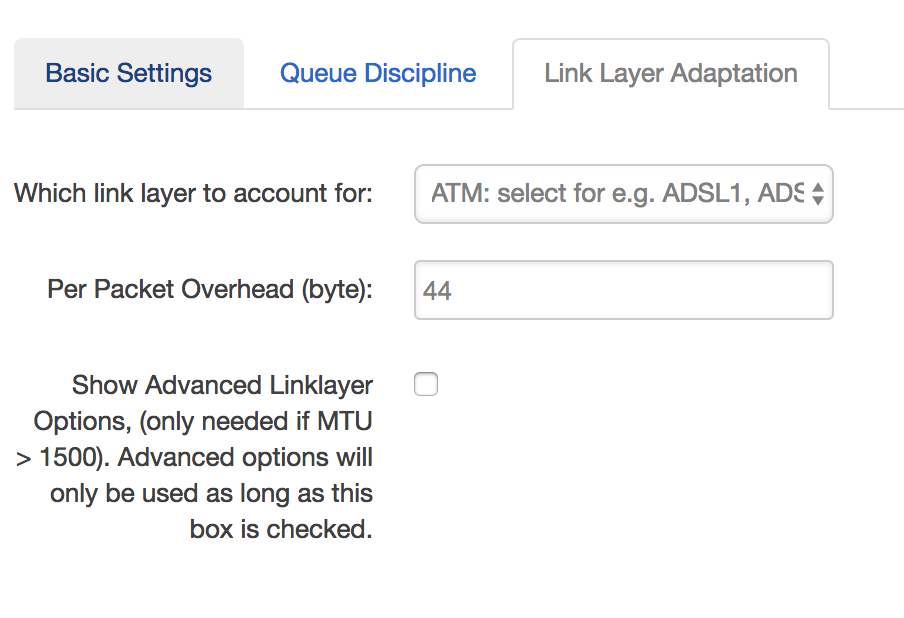 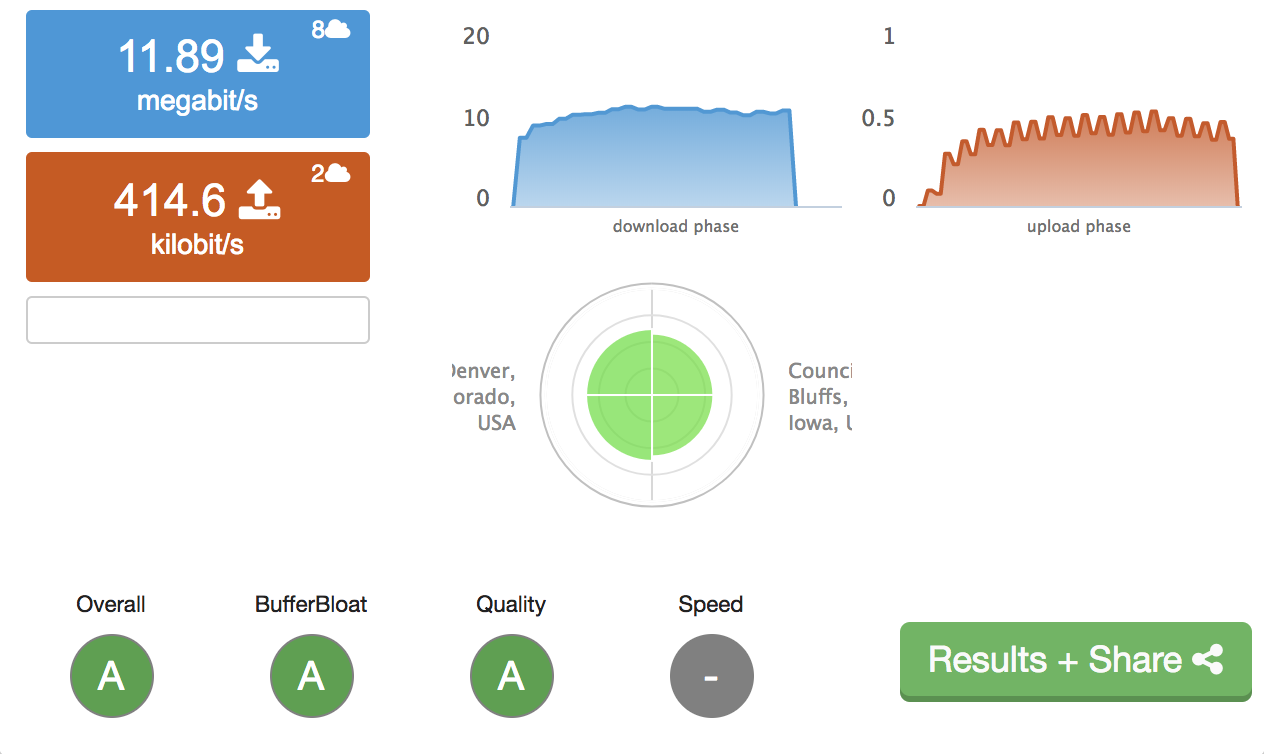 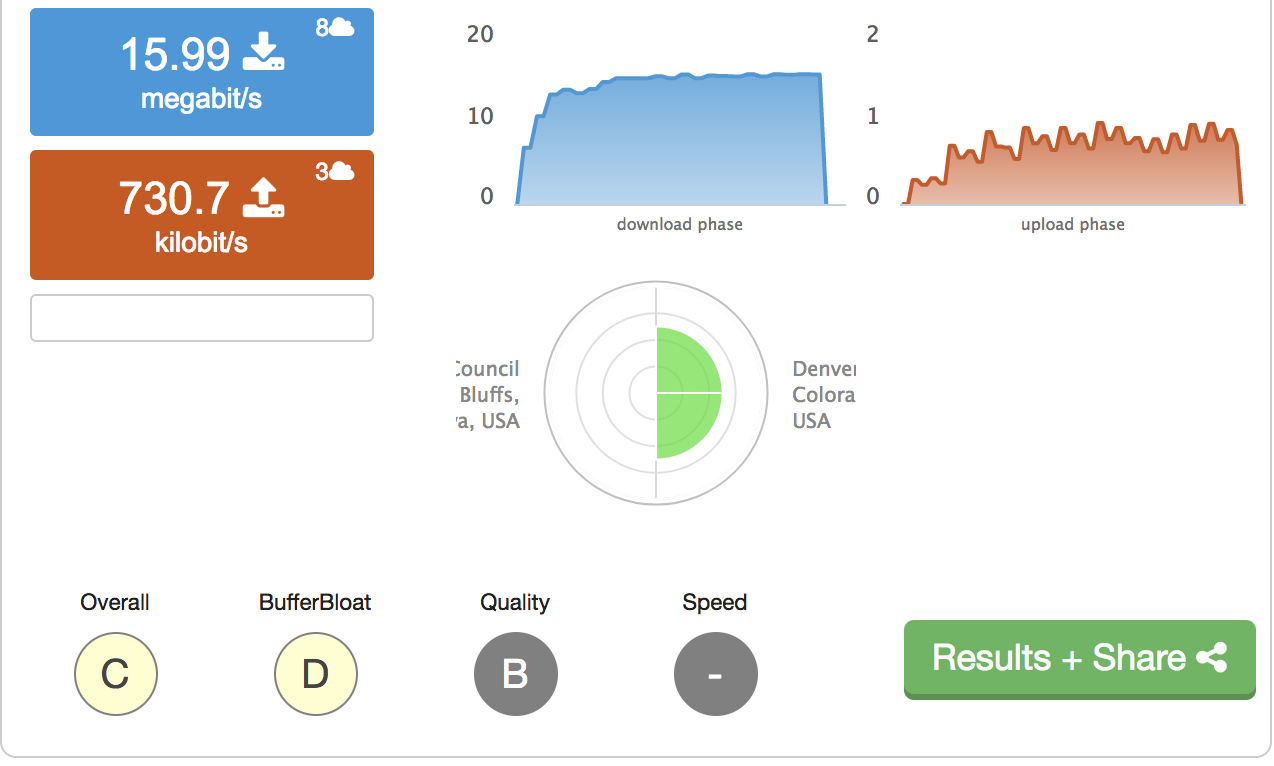 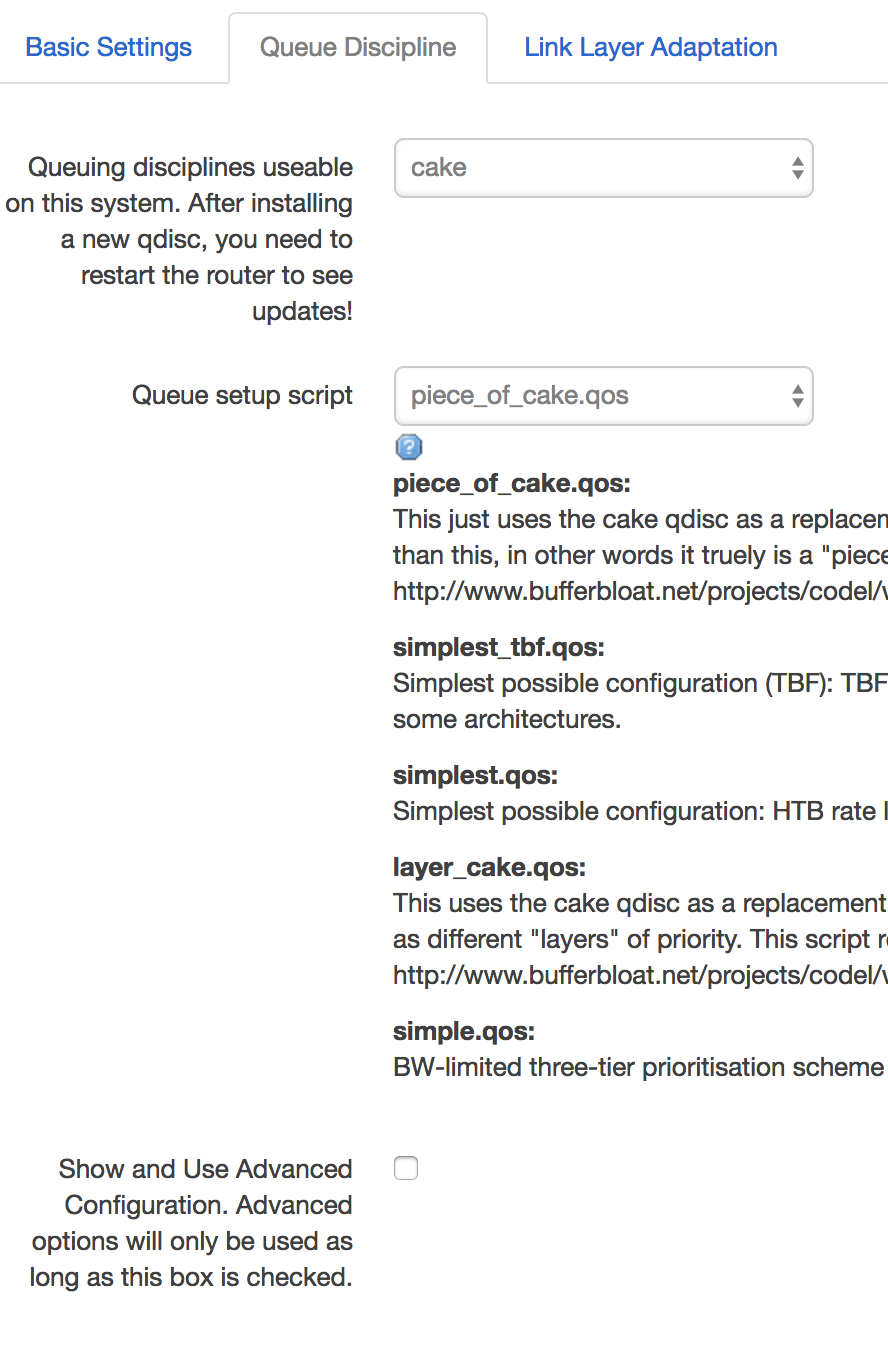 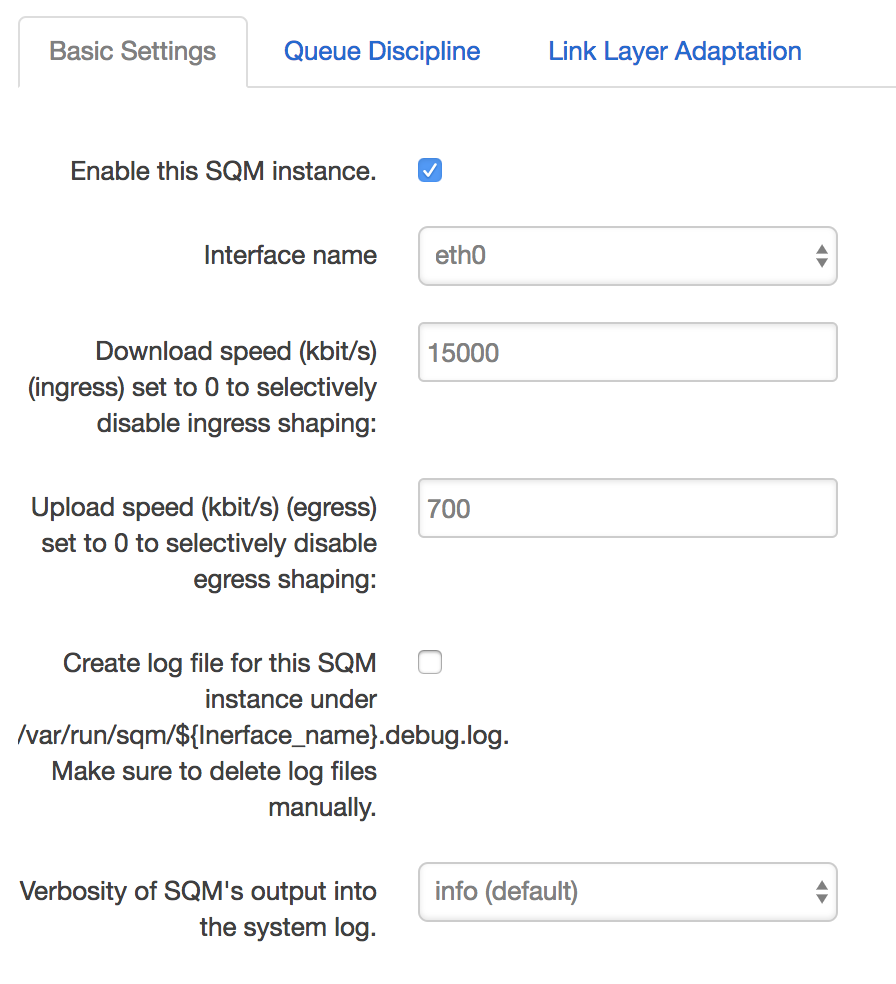 Can you log into the ADSL-modem? If yes it would be great if you could post the stats it presents, at least the up- and downstream synchronization values.

The goodput values reported in the test without SQM seem to indicate a sync value around:

One big difference between no SQM and SQM on your link is the considerable bandwidth sacrifice you give, which might bring Ring from marginally working to marginally not working, though I really have too little data for more than pure speculation on the real issue, but I believe it might be the time to try to optimize your overhead settings in sqm.

When I was tuning Fairpoint DSL on the EA8500 here, with the Fairpoint modem configured in (Bridged) mode - using (40) for the Per Packet Overhead gave the best results & allowed me to set the Egress *Upload speed higher.

The first DSLReports screen shot with all A's indicates your configuration is pretty good.

The problem is you just don't have the horsepower to run everything you want to run.

BroadbandNow has a nice tool for finding Internet providers by zip code. You might see if there is someone you missed...

ok, I twiddled the settings based on input from above, trying to get the throughput up at the same time keeping straight A's

Here is the info I gathered from SSH:

And here is the speedtest. 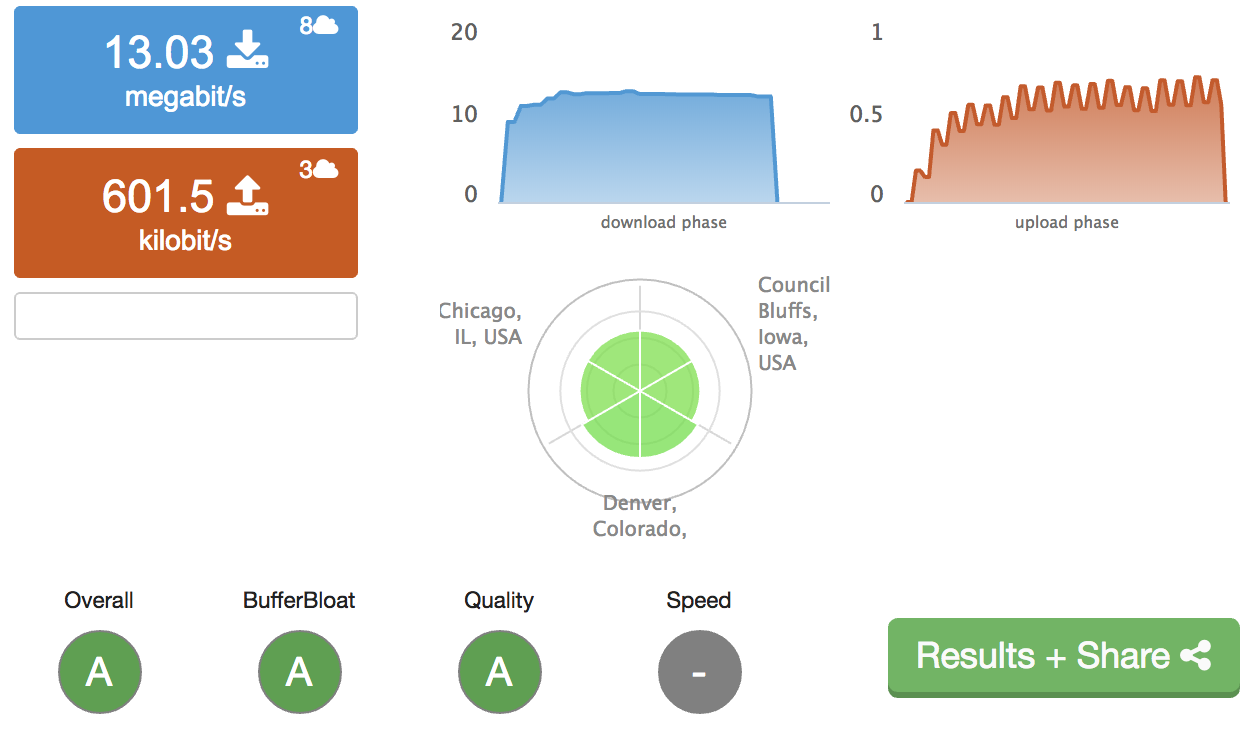 Video still does not work. I will do the test suggested above and post results.