But in Luci->Flash operations->Flash new firmware image booth SysUpgrade images are saying: The uploaded image file does not contain a supported format. Make sure that you choose the generic image format for your platform. It does not matter if I use Firefox or Chrome. I have to find a 16.x image to jump from Chaos Calmer to Lede? But history says there is no OpenWRT 16.

Edit: I didnt want to use the image from mega.nz, because the source is unclear. But it worked. It downgrades to Barrier Breaker. Then I can upgrade to 18.06 (meaning: the 18.06 image is accepted as a sysupgrade), but after that the router doesnt boot anymore. Maybe the 17.01 is really the last working image for this router. My girlfriend is here, she wants to watch a film and I can't fiddle with the router anymore. Tomorrow I will start a new try from the Systemrecovery upwards. I will write the outcome.

Version 18 is likely too large for your router - that's why version 17 is listed as the latest.

The warning is on the hwdata page you linked. 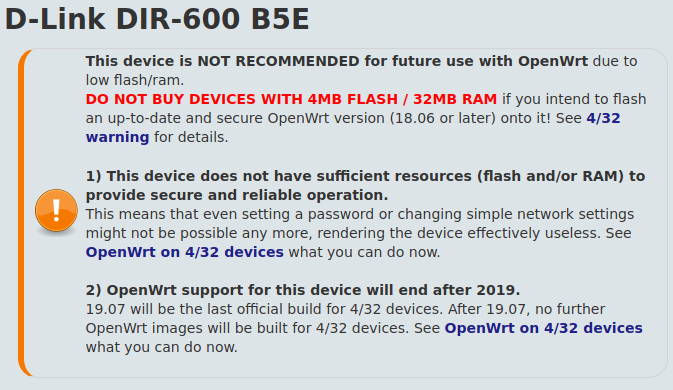 I followed the manual again and got a working Barrier Breaker. But then I upgraded with 17.01 sysupgrade from the wiki page (instead of directly 18.06). It worked. For fun I additional upgraded with the 18.06 version and it worked too. Maybe the jump from BB to 18.06 is to much. After I put my ssh keys on the router, I have 212.00 KB free memory.