I am attempting to build DebianWRT or mcdebian on my Linksys 3200ACM or ASUS rt68u.
I have putty and win 10 64bit I can login to OpenWRT via ssh.

That is the extent of my knowledge. I am asking for an expert to type a guide with images to create DebianWRT on a Linksys 3200ACM or a compatible device. For instance I run on VDSL PPPoE so I will need to know how to configure a pppoe wan connection which I can do in the regular OpenWRT build but I cannot currently do through putty or any type of command line level stuff for Debian.

It would help to learn just the basics first - how to ssh how to install how to check md5 how to select the proper files for downloading how to call those files from ssh how to link from download folder to putty then upload how to execute the upgrade how and what "packages" to install and just a complete rundown and tear down of the whole entire process in one go for a novice network user. Basically just a complete step by step guide through the creation of a linux based router running OpenWRT/DebianWRT from the ground up using standard methods(ssh) Now like I said I would like not only guidance on how to get the install done, but also how to manage and configure it as well. I can manage OpenWRT but Debian - You see if I have to build the router on a OpenWRT interface with Debian running under the hood through ssh - I would not be able to complete this without coming back here and asking for help.

So by natural order - if every step could be included with images and a short summary of clarification of why that step is occuring and what its purpose is would help immensely and simplify the process. 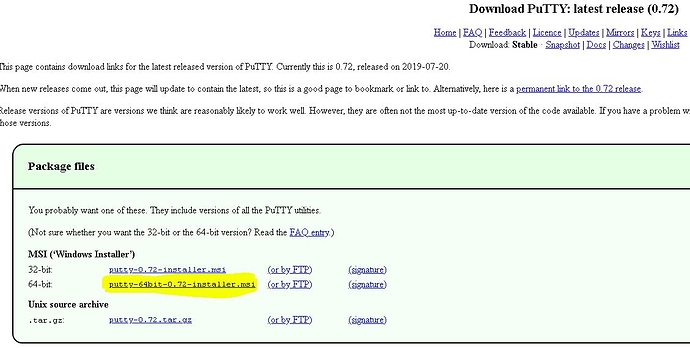 The same format can be used to build modules/implement packages/ssh/and configure firewall code/sqm everything invovled in building a linux router.

If you want to know about building other projects, you probably should contact their respective project sites instead of OpenWrt's (they should know, OpenWrt doesn't).

But to cut it short, OpenWrt isn't self-hosting in the sense of supporting native compiling on the target device (it is always cross-compiled, even if you happen to built for your native arch, and needs to be build on a more general purpose distribution, rather than OpenWrt itself). While there are basic compiler packages available, they are very limited in scope and with the absence of -dev/ -devel packages for just about any software in OpenWrt won't support building much beyond the most simple hello-world sources.

While mvebu/ Marvell 88F6820 is a rather fast target for a router, it's still not really suited nor suitable for compiling (natively or in cross-compiler environments) larger amounts of software, due to the RAM limitations alone (before even thinking about flash wear, which basically mandates external storage from the get-go); it is getting increasingly difficult to link within 32 bit addressing constraints (depending on the arch and its kernel configuration, between 2-3 GB), while you only have 0.5 GB of RAM at your disposal). Even low-end ARMv7/ ARMv8 SBC (e.g. RPi4 or various sunxi, rockchip etc. alternatives) would be a much easier choice.

I have a PCI-E Nic on the way with a spare pc I am prepared to install on another system if given direction.

You could get the ball rolling, by starting/extending a Wiki Page on OpenWrt, and create a framework in that page, where the experts only need to fill in yome blanks.

You are basically asking for an illustrated guide of a (multi-)year-long research subject (correctly using Debian/OpenWrt/Windows together) custom-built for your level of experience.

I don't understand why you wan't to build OpenWrt on a box that is not suitable for building? If it's for the fun of it, then go ahead. Otherwise there are other options like dual booting on Your PC or running a linux distro in a virtual machine or in a container. Maybe the linux subsystem for Windows works, but I have not used Windows at all for more than 15 years so don't ask me how:-) I've used openSUSE as my primary OS for the last 20 years and only occationally used Windows98 in a virtual machine.

Apparently this is not possible so I thought I would ask to get some direction on how to put Debian "under" a LuCI GUI to implement this 2 iptables rules. The idea is just not putting a linux distro on a box. From what I understand Debian is booted via USB on the linksys device running LuCI GUI then you can implement some linux iptables rules which sounds easy right? I mean if it were that easy I could but I don't excalty know what to do from ssh cmds to how to set up the new Debian code.

In the time it would take for someone to teach me this I could probably write a functional linux firewall or some form of Debian running with OpenWRT. Which is probably why there's 1,000 linux distros and custom router code. The issue I see there is the cake/sqm itself apparently it doesn't use the DSCP ingress or something it is rather complicated. That's another issue if I did build my own linux router I would still need guidance on Linux commands and I don't know if there is enough support do you guys know the better linux forums which users compile various code?

Anyway awesome advice guys I just thought it was possible just to given a,b,c instruction and be done @jan I am clearing out a drive to put Ubuntu on and eventually get Red Hat so hopefully I will be saying I haven't used windows since 2019

This should be easy enough I mean it's just formatting the usb then uploading the firmware but like I said who knows what happens after that.. maybe i'd have to still configure an entire debian firewall A quick look at http://dev.debwrt.net/ suggests to me that you might want to look into how active development and support it for that firmware.

I am not even able to sign up on the forum so that gives me an idea about the level of support....

So, ask yourself, and then describe to us, what are the specific shortcomings of OpenWrt that you are trying to address? Maybe we can advise accordingly.

achieve from the perspective of the network/

First, in order to configure a box for pure gaming there are some specifications I would like to set and I do not know if they are linux kernel "based", or OpenWRT kernel "limited" but regardless - my intention is to build a box with the lowest possible latency and the best possible traffic shaping for udp connections.

is a rule which I understand to be OpenWRT kernel "limited" or some aspects of ingress DSCP marking - but these could also be cake limited because I know this shaper is not configured for this purpose.

Second - there are some other things I would like to attempt using linux iptables sort of rebuilding the firewall to allow checking of udp streams before tcp streams I do not recall exactly what the process is. But this involves sort of reconfiguration of the firewall tables or something some foundational aspect of the firewall. This sort of thing just freedom to compile code.

OpenWrt is quite flexible and powerful for an embedded OS.

This is solely for a latency build like a nitrogen o.c cpu - well not as sophisticated but built with custom tables.

Remember that you are running this on embedded devices

I have broadcom NIC coming in with a spare setup which I may be able to port if I can determine what OS to use because from what I have been seeing a purely linux limited box would require learning linux language and I do not have time for this.

I came from tomato and have been attempting to configure my modems for a few years. I came to OpenWRT because of cake and I fear there is no next step just coding your own box.

I mean if you take checkboxes - enable dscp ingress/egress
take some drag and drop modules where I tell the router to prioritize this udp ruleset first before anything
assigning ip's into tiers/bins, setting lan traffic dscp marks

For me personally I've tried a number of input/forward/prerouting rules and those ended up being very cumbersome because apparantly I could not read what was happening with simple dscp markings in wireshark or configure them properly and thus concluded the OpenWRT kernel config has some conflicts with some of the commands I was using. Some did not seem to work or I do not know how to use them. I could not use mac match or did not know the proper way to do so but from what I see in the forums I am executing the code correctly but maybe these other users are on custom linux kernels like Debian which some are - so the easiest thing to do is stick with LuCI GUI and implement a Linux Kernel to keep things simple and just punch in iptables commands and build a box that way. But in either case I think some issues like I do now know which way to configure the traffic out or in lan/wan/local/remote or how to test on each of those platforms.

I used this guide for information and ultimately fell short in capability to execute commands properly(match mac address) or track that it did match. But also just filling in the blanks to this guide because it is not complete for my use, and there is little support for executing iptables commands to build a router for gaming there is barely support for DebianWRT which was compiled in linux using the LuCI interface for the purpose of utilizing a linux kernel.

@warchief What you are asking is a non-trivial task, you might find someone with the time and inclination as a paid opportunity, but why?
Just add those iptables commands via Openwrt's Custom commands page. This package adds the functionality - https://openwrt.org/packages/pkgdata/luci-app-commands

now it is time to study linux hardware fundamental, and then realize why your plans never works then write your own linux drivers for the debianwrt, then dont forget to share it. you will never look back to tomato.

learn more about udp fundamental and find out the way to make it faster instead of shaping,

@warchief, this is a good idea. a good Debian openwrt will be a good open platform for GPU enhanced routing like packetshader.