actually I use a Fritz!Box 7490 at home that we got from our ISP. For most cases it is more then sufficient. Unfortunately if someone is watching Netflix or something else, I got these ping spikes from 20ms up to 1000ms and more every 5 seconds or so. This is really annoying me

We have a 25 Mbit internet connection, but the load in the Online Monitor of the Fritz!Box only shows about 5-7 Mbit load. The PC is wired to the router, netflix is watched via an nVidia Shield.

I hope to get some help / advise from you guys

All router I found and assume they might be good do not have a DSL modem included. So can I use my 7490 as a modem? What would be an alternative?

We have 2 mobile phones, 2 PCs (1 wired, 1 wifi), nVidia Shield (wifi), av receiver (wifi) and some Echos connected to the Router.

What router/setup would you recommend?

You could try implementing SQM if you haven't done so already.

Is the 7490 OpenWRT'able? It is a stock Fritz!Box. So I guess I can't install this package on it?

but the load in the Online Monitor of the Fritz!Box only shows about 5-7 Mbit load

For FullHD Netflix, this is about right. Check the CPU

I could not find it in the Table of Hardware.
But even if you decide to replace it, you may need to keep it as modem only. Only a handful of modem/routers have functional modem in OpenWrt, so they are mostly used as routers.

Thanks @trendy. But I read that the 7490 has no modem mode if I read it right.

That is unfortunate. Then maybe find some cheap modem, like Zyxel P660 or VMG4005-B50B and connect on it the router of your liking.

Do you require any phone functions of the 7490 (VoIP PBX, FXS Ports, DECT base, ISDN)?

No, we I only need Wifi.

Assuming your 25 Mbit/s line is VDSL2, a used BT Home Hub 5A would fit.
Conversion to OpenWrt is difficult, but you could buy one with OpenWrt preinstalled. OpenWrt upgrades can be performed easily like on other devices.
Outside of the UK, you need an (inexpensive) adapter for the power plug.
The device's CPU is fast enough to handle 25 Mbit/s with SQM, and likely some more. Certainly faster than the WRT54. WiFi is also good.

To turn the Fritz!Box 7490 into an xDSL modem, do a factory reset (German article):

I am surprised that the WRT54 handles 25 MBit/s. That would be without SQM, I guess?
Did you set it up as a router or as an access point?
When I used a WRT54GS as a router with PPPoE, SQM and WiFi, I found that latency increases, and stability suffers at speeds 10 MBit/s and above.

Now my ping is stable no matter if Netflix is being streamed or not.

I suspect the WRT54 is limiting the throughput for WiFi clients because of its slow CPU, and improving latency for the PC this way.
However, the latency for WiFI clients will likely be high.

Instead of Netflix + ping, I suggest to run the DSLReports speed test on your PC to check the latency under load, both with and without SQM.
For more insights, you could also run the test from a WiFi client on the WRT54. However, do not rely on this WiFi test alone, a wired PC should be the main test client.

thank you for your help. At first it looked like the WRT54 did solve the problem. But at a second look the problem occured nevertheless which device handles the WiFi. So I removed the DDWRT again and performed the DLSReport as you mentioned.

Could you explain to me what this result means in this case? What causes the bufferbloat? The integrated DSL modem? The Router Hardware? Or is it something I can't avoid?

The DSLReport was done on my cable connected PC during streaming with the nVidia shield.

Please redo the test when the line is idle: switch off clients or unplug them, disable WiFi, stop background downloads on your PC.
The DSLReports test itself generates network load as needed.

I did the test again with WiFi disabled and only my PC connected with no background noise.

But I assume D is still not a good result.

An idle latency of 1712 ms is quite bad.
Could you show the status of your xDSL link please (error counters etc.)?

I'm not completely sure what you mean with xDSL link, but this are all information I got in the Fritz!Box about the connection. 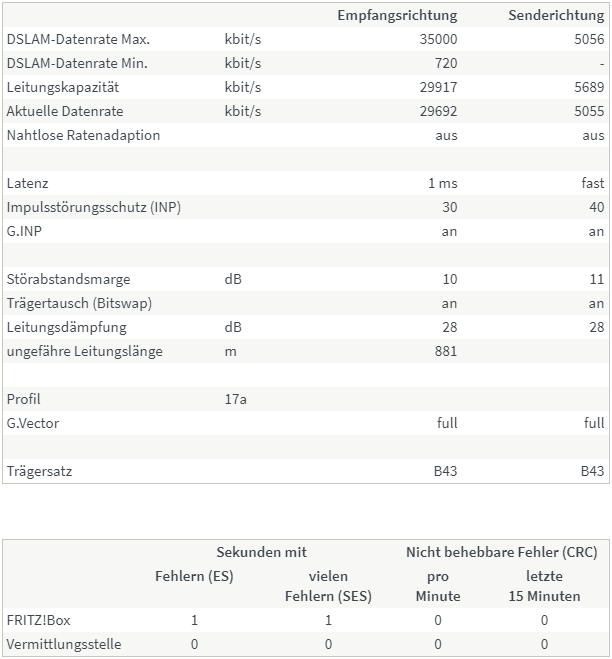 Is that what you were asking for?

Edit: Unfortunately on the third picture aren't a lot of information as it seems that they resetted after the restart when I removed the WRT54.

Yes, this is what I wanted to see.
I am not a DSL expert, but the notch at 1.5 MHz looks unusual.
Could there be a problem with the DSL wiring?

Do you mean in general or inside the house?

I meant in general, but anything up to the phone socket is the ISP's responsibility.

Is the FritzBox connected to the official phone socket (TAE1 in Germany)?
Do you have a replacement cable you could try?
Is the phone socket the only one installed on this line?

Otherwise, lets see if someone else wants to comment on the DSL spectrum. @moeller0 maybe?

If it is in the hands of the ISP then it's really bad. As the service is horrible.

Yes, the Fritz!Box is connected to a TAE socket. The line enters the house in the basement. Have to check how it is laid to the TAE socket in the ground floor.

I have no replacement cable yet. You mean a cable from the TAE socket to the Fritz!Box? I could order one and test it.

Apparently the notch can also be caused by DPBO (Downstream Power back-off), which would mean the wiring is probably OK.

Other possible causes for the high latency could be an overloaded uplink at the DSLAM or the BNG.