I ordered a TP-LINK AC1750 Archer C7 from Amazon, 'new', sold by Amazon for $70, and what I received was a V2 with a serial # ending in 137, which means it was made 6 years ago. It also appears to have been opened but not used. I contacted their customer support and they knocked $15 off it. Should I keep this or return it if I can get a new one from Staples (V5) for $65?

I am just upgrading from a WDR-3600 to get more flash and RAM, but wasn't looking for a big performance bump (although hopefully the radio is a bit better) as I have a DSL line...

I’ve got five Archer C7v2 units. They’re decent APs at US$10-20, but not worth any more than that, nor would I buy another one at any price.

The ipq40xx units with 128 MB of NAND flash and 256 MB of RAM far outperform the aging wireless of the ath79 units of that era. Two EA8300s that I have up provide better coverage than four Archer C7v2s. That specific unit I selected for my somewhat unusual use patterns, other ipq40xx devices are available as well.

Edit: Why the change of heart for me on the Archer C7v2? The next-generation devices fell from ~US$200 to $100-150 over the last year, and support under OpenWrt for models available in the US became strong enough to meet my needs.

While not as good as the £34 price on the EA6350, Amazon US, sold by Amazon, has it at a comparable price to the Archer C7 you're looking at, with free returns. (v1 and v2 are not supported, though it think it very unlikely that anything but a v3 would be delivered at this point.) 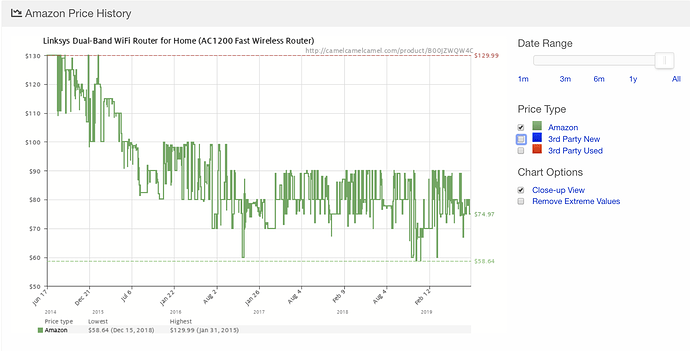 $70 for Archer C7? You should return it, and they can bundle the 3 antennas together, and put them somewhere.

With the price aside, the FLA space is limited and not what I would get in a new router.

The differences between a c7-v2 and the current c7-v5 are mostly academic, the c7-v5 is using a slightly newer SOC, clocked 30 MHz faster - which should be close to negligible. The c7-v2 has the advantage of using a dedicated CPU port for WAN, while the c7-v5 has been 'cheapened down' to only use a single CPU port - which could be an issue if you had a 1 GBit/s WAN connection and if the archer (any h/w revision thereof) could actually reach those speeds for traffic passing through the CPU (-ports), but given that its throughput for routed traffic is far below that figure, it's a less noticeable difference. In terms of wireless connectivity, both are close to identical, the 5 GHz wlan is the same either way (QCA9880-BR4A), the 2.4 GHz wlan is provided by the SOC itself (QCA9558 vs QCA9563), which shouldn't make much of a difference. There are some reports that the newer h/w revisions are slightly better in terms of wireless performance, which could be down to improvements of rf quality (the analogue components behind the phy) in newer designs - or it could be a form of placebo effect; both versions should be 'good enough' though.

I don't think you'd 'feel' any difference between the archer c7-v2 and c7-v5 in practice, the fact that you got sold 6 year old stock however would worry me. If a 15 USD rebate is enough to stop you from worrying about that would be for you to decide.

Very personally however, I would not pay 70 USD for an Archer c7-v${whatever} single core mips router clocked at 720-750 MHz in 2019, nor would I shell out 55 USD for what is effectively a used device. There have been improvements among these kind of devices recently and multi-core routers do have quite noticeable effects, with newer WLAN chipsets bringing their own share of improvements as well (even in case they might look worse on the spec sheet, a 2x2 wave2 ipq4018 WLAN introduced in 2016 is often performing better than a 3x3 wave1 QCA9880-BR4A introduced in 2013). Especially the ipq4018 platform (4*710 MHz ARMv7), as mentioned by tapper and jeff, are very strong contenders here, priced even (slightly) below the archer c7 and providing a way newer SOC/ wlan.

That said, the archer c7 (regardless of the h/w revision >=v2) is a solid device, which will continue to be supported by OpenWrt for quite some years to come - but better devices have emerged in the mean time, and some of them are even cheaper.

I was able to buy a EA6350 at Best Buy locally, which allowed me to both match Amazon's current price and verify that it is a V3 device.

I installed OpenWRT without issue, save the lack of LUCI due to it being a snapshot install. I'll do a full install this weekend when I have more time. I hadn't really used a snapshot before, is this device supported in the upcoming 19.07? Is there a rough release time? The snapshot, I think pretty much makes me do all the package installs on the same day as the system install.

Also it looks like it's not necessarily easy to revert to stock firmware so there's that, which should not be an issue if there is 19.07 support and I don't run into any hardware issues in the return window (2 weeks).

It does look like capable hardware, hopefully the radio works better than the WDR3600 I am currently using (the radio there actually works fine, just some complaints about ipad usage upstairs at the other end of the house).

This could definitely be a < $100 'go to' device once it hits a stable release. Hopefully the Instagram picture issue doesn't happen with my ISP... (or perhaps that has been resolved)

is this device supported in the upcoming 19.07?

Is there a rough release time?

Aside from soon, no.

Many of us consider master a stable release. I haven't checked the logs recently, but I don't think you'll see much "new" between your snapshot and 19.07. If anything, there will be less, as master has moved on significantly.

I'm not looking for anything new, just packages that match my system for more than a few days. I appreciate the work being done to support new hardware but like the stable releases for that reason.

I'll try to switch over to this router on the weekend and update the thread on how it works for me...

I installed OpenWRT without issue, save the lack of LUCI due to it being a snapshot install. I'll do a full install this weekend when I have more time. I hadn't really used a snapshot before, is this device supported in the upcoming 19.07? Is there a rough release time? The snapshot, I think pretty much makes me do all the package installs on the same day as the system install.

See here, should have LuCI included as well already

That is also a rolling build for now without any insurance of compatibility later on, at least that's what I'd assume since it's called -SNAPSHOT.

OK got the EA6350 set up yesterday using the 19.07 snapshot without issue, and it seems like the wireless is negotiating much high rates as well (I see > 500 Mbit/s to multiple devices). It's a keeper, the C7 goes back. I'll mark this as 'solved'.

I'm running Ubuntu , if i download 19.07 Sysupgrade to my desktop can i then plug in the EA6350 and install the sysupgrade from hard drive Via SSH as that is all i have working?

Yes, use the sysupgrade tool.

Do i type SSH root@192.168.1.1 then at the command prompt type sysupgrade at that will give me options to access the files on my computer hard drive and desktop?