I have two OpenWRT devices. One acts as the Router and is connected to the modem, the other device is wired to the Router (in a LAN port on both sides) and acts as a simple AP.

Why, though, does the 'Associated Stations' list on the AP not know the hostnames of the connected devices? At best it shows their IP address as hostname but often it only has a question mark.

Did I do something wrong? 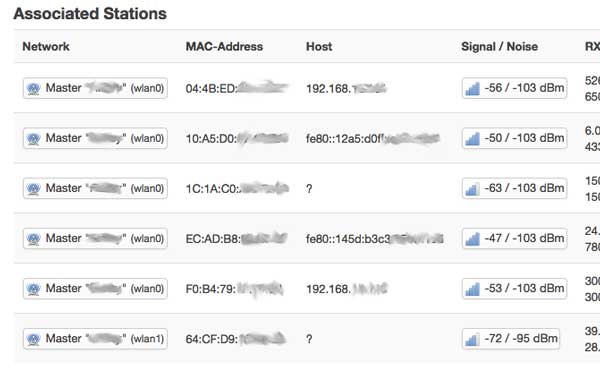 I'm having a similar setup (Main Router OpenWrt >> AP OpenWrt). I had to untick "Filter private" under Network >> DHCP and DNS >> Advanced Settings and put the DNS server and Gateway IP of my main Router into the LAN Interface to show the real hostnames on my AP. For some reason it doesn't work for my guest LAN/Wifi Interface/Network, so all the guest clients which are connected to my AP are showing as "?" in Luci. I guess it's related to my ebtable setup (to fully isolate guest clients)... Af…

Stupidly I didn't think of including 'Associated Stations' in my search.

This is indeed the same problem and disabling 'Filter Private' (under DHCP and DNS -> Advanced Settings) did the trick.

I just 'unsolved' this as it turns out that it's not fully solved.

Disabling that Filter Private option means that the two IPv4 addresses are now resolved to a name but I still have a bunch of question marks and a hole bunch of fe80: addresses in the Associated Stations list instead of their hostnames.

The fe80 addresses are link local ipv6 addresses. They are automatically generated based on the mac address of the interface, hence the dhcp server doesn't know anything about them and therefore cannot update the hosts file. What you could try is to add them manually in /etc/config/dhcp or in Luci under Network/Hostnames.

Any idea what's going on with those question mark host names?

I am not using the wireless functionality of OpenWrt, so I am not able to investigate any further.
My guess is it doesn't know the IP that the host has. Try to ping from the dumbAP these particular stations and see if it changes.

Yes, pinging one the of 'question mark hosts' makes it show up in the list.

It looks as if the AP doesn't do a DNS lookup to populate that list. But why do some hosts show up but not others?

It looks as if the AP doesn't do a DNS lookup to populate that list.

To do a nslookup, it should know the address first. But since it is a dumbAP, it doesn't participate in the dhcp packet exchange in any other way but forwarding the frames. Therefore it doesn't know addresses unless there is some way of communication.
Check the packages arpwatch, addrwatch, and arp-scan. Maybe they can help in automatically adding new stations in the list correctly.

Thanks, I'm working with addrwatch now. It does seem to find the hosts when started from the command line but so far it doesn't have any effect on the Associated Stations list. I need to find out how to get the right process to notice the results. Anything that addrwatch finds does not end up in the ARP cache.

Also, I've discovered why one of the iPhones does show up under its hostname and the other doesn't. I had used that iPhone to visit the web interface so obviously it got recognised as a client (and hostname). Doh!

I am trying to solve this without requiring any additional packages (and arpwatch, addrwatch, and arp-scan did not seem to work).

What I have found so far is that doing a basic ping sweep:

on the local LAN works well. When devices show up in the sweep they get put in the ARP cache and that makes them show up in Associated Stations.

The challenge I haven't solved yet is that the ARP cache only holds a few dozen hosts (and even non-existent IPs are added to the ARP cache) so as the sweep progresses through the 254 addresses the earlier ones get removed again.

You could reduce the range of the scan to a smaller part of the network.You won't serve more than 20 clients on a single AP anyway.
You could omit from scanning IPs that will not connect to this AP or that are outside of the DHCP range.

Sorry for the late reply but I just added a second AP and had the same problem. Here's a more efficient fping recipe which runs faster and doesn't blow the arp cache:

This topic was automatically closed 0 minutes after the last reply. New replies are no longer allowed.