I have a simple one that has gotten me mad for around. Is there a way bypassing the authentication prompt in VLC when plugging a NTFS drive? OpenWRT detects the drive fine but I have not been able to browse properly. Can't find proper info into this.

Any help will be appreciated.

Instead of accessing the SMB share via VLC directly, mount it. You can use mount.cifs on Linux or just attach a network drive on Windows via Explorer. That way, all VLC does is request data, and the kernel/other userspace component handles authentication.

Example for mounting a SMB/CIFS share on Linux: https://www.getfilecloud.com/supportdocs/display/cloud/How+to+properly+mount+a+CIFS+share+on+Linux+for+FileCloud

From your title I assume your setup is similar to: NTFS USB Drive -> OpenWRT Device -> SAMBA Share <- VLC Client.

Thanks for the info. The reason why I'm using it like that, it's because I'd like to watch content on the cellphone or tablet. I use to do this without problems but using FAT32 over SMB and VLC.
I don't know why it is so troublesome with NTFS. The OpenWRT detects the /sda1 fine.

OpenWRT detects the drive fine but I have not been able to browse properly.

Are you sure you can access the contents of the drive from within OpenWrt?

i can use also HDD's with HUB & multi partitions

Maybe a better way to watch that content would be dlna instead of samba ... of course if the filesystem is correctly mounted and readable by minidlna.

What options did you passed on mounting that ntfs drive?
Did you use umask=0

What options did you passed on mounting that ntfs drive?

All is automatic , i mount nothing

My mistake I thought you where Lebzul with problem of accessing ntfs drive via cifs.
......In config you can set options to pass in automatic mounting.

Not sure. I am using SMB4 with default config.

I have an EA8500 which is barely empty space. If I add minidlna, it will reach its limit. SMB takes a few MBs.

If I add minidlna, it will reach its limit

I am not sure how is that. I previously had miniDLNA running on Archer C7 which had only 16MB flash, total! And that was 18.06, so the firmware size hasn't changed much since then.

Probably yes. The issue is to have both, Samba and DLNA.
Above this, the main concern is to avoid the "user authentication" in VLC while plugging a NTFS device. With FAT32 goes straight.

Above this, the main concern is to avoid the "user authentication" in VLC while plugging a NTFS device.

So your goal is to install minidlna, you should have already mounted your drive on router (physically better than trough cifs client to avoid out of memory issue, but this depends on your specs and other software running so you could... I make it trough cifs on a router with 24 MB ram).
Make sure that directory containing media is present on filesystem before running minidlna (it will create a database and without media it will be empty or if the directory of media content is not present at start of minidlna it will exit).
VLC on android will find automatically dlna content ready to be watched.

Not really. I've been using SMBv3 with VLC and a FAT32 USB for watching stuff with my cellphone. Recently, I tried to do the same with a NTFS drive but keeps asking for authentication that I don't know about.

I don't know which one is better.

no problem with hdd NTFS / GPT 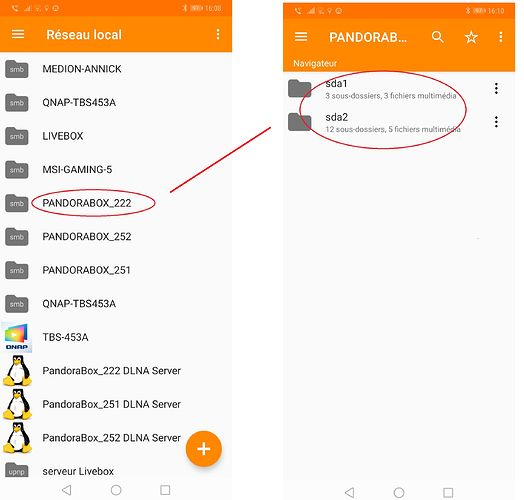 Mine detects it too but when I click the /sda1, an authentication prompt appears. That does not happen with FAT32

About samba maybe you need to check options passed to that share , without authentication the samba user should be nobody if I remember well the base configs, so when your ntfs is mounted if without umask=0 you should have authentication issue... but if samba needs auth for that share maybe is set so in samba config and in /etc/samba/smb.conf.template.
Check that files and access rights on that mount point.
When samba is running and drive is mounted:
cat /etc/samba/smb.conf
mount
ls -la mountpoint/parent/dir (the upper directory)

OK, presuming that the drive is connected directly to the router and is properly mounted as in you can actually list the contents of the drive on the router, there should be no problem serving both SMB and miniDLNA. I had that on my modest Archer C7 and that was OK. The drive was an NTFS so there is the issue of the permission, but serving miniDLNA will not have that issue.

** Mount file systems
-> nothing that is automatic

** Mount Points
-> nothing that is automatic