My setup is as following:

(Wifree) hotspot===>USB AWUS036nh<===>Raspberry PI 3 Configured USB WIFI to connect to hotspot. (There are multiple hotspots available and i have made interfaces to 3 of them with the USB radio)

Now i would like to distribute the connection through the build in wifi and ethernet port of the RPI3.

I am not sure how to do this, Firewall, bridging? 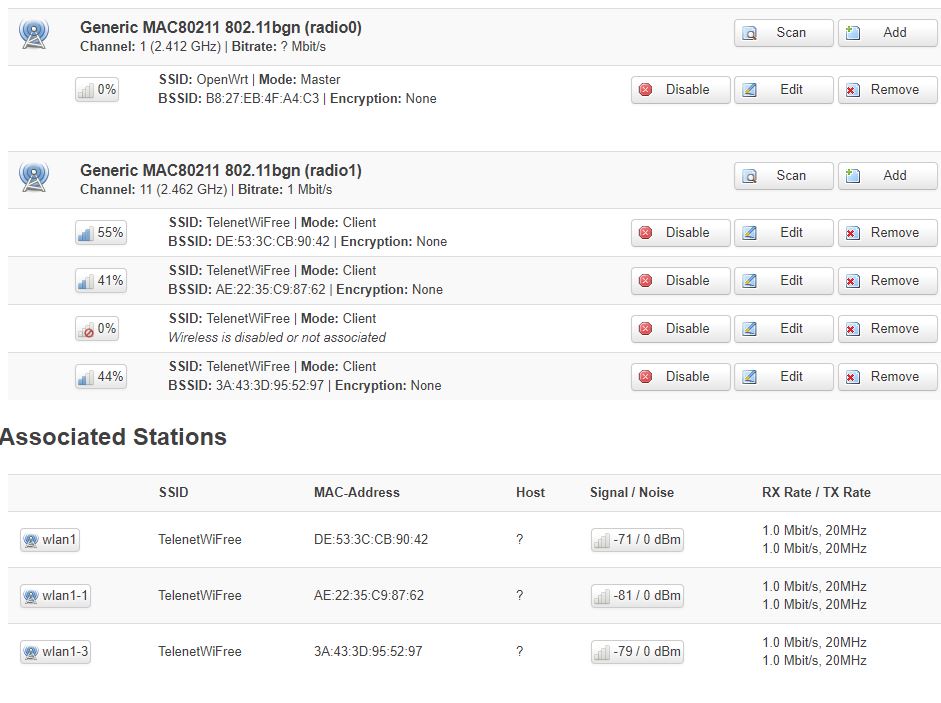 What you want is called a routed client. It works very similar to the default setup of a standard home router, except that the link to the Internet is wireless instead of a wired connection to your own cable or DSL modem.

There should already be a wan firewall zone and maybe a wan network. These default settings are suitable. If you don't have a wan network, create one. Be sure to name it "wan" and not "WAN". Make it a DHCP client. Go to the physical settings tab and attach it to the wifi client that is connected to the hotspot. You should use the one with the strongest signal and disable the other two. The wan network must not be a bridge. Also associate the wan network with the wan firewall zone.

After doing that, go to the main status page and see if you have a wan IP address. If this address is in the same range as the lan (192.168.1.X), you will need to change your lan address to something different.

Your lan devices should now have a route to the Internet.

First of al thank you for your detailed answer mk24, this makes sense and its more understandable now how LEDE works. Ik played a lot with dd-wrta few years ago so the concept of DHCP, subnets, etc do ring a bell, but still a few things that are not clear.

2)I deleted the firewallrules that where already present. There where green and orange blocks with arrows pointing from one to another if i can remember it correctly. Dont know how to make it again like that.
Is this sufficient?

5)Would it also be possible to connect with them at once and maybe quadruple my speed? When there are 4 present ofcourse.. The "Wifree" is provided by my ISP but they limit the speed on one connection because yoyuare essentialy using someones home connection. If i could put 4 connections toghether nobody gets hurt only my internet goes much faster

Ok figuring stuff out by myself , to answer my own questions, and for someone looking for the same answers:

All your users (wired or wireless) should be on the existing lan network. The default configuration is that it has a DHCP server.

The only thing on the wan network is the client wifi that is receiving Internet from the hotspot.

The default firewall rules have a "lan" and "wan" zone which is already set up to forward outgoing traffic (Internet requests) from the lan to the wan.

You can look at mwan3 to operate multiple links to different sources of Internet. In that case you would have "wan2", "wan3" etc networks. This is unlikely to increase performance if the hotspots are simply in a bridged network that has only one ultimate source of Internet.

If one of the hotspots you are connected to goes completely off the air, the other activities on the same radio will stop while it searches to reconnect. So you're not increasing reliability unless you also deploy a script to stop searching for a hotspot that is off the air.