Routing from IPv6 to IPV4 only stations

I've been reading a lot on routing IPv6 traffic to IPv4 stations but didn't find a conclusive solution. Suppose there are legacy stations in the network which are IPv4 only or can't be assigned IPv6 addresses so let's get that off the table. In the picture below, how can the terminal on the far left reach the stations on the far right? In the case of a full IPv4 network, this would have been accomplished through NAT, what would be the possible solution here for IPv6 WAN to IPV4 LAN in OpenWrt? Creating Virtual Interfaces with IPv6 addresses and mapping them to IPv4 Interfaces? Thank you in advance. 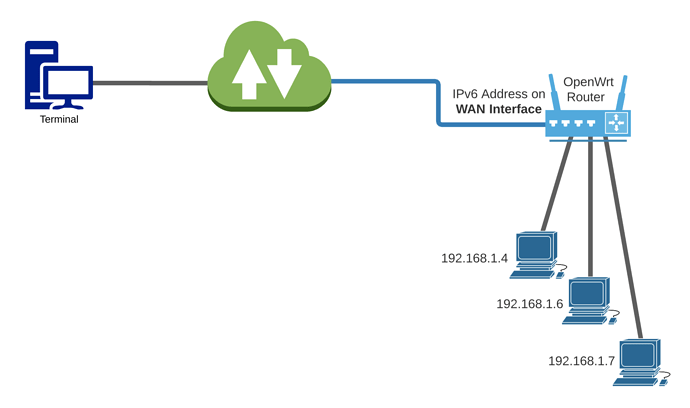 IPv6 is a different protocol than IPv4, if your clients don't speak IPv6 (nor have an IPv6 address), they can't talk to IPv6(-only) stations, there is no translation possible.

The only approach would be providing them with IPv6 accessibility, e.g. by tunnelling (if your ISP doesn't support IPv6) - the difference here is that the IPv6 traffic is encapsulated to pass through an IPv4 segment, but both ends (down to the applications) still need to support IPv6, in order to use it.

--
I vividly remember the IPv6 enablement packages for windows 2000 XP…

Thank you for your response.

However, RFC 6144 makes a reference to "IPv4-converted addresses", defined as:

That's the use case my question refers to. 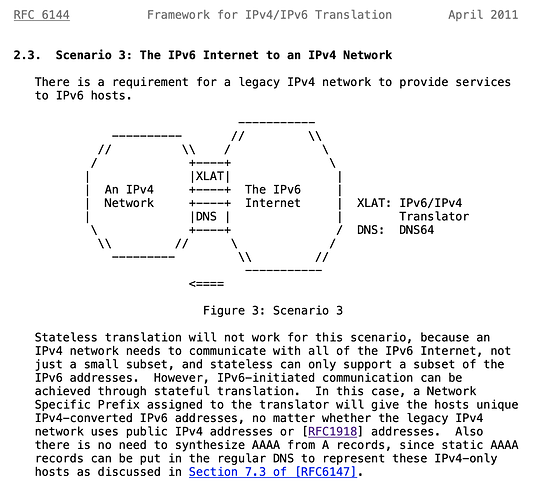 However, RFC 6144 makes a reference to "IPv4-converted addresses", defined as:

That's the use case my question refers to.

(Also, I assume you didn't read the RFC and note it was submitted by telecom companies like T-Mobile who don't have enough IPv4 addressees available for all their clients - which is the opposite of your scenario.)

there is no translation possible.

This isn't quite right. NAT64 can give IPv6 devices a way to connect to IPv4 only devices. I actually ran my whole LAN IPv6 only using Tayga for NAT64 for about a year. It works well. Look into the Tayga application, I don't know if it's available on OpenWrt but if not you can run it on a Raspberry Pi or some such

Set up a tunnel/VPN between the terminal client and OpenWrt.
Provide a private IPv4 address to the client through the tunnel.
Using any type of NAT is the last resort that you'd best avoid.

(Also, I assume you didn't read the RFC and note it was submitted by telecom companies like T-Mobile who don't have enough IPv4 addressees available for all their clients - which is the opposite of your scenario.)

Yes I read the RFC document which appears to be reviewed and published on IETF, doesn't appear to be submitted by T-mobile. Various manufacturers are already doing this translation using a combination of NAT64/DNS64.

Thank you. I did do that last month. But wouldn't using end to end VPN can cause IP conflicts especially if the local private IPv4 addresses are managed by IT and beyond my control?

Thank you for confirming. Tayga is infact available but was looking for someone to share their experience and confirm that can work in this situation.

If the issue is relevant, it's possible to mitigate with custom netmasks/metrics or policy-based routing.

I wasn't being nasty, I asked if it's installed.

doesn't appear to be submitted by T-mobile.

If you don't have a something useful to contribute, then don't.

So I guess it's not installed:

(It's getting tiring that people think I'm being nasty, when they won't even answer simple questions needed to assist them with their inquiry.)

I would appreciate an apology.

Thank you for the clarification, I edited my original response to you.
You're referring to RFC6877 464XLAT (Stateful AND Stateless), while I'm referring to RFC6144 NAT64 (Stateful OR Stateless), causing the confusion. They're similar, former dependent on the latter but not the other way around, but it is a worthy contender for this use peculiar use case. There is a 464XLAT package available for OpenWrt I assume CLAT only.

If you don't mind watching video, this should help:
https://ungleich.ch/u/blog/ungleich-tech-talk-2-accessing-ipv4-only-devices-via-ipv6/

I have a written article on the topic, which goes into supplying 464XLAT in the event that your IPv4 device also required v4 Internet: