Router as managed switch/wifi hotspot and packet processing on x86

I use an Archer C7v5 to manage two WANs (500 Mbit from different ISPs) as load-balanced and one failover (200 Mbit 5G) by using MWAN. That works, but at a maximum throughput of ~200 Mbit due to the MWAN processing. I understand it is the best the good old Archer C7 can do. On a typical day, both WAN1 and WAN2 are used concurrently, and the traffic almost exclusively goes from/to Wifi.

In addition, I already have OpenWrt running on an x86 (Mobo GA-Z97N-WIFI, i3 3.8 GHz) with two Ethernet ports. The idea is to keep all three WAN connections and 2.4 & 5.8G wifi hotspots on the Archer C7 but to do the packet processing (MWAN and perhaps SQM) on the x86. Is it possible? What could be a good use of the two Ethernet ports on the x86 in that case?

Any insight will be greatly appreciated.

Yea. This is how I would do it. Just do not buy an entry level managed switch. Get one or two tiers up. The most basic ones have a number of design flaws/quirks that make them unsuitable for use on the wan side of a network.

Thanks, I have edited my original post to clarify the intent better, but you have already interpreted it correctly. Do you have any suggestions on the managed switch model? I believe a 5-port would suffice (3 WANs plus the x86). I was looking for the cheap TP-Link SG105E, but I suppose its even below entry-level

To clarify (I'm not an expert on this topic): the managed router needs to redirect each WAN traffic directly to the x86 port and from the x86 to the corresponding WAN ports. For that I don't need OpenWrt running on the switch. Is that correct? Thanks again!

Yea this is a good question, what do you consider to be non-entry level managed switch for a reasonable price.

I haven't done a whole lot of fancy routing or VPNing with it, but have been happy with a Zyxel GS-1900 8 port. Pretty cheap, pretty well stocked with managed switch features, or so I am told. Reccomended by someone on here, as a good budget choice.

Have a 940/35M cable connection, going to a tiny x86 box (ZOTAC CI327) and off to, yes, Archer C7 and A7 AP wifi boxes. OpenWrt on everything but the switch. (think you can now even run it on that, tho never seen the need to)

Stay away from this one. I bought one and regretted it (actually just sold it). It has a fatal flaw in this context: it can actually take a dhcp lease from any vlan and can be managed from any vlan as well - it does not have proper management/admin security implementations.

The jet stream series from tp-link (business) is actually pretty good, but I think those start at 8 ports.

besides the 2x onboard LAN, the board has 1x PCIe16. Is that slot already in use?

Why not buy an additional new or used 2x or 4x NIC PCIe card for that slot and have it all in one?

Thanks, Pico! Yes, I realized I could use the PCIe port for an extra Ethernet port (three total) and was looking for alternatives. How are the Realtek chips supported on OpenWrt? I can get an RTL8168H (tp-link TG-3468 V4, the consumer market is flooded with this card) or a generic one based on RTL8111.

For wireless, I believe I can use a newer Wifi 6 hotspot. The idea is to connect WAN1 and WAN2 (load-balanced) to the onbard LANs, the new pcie card to the wifi 6 hotspot, and the onboard Intel 7260 wifi adapter connecting to the 5G AP as WAN3 (failover).

Nice suggestion, i will take a look at that. Now does anyone know of a good budget 2.5gbps ethernet port managed switch

I hear alot of people on the forums recommend sticking with intel if you could find an affordable one. I believe some of the realtek ones might lack in the performance/ reliability department in comparison. However, you may find that openwrt has more working drivers available if that makes sense?

No, I meant PCIe cards with 4 additional NIC ports on the same card.
2 on mainboard + 4 on the same PICe card = 6 (six) in total 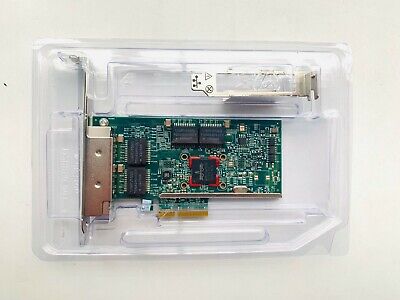 But this is just an example, there are lots of other brands available. Just check shops in your country. Previously owned cards are from servers, but practically are as good as new ones, just cheaper.

Before you go that way, have you considered doing easy things like overclocking Archer?

I have three and they are all O/C to 960MHz and have been that way for couple of years now. Packet processing speed scales well with CPU, so that should net you around 300Mbit.

P.S. Actually, they overclock a bit beyond 1GHz if you don't mind RTC going wrong.

This I have read about, don't know how good one would call it. https://www.servethehome.com/cheapest-2-5gbe-8-port-switch-tp-link-tl-sh1008-review/

These guys (STH) do a lot of reports and reviews of hardware, including 2.5gbe switches and the newer miniPC x86 boxes with 2-4 2.5gbe eth ports... A good site to keep an eye on as new stuff comes out.

Edit: D'oh! Its an unmanaged switch, sorry to get everyone excited with that price! It's late, hadn't read that one for a few months... Check around, they might have one or two by now...

I've had pretty good experience with my Zotac CI327 these past few years, with rare, brief dropouts of the eth interfaces. I get some issues that could be other hardware problems (CMCI storms, nearly always during heavy speed testing) so I don't know if its other issues causing that. It's been so occasional and quickly resolving, that I haven't been that bothered by it on a day to day basis. I've also heard folks saying that perhaps some earlier Realtek chips got them the bad rep, and the newer ones are more robust, or they were bad with the drivers Pfsense were using but not OpenWrt...

what do you consider to be non-entry level managed switch for a reasonable price.

The Netgear GS308T V1 switch might be closer to entry level and is running the Realtek RTL8380M chipset. It has eight 1Gb ports and runs stable OpenWrt 22.03.2 and was recently reported to be free from defects like bringing all ports up in one vlan until the OS loads. I have been running one for over a year and it has been fine. Check it out if you decide not to go with 2.5Gb.

The device page is not up to date as the standard builds are available for it with 22.x.

Techdata: NETGEAR GS108T v3 Usage ~~hideseceditbutton~~ * IMPORTANT : Edit this page only via the LEFT edit button below the dataentry box * After editing, please enter a short summary of your edit: * Which field has been changed? (e.g.

After researching and learning that even the Intel PCIe chips have problems, I finally opted for two Linksys USB3GIG (Realtek 8152). Now I have four 1Gbit Ethernet ports. The USB adapters connect the two 500 Mbit WANs. One onboard NIC goes to an unmanaged 8-port switch, and the other to the good old Archer C7 V5 that has been degraded to an access point, soon replaced by some WIFI 6 AP. I have tested the USB3GIGs, and to my surprise, they consistently peak at 980/990 Mbit or so. And after 72 hs of 24/7 use, so far, they are stable; nothing to worry about. The USB3GIG adapters are cheap, and I can plug one or more, if needed, before running out of onboard USB3 ports. These adapters have some years on the market, and I'd look forward to Linksys launching a 2.5 Gbit USB 3.1 model. 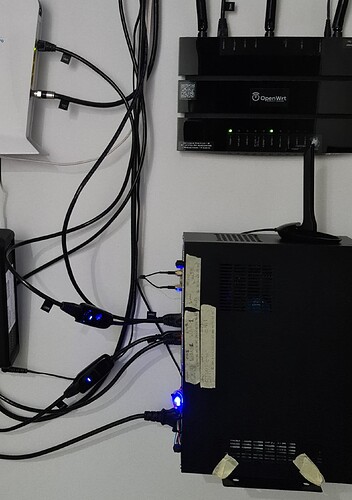 Speed-wise, the change from Archer C7 to this x86 system is night and day. A good WIFI 6 AP will give substantially better wireless, at least on 2.4G. 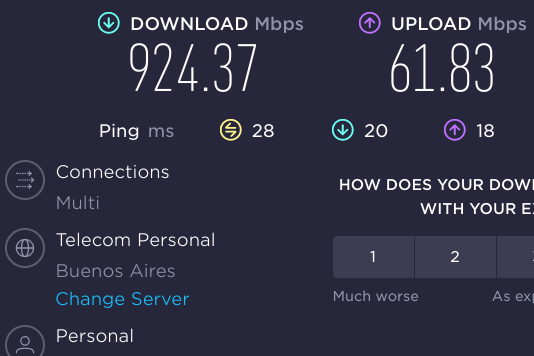 what does the draw on the CPU of the openwrt setup look like when you peak on the download using the USB3GIGS adapters?

Here is a screenshot of "top" while doing a speedtest.

At almost 1 Gbps, I believe it is slightly busy handling connections, perhaps USB overhead (34% sirq). Nevertheless, the system might have space to manage even 2.5 Gbps.

what about when you run htop?

about when you run htop?

I'm curious, what difference will it produce?