Route incoming traffic through VPN-tunnel to a LAN interface

Remote server/VM (Ubuntu) I have:

This is the further issue I cannot seem to resolve:

By this I am certain I need to add a route and a rule on the OpenWRT firewall to get this working. I've tried to add a firewall rule that accepts traffic from interface vpn0 --> interface VLAN50 (192.168.50.0/24). But I'm not quite sure how to route this in OpenWRT. Since these interfaces both are on the same device, I'm not sure how OpenWRT handles this. How do I add a route, and which networks do I need to add a route between, to get this correct and avoid adding loops? Is there anything else maybe?

Now at least both the firewall and OpenVPN server knows where to find the network. And as of what I understand they both reach 10.8.0.2. Which is tun0/vpn0 on my OpenWRT router here at home. Where it seems to be stopping.

Just as a little additional information, on my PFsense side of things: 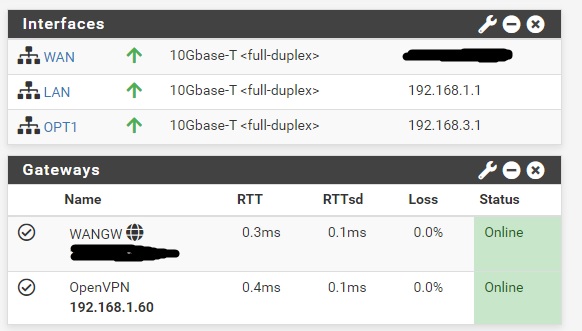 Is the pfsense system on the same physical network as the OpenWrt router, or is that simply showing the remote side of this VPN tunnel?

PFsense is on the remote side of the tunnel.

Remove this... it is already handled by the forwarding rule that allows vpn > lan forwarding.

Let's take a look at the OpenVPN client and server configurations.

psherman, thanks for your time.

This is the OpenVPN client config:
(I haven't pasted server url or keys in this paste-in)

I also have this in my /etc/sysctl.conf to allow routing/forwarding of ipv4:

Remove this... it is already handled by the forwarding rule that allows vpn > lan forwarding.

Will that rule also accept traffic the other way? Since that rule accepts traffic from lan zone to vpn zone?

I haven't solved this yet

Sorry for the delay here.

I don't think this is right, although maybe the proxmox configuration means that this needs to be a bit different.

Usually, I have a line in my OpenVPN server config that pushes the route to the client, and another for the DNS:

Will that rule also accept traffic the other way? Since that rule accepts traffic from lan zone to vpn zone?

@psherman , thanks for helping here and your time consumtion - I have read your reply, and will come back to you very soon. Sorry for my very late reply. Feel that I am close to a solution.

Did you have any luck with this? I am in a similar predicament. Looking to port forward through my cloud-hosted PFSense router to a local address behind my OpenWrt router via a VPN client connection.

I am having a bit more look into this again.

It is possible I am misreading you at some point. But just to clarify; I have no issues with traffic being initiated from inside of my (home/OpenWRT) LAN and through the tunnell. I reach my external LAN (behind the OpenVPN server and PFsense) perfectly fine. With every services I need. Not quite sure if my OpenVPN server is running the traffic through NAT or routes, though. Maybe that has anything to do with this whole mix as well.
--->
EDITED AFTER I WROTE THE LAST WORD UNDERNEATH: Yeah. Why would I need static ROUTES defined on the OpenVPN server if traffic isn't being routed anyway? Then it has nothing to say, except of what is inside the openvpn config file? Or am I wrong here?

Usually, I have a line in my OpenVPN server config that pushes the route to the client, and another for the DNS:

When you are saying that it pushes it to the clients: You're referring to the VPN clients right? Because the traffic FROM the client/OpenWRT side of things, are just fine. As mentioned.

And also, am I reading you right and you're applying that the rule that allows traffic from my LAN/OpenWRT and to the tunneling interface also allows traffic initiated from the external/VPN-network? I sure hope not! That would've allowed anything back from your every WAN and in to the local network, if working that way.

You have to have one rule per direction, if you want to allow initiated traffic from both sides. I strongly assume.

I am getting return-packets from whatever PID initiates traffic from my (Home) LAN and --> through the VPN-server --> The Proxmox server/PFsense LAN... That works.

The only thing that doesn't, is to reach my (home/OpenWRT) LAN from the OpenVPN-server - through the tunnel - through the OpenWRT fw - to the whatever VLAN I define.

I did some research again the other day, and I found something interesting. Maybe you guys can have a look and see if this is something you have experience with: https://backreference.org/2009/11/15/openvpn-and-iroute/

This has examples in it, and explains a lot about what routes that shall be used. And that iroute line. And why it matters. The thing is just that this postings from 2009. Much have probably changed in OpenVPN software since then. And it's a little unwise to follow that old articles when it comes to network security in general

@stephendt ; I haven't tried this yet. But maybe I'll try it soon - In combination with a static route or two.

I have understood this much:

Which means, that it's the jump between 10.8.0.1 OpenVPN-server and OpenWRTs tun0 with 10.8.0.x.
In theory I should be able to ping the tun0 of my OpenWRT making sure I'm pinging from the right interface, on the OpenVPN-server. If not, there should be a fundamental issue. For instance some accept-rule missing on my OpenWRT. Or some obvious config blocking all traffic that way around. Maybe I'm scoping within the size of the issue. I know I remembered to enable kernel IP forwarding. But still I suspect that this has something to do with the OpenVPN NAT. I have no running software firewall on that VM.

My thoughts next will be to try to follow the advice of the OpenVPN server config change as in the link above. Next, find the correct static routes to define on the OpenVPN server kernel. I think that pinging the mentioned IP again, but first defining which source interface/IP-address for the ping I might get an idea of what route is missing. At least as the first step further.

Because so far I'm actually not sure from which of the interfaces I tried to ping from.
Maybe it tries both, as default ..? I don't know.

Give me all your thoughts and feedback here. I appreciate it. And don't worry - I will take it all in the best of ways.

Thanks for the update. For what it's worth, I did end up being able to work around this issue - but it ended in the form of me setting up a completely separate OpenWrt VM (DHCP disabled, desired clients statically assigned an IP / Gateway), setting up a full WireGuard tunnel to my VPS, and then doing port forwarding from there.

It's messy but it does work. My next step is playing around with VLANs to achieve the same thing on my primary router, but I have something working for now so I can relax a bit.

I have reached the conclusion to give this up - And rather try to use my PFSense firewall as an OpenVPN server instead of running a dedicated Linux VM with a server running on it.

It might be a more correct configured server without too much trouble - It has a good GUI and a good rep. And if I'm lucky, two-way traffic might be working from day one without any special needs.

I wouldn't consider this thread as 'solved', but I don't feel like pursuing a solution any further. So in some what way I need to "end" it. Do I have to mark it as 'solved' ?