Revert from open wrt with PUTTY to TP-LINK 841ND [Closed]

I hope I don't double post, because I can't find the previous topic anywhere.

I installed open wrt, but it has no LUCI. I tried installing LUCI with PUTTY and WinSCP, but on PUTTY the router refuses the connection, on WinSCP it refuses it after entering name: root and password: none. Can anyone help me set up this and revert back?

Unfortunately I can not connect with WINSCP, it seems to connect with FTP instead of SFTP, but when I enter user "root" and password "none" it refuses the connection.

To access router file system using WinSCP, you should choose the protocol as SCP.

Thanks for the help so far guys, but I will need a little more.
0. Video how to revert. 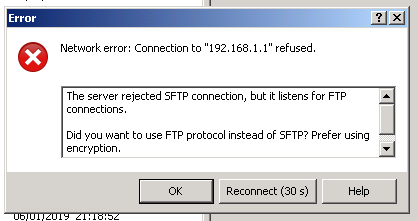 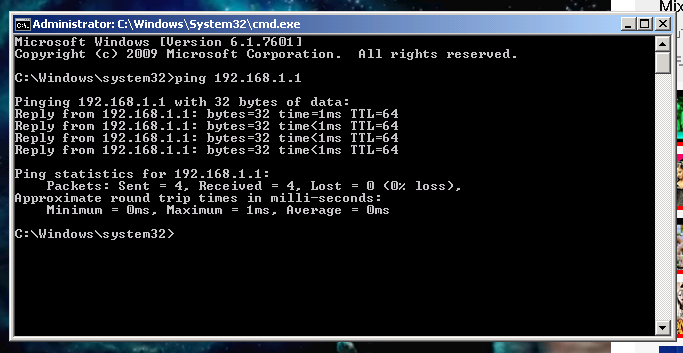 Please follow the instructions that tmomas linked in the second post if you are running a current version of OpenWrt downloaded from downloads.openwrt.org

Since OpenWrt doesn't install an FTP server by default, are you certain that it is running OpenWrt?

For that matter, I don't think that OpenWrt installs an SFTP server by default either. A quick check on a device on my bench

(Note that any OpenWrt derivative that was not downloaded directly from downloads.openwrt.org may behave completely differently than OpenWrt itself.)

I think the passing from DD-WRT to Open WRT causes problems. If its DD-WRT what do you recommend?

I sitll need to connect with "WinSCP" and "Putty", i don't want to create a "TTL" circuit at the moment or as tou call it "Serial".

15.05 may or may not support what you are trying to accomplish. It is obsolete and unsupported.

I would suggest trying the TFTP method that was linked to you by tmomas.

Option 1 from "tmmomas'" post, when I try to download the file from the google drive link for version 9:

Option 2:
I already said I don't want to create a level shifter which will require a com port also.
Option 3:
Does not work because I can not connect with "WinSCP" to pu the file in the "tmp" directory.

I'd suggest installing a Linux virtual machine so you have the real basic CLI versions of SSH etc.

For serial you buy a little converter that plugs into any PC's USB port and has wires to plug into the router. No need to build anything.

Can you please give me a link for TP-LINK WR841ND v9 Open Wrt flash image with Luci and current?

Being a "4/32" device, it doesn't have enough flash for current firmware with LuCI. You should consider upgrading soon, as it is unlikely to support secure firmware of any sort in the very near future. TP-Link OEM firmware is not considered secure by many, especially for older units that have not been updated in many years. The same goes for third-party options that are running on kernels older than a year or so, and using older application software.

You might want to consider one of the "community builds" or build an image to meet your needs with the image builder, build system, or other tools that third-parties might make available.

You will need to be careful with versions, as TP-Link has released many different units under the "841" name.

Thank you very much for the help! It really helped me.

I will leave Open WRT for now.

I have 1 last question off topic. Is there any way to use Open WRT for nodeMCU development board with ESP8266. I have seen it work with programming by the Arduino IDE, but wonder if there is a way to put an interface on it.

nodeMCU development board with ESP8266

No, it is limited to things like "straight C", the OEM's RTOS, openRTOS (very close to FreeRTOS), nodeMCU, or the like. It has insufficient resources to run Linux.

Thank you very much! Bye and have a nice day!