The Belkin RT3200/Linksys E8450 is reported to shape SQM at anywhere from ~500 Mbps (CAKE) to ~850 Mbps (fq_codel+simple qos). This would be a good option as a reasonably priced out of the box router only solution for the OP, with usable (medium range) WiFi5 wave2 ac wireless as a bonus. OpenWrt WiFi6 ax wireless support looks to still be a work in progress, but the developers will get there soon I expect.

Faster and smaller with no WiFi....a NanoPi R4S (with its metal case) would be a good next step up option if the RT3200 CPU is too slow. Add an inexpensive managed switch if you need more than the two ports on the NanoPi R4S and you are good to go.

whats the speed of pi4 with sqm?

The Rockchip RK3399 6 core CPU (2 @ 2 GHz) in the NanoPi R4S is substantially faster than the MT7622 in the Belkin RT3200. With current chip shortages, it's going to cost a little more than the Belkin too, but the Gigabit Ethernet ports will limit you before the rest of the hardware.

I forgot to mention to the OP - get the 4GB version for best OpenWrt compatibility. There's a patch to support the 1GB NanoPi R4S, so in time....but if you want current plug and play, get the 4GB model.

In all honesty, a game that is apparently not able to arbitrate roughly fair between players in a very tight RTT bracket (12 versus 19 ms) does not seem worth investing time on. Yes, approaches to netcode can differ, but all need to make sue a level playing field exists, either by only allowing player with sufficiently equal RTTs to play in the same world, or by using the known mitigation techniques... But then I also understand that there are more considerations when liking a game than the quality of the netcode.
It certainly is possible that CS:GO is that fickle, but I have my doubts...

No, I mean raspberry pi 4 I would still recommend the 4GB NanoPi R4S to the OP over a RPI4, because the NanoPi R4S already comes with a second Gig Ethernet port and a really nice metal case/heat sink. No USB dongle required. Easy. No issues. Done.

That's not to say the RPI4 cannot be made into a workable Gig SQM solution with the right USB dongle. I'm just trying to keep it simple.

only saw mr van tech's video yesterday... was really impressed with the layout/form factor and openvpn performance of the r4s

it's definitely a better board from a purely hardware perspective

but... if you dont need openvpn or really neat small form factor then they come out about equal imho... if not the rpi4 slightly on top due to being available(yes... yes... shortage etc.) everywhere, lower thermals? and better code support in general

here is one up and comer in the works, getting extremely close to competing with larger solutions (i.e. mochabin , turris2022 etc.) 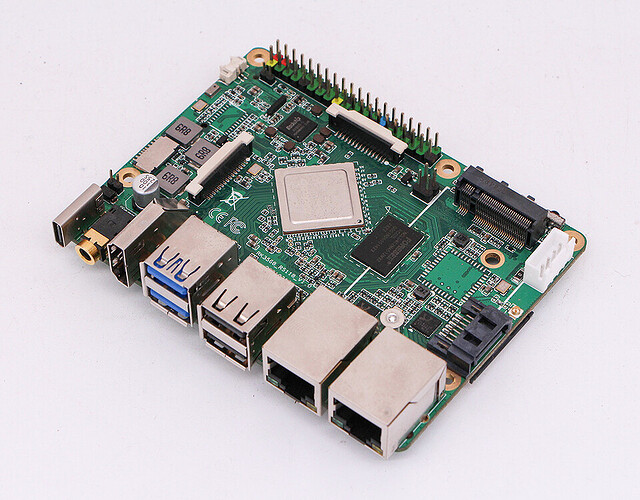 If you are running OpenWrt on bare metal the better code support on RasPi is basically gone, and 4 is notoriously known for running hot and need cooling solution to not throttle.

Radxa is also working on E23 and E25, which are dual NIC board with single/dual 2.5GbE.

possible that CS:GO is that fickle, but I have my doubts..

Indeed, I doubt very much CS:GO is the most popular esport in the world while having netcode that can't fairly adjudicate delays that are 4% of an eyeblink

need cooling solution to not throttle.

maybe if you're watching video on it but 100% A non issue in routing for current board revisions.

Well yeah if you only use it for routing. But that's a waste of hardware IMO since you can run Proxmox or docker on it.

Which in general is a tempting/attractive proposition, given that routers are on 24/7. But you are putting all of your eggs in one basket, security wise. What will you do if you long running (and npt properly snapshotted) container needs another day of run time, but the router part wants a fix for a zero-day exploit that was just revealed immediately? Yes, this is a bit contrived, but it shows the opposing forces at work IMHO.

Problem with running OpenWRT containerized is you lose flow offloading at this time -- which may not be an issue when using SQM. But also, I find in practice that while my router has plenty of headroom to run other services besides routing, I prefer not to do it as it introduces runtime risks and maintenance issues by linking concerns that ought to be unrelated, e.g. it can create logistical problems because of gratuitous dependencies of unrelated services on the same hardware. (Edit: basically more or less what @moeller0 said.)

I do however run LXC containers in OpenWRT (rootfs's under LVM2 storage), for pure network services that are already completely dependent on the router being functional (and therefore won't be gratuitously affected by router maintenance), such as AdGuard Home and some MQTT related services, which I don't want to get wiped and have to restore when I update OpenWRT.

+1 RT3200 - I have three. In another OpenWrt thread it was concluded it can handle 1Gbit SQM.

I had exactly this conundrum a few months back when upgrading from VDSL to FTTP with 900/110 down/up speeds. I read a lot of threads in this forum which helped and confused in almost equal measure.

I've always been a fan of Linksys WRT series routers but I decided to go another, recycling route by buying a refurbished Dell OptiPlex 3020 SFF with an i5 and a couple of HP NC110T Gigabit Ethernet cards - I'm not a fan of Realtek cards having had problems in the past and these HP cards are Intel based and designed for servers so are pretty much bulletproof. Total cost was £100/$120.

The i5 is overkill so you could get an i3 for a small saving. I've never seen the load go above 3% even with 2 heavy gamers in the house. I use a mesh system for wifi to the lack of this isn't a problem, but you could replace one of the HPs ethernets with a wifi card and use the Realtek if you needed to,

OpenWrt runs like a dream, and I'll never need to buy another router

Here are solutions similar to the one you recommend (refurbished PC) and cost about the same:

You just have to buy any of these genuine and used NICs from eBay:

Another +1 for the RPi 4 here. Put it in a nice passive case (Argon Neo, Flirc, any of the aluminum "armor cases" to name just a few) and you'll never have an issue with thermals in any routing application I'm aware of. I have the onboard gigabit port connected to my LAN and am using a TP-Link UE300 for WAN with absolutely rock-solid stability and full gigabit throughput. Wireless connectivity is provided via a TP-Link RRE603X which I purchased for $60 and have located centrally in the home with great coverage.

With that said, I do have a NanoPi R4S on its way though with the state of the world it might be another month or two before it reaches my doorstep. If they only had better US-based distribution around that same $80-$90 price point I think that would instantly become the no-brainer choice for a lot of setups.

@Sentenzo is right, maybe his delivery in truth ruffles some fans of the pi4. PI and A72 derivatives are just not cost efficient. For me, I ripped out some PI4 because they are simply too slow and replace them with x86. @anon50098793 already documented the limitations of the core/ethernet/networking bindings of the PI4 that increase latency when bandwidth increases past 600mb. Translated into real world, @Sentenzo documented the 12ms --> 19 ms (almost 100% increase in latency) jump in his competitive games. STEAM/valve which owns CS GO is not some small company with inexperienced network engineers.

Raleigh, NC is already active with 2.5 gigabit and 5 gigabit options on ATT Fiber as of November 2021. Pretty soon you'll see it rollout nationwide in 2022. To put it in context for worldwide people, ATT Fiber has a pretty massive footprint in USA -- either #1 or #2 ONT fiber ISP.

STEAM/valve which owns CS GO is not some small company with inexperienced network engineers.

Yes, but that will not retroactively fix a netcode design intolerant to unequal static latencies and more importantly unequal jitter... I do not want to diss CS:GO here, but it clearly is a game that often is cited when network issues are brought up by gamers (could well be, that it is just played by more players than other FPS games, which would explain the apparent incidence rate).

Sure, but it still is one of the cheapest way to get a router that (once competently configured and not overburdened with additional chores) will allow you relative low latency under load routing on a budget. Sure there are other options available, all also in the ARM camp though.

If we are in the "bragging rights department" ISPs in Switzerland and France deploy ~10Gbps XGS-PON, while Init7 a small swiss ISP even offers 25Gbps for consumers. But that is pretty much irrlevant for the billions of users still on <= 1 Gbps links, no?

I was curious so I went ahead and did an Ookla speedtest and Waveform bufferbloat tests both with SQM off and with SQM configured. Router is a 2GB Pi 4 with TP-Link UE300 USB adapter connected to WAN. WAN connection is CenturyLink fiber, advertised as symmetric gigabit service.

Use Speedtest on all your devices with our free desktop and mobile apps.

Those seem like respectable results to me? What am I missing in this conversation?