Can anyone recommend a mini pci-e wifi card that has 5GHz/AC and is also able to operate as an AP on 5GHz? From what I've seen so far, the smart money is on Atheros chipsets?

Maybe give a card with a Mediatek MT7612 chipset a try? For example from asiarf or unielec.
The chipset is well supportet by openwrt.

But also note, that i myself have problems, getting such a card running on a mikrotik rbm33g. On other devices, the card works.

Thanks, it'll be on an x86/64 system, so it shouldn't have too much trouble. Unfortunately, I only seem to be able to find the USB version in the UK. I'll keep looking, gotta be an export available somewhere.

They seem extremely difficult to find. When I do find them, they don't ship to the UK. Like this one

Very frustrating, other good AP capable cards seem to all have the same issue. It's almost like it's being done deliberately.

If I can't find anything worthwhile here, if there's anyone willing to order proxy to my country I'm up for it.

I think that's for manufacturers to bulk purchase, I sure ain't paying 90 quid for one.

I used two older variants of these cards for years. They're bulletproof and they just work.

Look at some of the other models on their site. The two I linked are their top of the range ones. They may have cheaper ones.

Available on ebay for £30

That's a better option, I'll have to stick a heat sink on it, but it's sure better than £90. Unfortunately the seller wants another £30 for shipping. I think I'll just bite the bullet and continue to use the ISP CPE as a wifi access point. It just feels greasy to have to use three devices to do one job. Getting a good 5GHz card would allow me to remove the Sky Hub from the mix and handle Wifi from the X86 device. 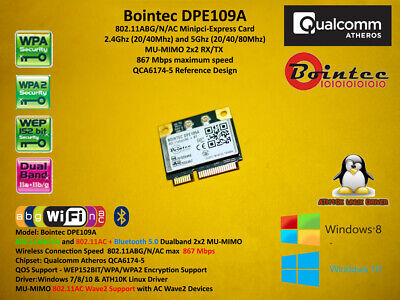 Need to check compat though.

Compex WLE600VX miniPCI Express 802.11 a/b/g/n/ac The Compex WLE600NX miniPCI AC Express wireless card has been brought in for use with PcEngines APU boards to give wireless connectivity. This is for the PCIE...

They also have the 900 for £38 but are awaiting restock

Incidentally, I never needed to use a heatsink on any of my Compex cards. Why do you think you'll need a heatsink?

Every time I've ever used a consumer Wifi card in HostAPD it works for a short while, then overheats and becomes unstable. These particular cards seem to be made for being hosts though, so that probably doesn't apply, and I did notice many of them already are fitted with heat sinks as supplied. I'd just rather play it safe than cook the chip on a difficult to obtain card.

Compex cards are not consumer cards. They're meant for access points

You won't go wrong with a Compex card

For sure. Thanks for pointing me in the right direction. Appreciated greatly.

Hey, you're welcome. You won't be disappointed with them. They just work in Openwrt and they're bulletproof.

You're gonna need a bunch of U.FL to SMA pigtails and 4 antenna for that card....

I have dozens of them already, and every single antenna type imaginable. My ideal device would be an ITX system with a Vigor 132F DSL card and this Compex Wifi. And to be fair, the cost of those bits would be on par or even cheaper than a lot of high end DSL routers but would be orders of magnitude more versatile and powerful.