I am moving my home network to be a mesh / wired backhaul mesh using open WRT
so the plan is:

Archer C7 will be the main dump access point (currently the main router)
and I need to get a router , so I am interested in Xiaomi AX6s , but for about same budget I can get a raspberry pi 4,

I must say that the main router will not be used as a WIFI device , only Lan and wan interfaces will be used.

The Pi, any day of week.

I have a pi 3B+ collecting dust , will it also overtake the AX6s ?

I actually used the AX6S for a while as a main router, and now I've replaced it with a Nano PI R4S. The AX6S has support to hardware NAT and can also achieve Gigabit WAN speeds without SQM.

Below is a CPU (coremark) benchmark I did just for reference (I do not own a Pi4) I recently posted in the NanoPi R4S topic - notice its is a single-core benchmark:

Below is also a WAN speed test I did with AX6S that I had posted some time ago in this router's topic: 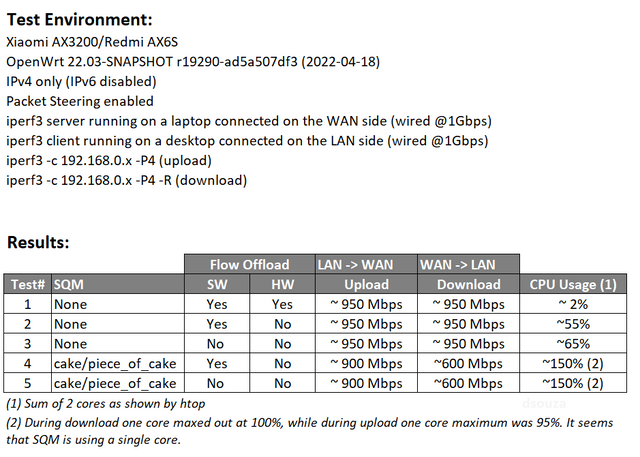 on paper, and theoretically ,
how does these thin pc compare to nano pi rs4 , if at all ?

Depends on what parameters you compare...

But the thin pc probably have a weaker CPU.

I'd buy a used CR25wiNG or CR25ing on ebay instead, running an Atom 3k.
The w model have built in wifi, but I don't know of what kind, and if it'll be supported by Openwrt.
They're cheaper whan the thin clients anyway.

Thanks
The thing is , can I get a better x86 (much capable) solution to be my main router for about the same price as the NanoPi R4S , I saw a lot of quad core with 8GB or 4GB for 100$
there are a lot of threads about the x86 devices , yet it is hard to understand the performance of these devices and compare to other solutions like arm based SOC with dual NICs
is there a thread list x86 devices performance ?

Performance in what way?

Most will be able to route a gigabit, if you need sqm, you can't buy the cheapest one though, the CPU will become a bottle neck.

Power draw will vary a lot between the two, the r4s will barely consume any power.

That isn't necessarily true. Modern x86_64 systems with optimized hardware for the job (both Atom and Core architecture) can get along with rather modest (mains-) power draw, 7-15 watts during normal operations is achievable with the right hardware - ARM based wifi routers (mvebu, ipq806x, etc.) easily exceed those figures. Obviously your old gaming rig/ rack server/ desktop tends to chug a lot more juice out of the wall - and the NanoPi r4s seems to be really very good in this domain.

Same price after adding a $30-$40 network card to an x86 thin client seems unlikely, but bargains do show up all the time.

There are certainly more capable x86 solutions than a NanoPi R4S, but I think it would be hard to find one that idles at 2W, peaks well below 10W, routes and shapes Gigabit and takes up so little space in the telecom cabinet or equipment shelf. VPN speed might be better on comparable x86 options, or not. OpenWrt did recently add R4S hardware encryption support, but I've seen no benchmarks

It all comes down to your preferences and constraints in the end.

If your router location needs to have switched ports and can't be in the same place as your AP all-in-one (that does have switched ports), then you'd have to factor in the cost of a manged switch to hang off a NanoPi R4S. An x86 option with multiple ports might save you buying a managed switch?