Raspberry Pi 3b as personal "network shield" for unsafe networks

Due to my job I am forced to work in student homes networks which are known to be quite hostile environments due to the mass of users who do not care. Due to the fact that my old routers are pretty dusted (and should go in a museum by now) I looked around and found a cheap and especially compact device: A Raspberry Pi

So I made up my mind and did an image having the following ideas in the back of my head:

As we have 2 network interfaces, we can easily route. USB allows us to plug a smartphone in case of having no network, maybe a backup uplink in case. If network comes via ethernet, we have a personal hotspot. If we get WLAN, we have ethernet.

There are also various VPN solutions available to get us 'home' safely as needed.

Speaking of USB earlier, it wouldn't be bad to have aria2 as a downloader for doing big downloads over night (ISO files).

Is there anything I have missed for that box?

Past the strangled Ethernet and marginal support of the wireless on a Raspberry Pi?

You might want to look at perhaps more suitable hardware for an all-in-one router. As one example, the GL.iNet units do that, turn-key, starting at under US$20 for single band, 100BASE-T. Many suitable all-in-one routers in the US$50-70 range are dual-band, GigE switch and would likely outperform a Raspberry Pi at a comparable price and, in some cases, size (GL.iNet AR750S, for example).

I am aware of the drawbacks, but it's easy to get replacement units here in local stores and it's easy to work with multiple SD-Cards. On the other hand, it's basically for being online, not for the biggest downloads.

it's basically for being online, not for the biggest downloads.

That might be true right now, but for how long is basic connectivity for emails/text good enough? Suggestion is to get a device that’ll be useful for a while.

We are talking about hotel networks and stuff. That's mostly not more than a week or two.

The RPi is just just a uniquely bad, horrible, design for a networking device, with its very limited I/O capabilities. Just about any cheap (and/ or old/ used) router with sufficient hardware specifications for running OpenWrt will do a better job here - and be cheaper at the same time.

Unless the R Pi will be used for another purpose, and have it doing to routing thing during travel, so it's only a matter of an SD card.

For ~US$18, at roughly 2"x2" (6x6 cm), 1 oz. (36 g) you could buy and have delivered a https://openwrt.org/toh/gl.inet/gl.inet_gl-ar300m-lite which already has all the travel-router features installed on top of a recent version of OpenWrt, and runs off a microUSB cable at something around 250 mA (<2 W). Its small enough that I've lost it in my briefcase, or forgotten it was in there more than once.

Its small enough that I've lost it in my briefcase...

Is that a good thing or a bad thing?

Don't buy it from Germany and get it shipped to the US though. The image is real by the way. I know it's this is a serious forum, but this had to be shared!

This is the non-Lite version though. Maybe that's why shipping is expensive. 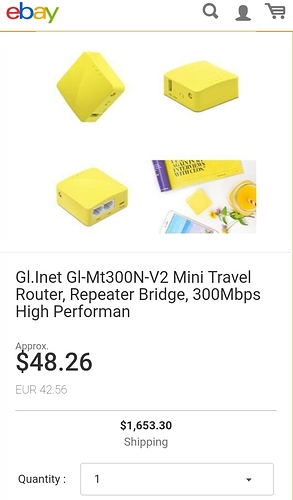 As it was a choice based on "hardware sitting on a shelf here", "being able to get a replacement board in less than 2 hours" and time - I am about to board the train - I had to grab what I have here. Due to the weekend I couldn't get something else and a casio calculator clearly lacks interfaces.

I agree that the raspberry is a horrible broadcom device but we are getting off topic as I was asking about things I missed, not how horrible the device is.

It's not so much a matter of a horrible vendor (although there are problems with the way videocore and its firnware is needed to initialize the ARM core), but more that all I/O (in particular networking) hangs of a single USB port (via an onboard hub) on the SOC, which limits throughput massively. It doesn't really help that the USB network chipset chosen for the RPi 3b can't cope well with high network load, resulting in bursty/ choppy results.

Yes, you may have had it at hand - yes, it may do the job for limited needs (especially if a slow uplink acts a natural rate limiter for the USB network chip), but it's a very sub-par choice for a router. Even cheap and low-end routers can provide a better service for routing tasks, not so much for CPU intensive tasks though.

Even cheap and low-end routers can provide a better service for routing tasks, not so much for CPU intensive tasks though.

As you insist on a different hardware device, show me a way of getting one here in the next 15 minutes, as that's all of the time I have to do the setup and testing. Budget: 25€

I guess it's time to do a small report about that 'so crappy device'.

First of all, the small AP functionality worked better than expected and I am online since Monday without any problems on that side. Connection is stable and oh surprise, the 10 Mbits coming from the internet are going through flawlessly. Some QoS tweaks made living easy.

I guess the best thing about t is that it could be a media server at home, then magically be transformed to the travel router with changing the SD card!

Nobody said it wouldn’t work, just that there was more appropriate hardware for a general solution to the task.

@jeff: The way you wrote about it - strangled ethernet and marginal wireless support - sounded like its performance wouldn't even be sufficient for basic tasks like email.

Sitting here, it's a fine toy doing its job powering 3 hosts. Found 4 shops here in walking range offering raspi boards but no other small wireless devices except from some big netgear routers and other oversized boxes not fitting into my luggage.