Raspberry Pi 3 B has no internet wan connection

I am new to openwrt, have a little networking knowledge and I have installed openwrt on raspberry pi 3b. Searched a bit and couldnt find solution.

I have manually turned on wifi so I can connect to it to use the web interface. I have noticed that there is no internet connection and in the Interfaces, there is only 1 Lan br-lan which is 192.168.1.1. no wan available.

Ran ifconfig on pi console, no public ip on eth0.

Please let me know the direction i should be heading.
Thanks!

Is the wifi device active?
My Pi4 says:

I think it is because the hardware is not active.
I think it has to do with the country code.
You might need to run Raspian and set up wifi there first.

the first thing you should realize is that the onboard Wi-Fi is weak sauce and you will not enjoy using it as your main internet access.

a huge part of this is just a physical limitation of a minimal antenna and therefore not fixable through any amount of software.

then if you haven't locked yourself out you will need to change the WAN interface to use the ethernet as its physical interface.

at that point it should be set up the way that you were asking.

wifi works, I can connect to it and bring up the web interface by visiting 192.168.1.1, I use the Wifi just to configure.

I just want to try this thing out.

Problem is in the Luci, when I navigate to Network -> Interfaces, There is only 1 LAN br-lan with static ip 192.168.1.1. I have no idea how to set up the wan interface. It seemed other devices with openwrt had at least 2 interfaces (1 Lan 1 Wan)

The raspberry pi's ethernet port directly connects to the ip passthrough from the modem.

I want the pi act like a router thats why I flashed openwrt.

Do you have any Network/Firewall/NAT Rules?
I have a Pi4 with no wireless and I had to add one. 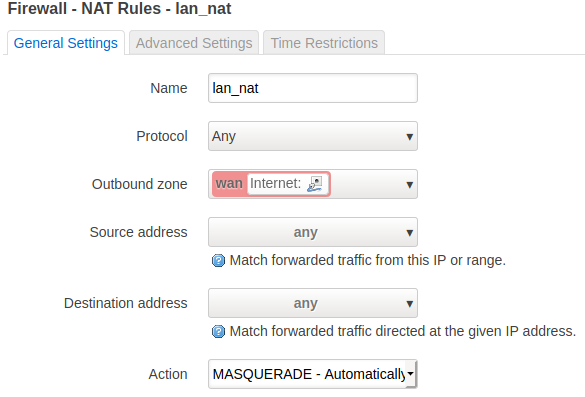 Since I just installed openwrt, I only have 2 preset firewall zones.

It does not have any NAT rules.

In Wireless, the configured ap has zone lan configured.

BTW, I have manually added a new interface called wan with dhcp client option, and set it to zone wan.
It does not have an IP but it receives tons of data.

@bjlockie @dlakelan guys thanks. I found out the reason why.

given that I connected the isp ip passthrough cable to the ethernet port of the raspberry pi eth0, and by default upon the installation of openwrt, the LAN br-lan actually uses eth0 as in bridge mode so the name is called br-xyz.

and then i created wan interface to use eth0 (makes sense)

now eth0 is being used in lan and wan, and I want wan to use it.

so I did the following:

It worked. although lan still show up as green but the settings for physical is eth1.1.