I stumbled upon an awkward situation that I've never encountered in more than a decade using computer. That is, a random connection lost from a secondary router to the primary router, both inside my home. 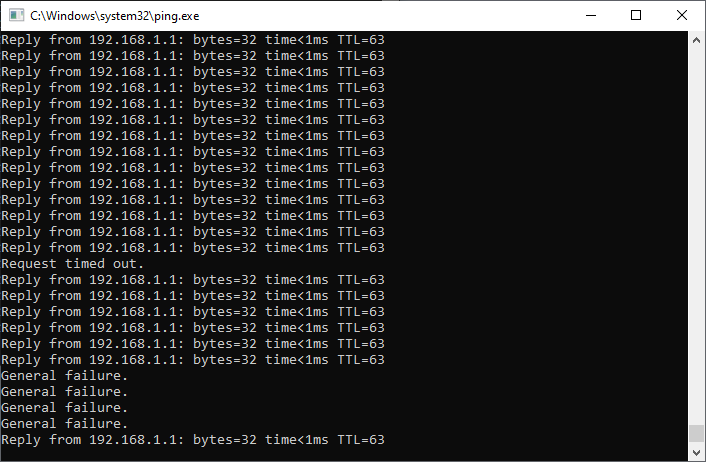 The random drops are annoying, even when surfing the web. Online gaming is out of the question. Everything works normally if I connect my PC directly to the main router using the 30m cable mention above. The presence of the OpenWrt router is just for testing purpose -- I want to play around with it before using it as the main router.

My OpenWrt router is a Newifi D2 which is pretty powerful, while the concurrent home users are 5-7 at worst. They all connect directly to the main router, except my PC which is behind this secondary one. I know this problem is hard to diagnose. But what could be the cause of it? Can you guys suggest some common possibilities?

I'd check the syslogs and kernel logs from the router's side.

Have you properly configured the routing (as dumb AP, only LAN ports in use, WAN unused), as you seem to have the same subnet on the main router and in the secondary OpenWrt router? And have the gateway, DNS etc. defined right.

So, first guess is routing problem. But that could be wrong guess if you have a dumb-AP config without routing.

EDIT:
you might describe your routing topology a bit...

Other observation is that your ping "from PC to ISP router" does not actually tell clearly on which cable the connection breaks: between PC and OpenWrt, or between OpenWrt and ISP router.

You should ping from PC both the OpenWrt router and and ISP router (and possibly from OpenWrt SSH console ping the ISP router).

The broken cable caused the Ethernet interface on my PC change states from Connected to Disconnected and Identifying... quite often. That's when the packet loss happens. I never think of such situation, and always assume that once connected, it will work.