I have a network configured into two zones zone 1) the private wifi and LAN then zone 2) the guest wifi.
I would like to expose a printer from zone 1 to computers on zone 2.
Firstly I confirmed that printer auto discovery works from private LAN and wifi the printer is 192.168.1.247.
By design the printer could not be auto discovered when connected to the Guest Wifi.

To expose the printer I've followed the instructions to get mDNS working between two zones from the following page.
https://blog.christophersmart.com/2020/03/30/resolving-mdns-across-vlans-with-avahi-on-openwrt/

After this I was able to confirm that I could perform nslookup on a windows machine from the guest wifi to resolve the printers IP address but still unable to find the printer.
I then added ICMP and reverse communication paths as mentioned in the following forum post.

Not needed, delete it. Do you have a static route for 192.168.1.0/24 on the fritz? I think you have asymetric routing here. Packet from work_1 network goes to OpenWrt then directly to printer. Printer however responds back via its gateway, the fritz, which should forward it to OpenWrt. But it may as well drop the packet as invalid.

After this I was able to PING the printer via it's name.
However I am still unable to discover the printer automatically from the guest wifi zone.

Any tips or things I can try would be appreciated.

Here is the contents of /etc/avahi/avahi-daemon.conf

I've attached a screenshout of my traffic rules which seem to be inadequite for the discovery of the printer by computers and phones on the guest wifi. 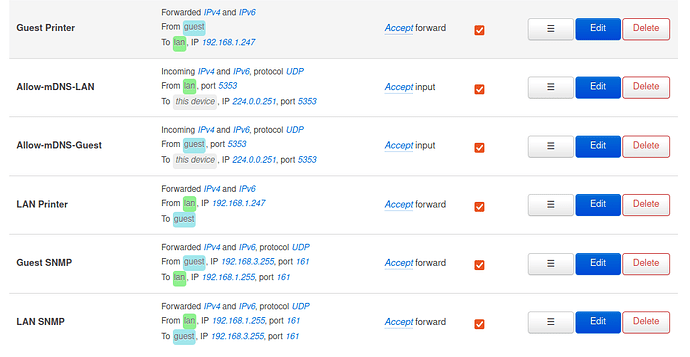 I expect I've made some mistakes and would be keen to try and suggestions people have.
Thank you for your time.

Also I was able to find another page where they tried something similar and were unable to get it working.
https://atomstar.tweakblogs.net/blog/18058/tunnel-apple-airplay-bonjour-across-zones-in-openwrt-firewall