Hello
I'm trying to setup most high prority to my PC and low to other devices conected to my router.
After configuring all QoS and DHCP and reboting roter i running okla speedtest. But it seems to not working (both devices have same bandwidth speeds), anyone can tell me why? 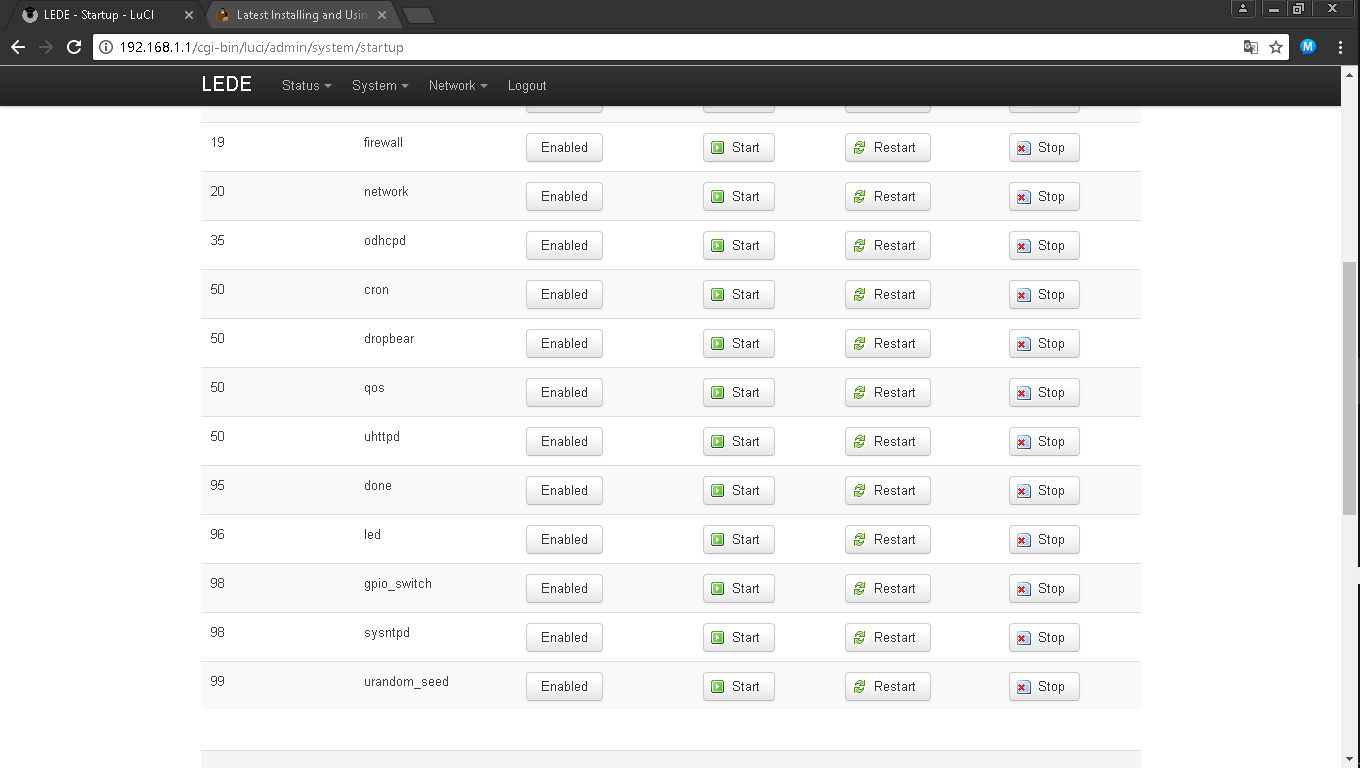 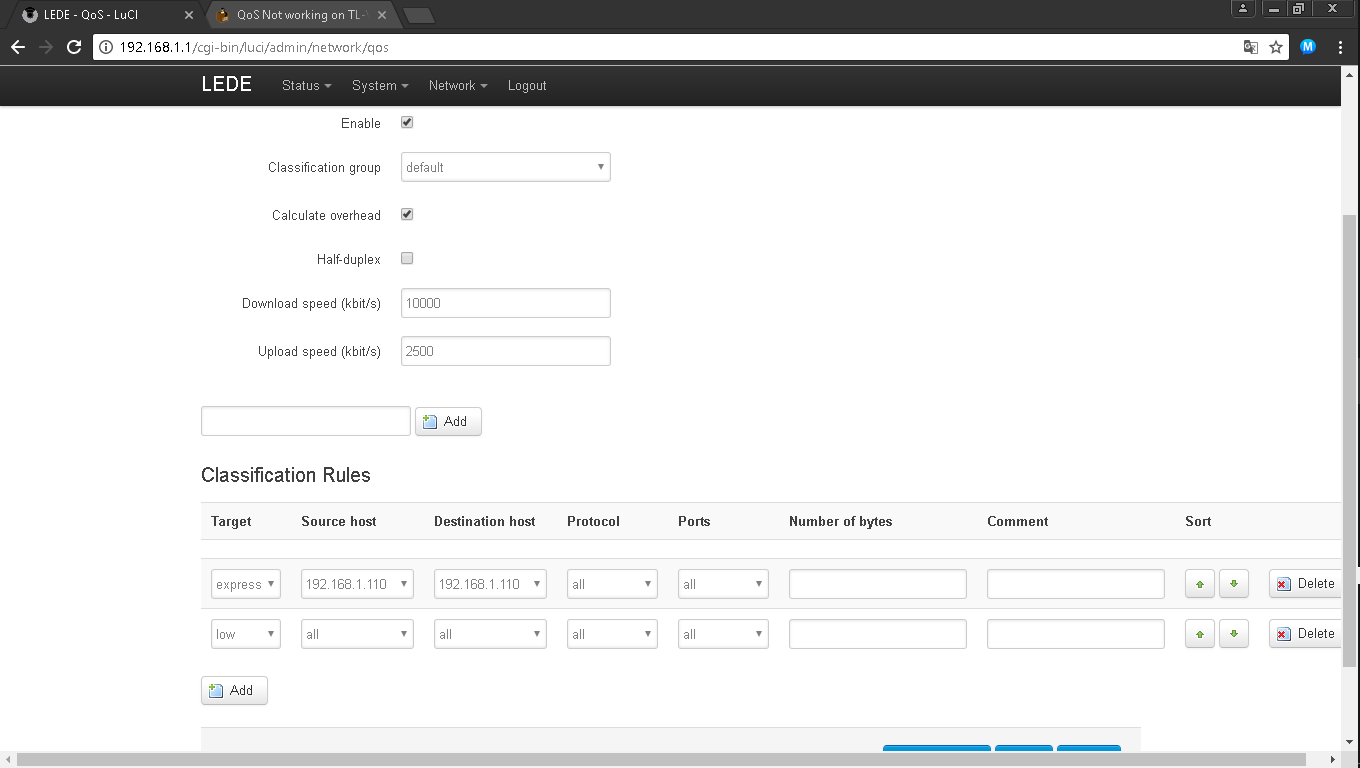 Hmm, the QoS is about prioritize network traffic, giving major priority to certain kind of traffic, hosts, etc than other.

This will help you if you want to give priority to Skype, SSH or your PC when the network is being used by multiples devices, you will not noticed much if the network is idle.

I believe what you want is bandwidth control and that is a very different thing, you probably will need to install additional software to achieve it.

run from the router's command line interface (use ssh to login). My hunch is that the express tier will not get all bandwidth, so just comparing bandwidth is insufficient tp test whether prioretisation works as intended. That said, many users are quite satisfied with the per-internal-host & per-flow fairness that can be achieved using sqm-scripts with the cake qdisc instead of fully manual configuration of priorities as you seem to attempt here. See:
https://lede-project.org/docs/howto/sqm
for detailed installation and configuration options, Alse see:
https://forum.openwrt.org/t/sqm-qos-recommended-settings-for-the-dslreports-speedtest-bufferbloat-testing/2803
for recommendations how to test a cake installation...

@moeller0 Currently i revert my router to Stock software.

Please tell me how to divide my bandwidth like in Gargoyle

That is simple, just use gargoyle! To my knowledge there is no comparable package inside lede/openwrt available, you could basically use tc and iptables by hand to reach your goal (after all that are the tools gargoyle uses under the hood), but if you could do that without help you had not posted here.

Is one small problem ;D Gargoyle not released yet for TL-WR1043ND V4.

Since I am involved a bit in the sqm effort, have you tried that? If so, what exactly did not work to your satisfaction? I am certain, that sqm-scripts is not perfect and will not work for everybody, but I believe a considerable number of users who started out with request for dedicated bandwidth and priority control, after testing sqm-scripts with piece_of_cake and the "sing and dance" configuration tweaks described in https://forum.openwrt.org/t/sqm-qos-recommended-settings-for-the-dslreports-speedtest-bufferbloat-testing/2803 found that sqm-scripts is good enough.

@what exactly did not work to your satisfaction?
Yes this sqm is really smooth, but when i start streaming on twitch i'm
awfully dropping the frames.

So a graphic option (in luci) to add some rules to proretize some ports/PC, would be ok.

For now i'm just waiting for Gargoyle or DDWRT on the stock tp-link fimware.

but when i start streaming on twitch i'm awfully dropping the frames.

Which direction, are you consuming other people's strems, so most traffic on ingress or are you streaming your own data out into the internet, so most traffic on egress? And might I ask you to post the output of:
cat /etc/config/sqm
and
tc -d qdisc
and tc -s qdisc

So a graphic option (in luci) to add some rules to proretize some ports/PC, would be ok.

Yes, there seems to be an overall desire for such a feature, but this is trickier than it seems (as our shaper lives at a place where we do not have nice access to the deNATed interal addresses for tc/iptables so prioritization for ingress traffic is most likely not going to work well).

Could you recomend me a software to enter/move out router files? Filezillla not working at all.

PS:I installed lede back to send you logs.

This some SS from obs to confirmation the losing frames. 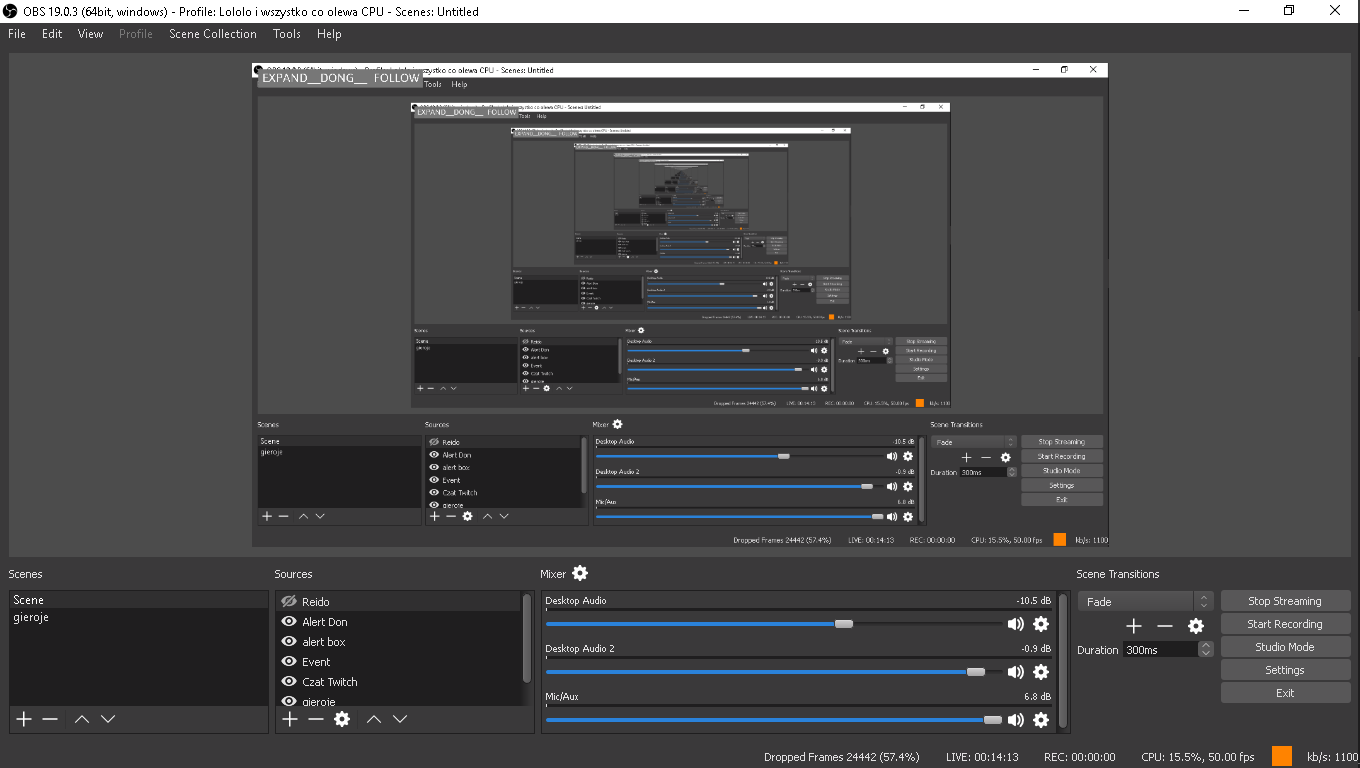 Probably i found a bug. 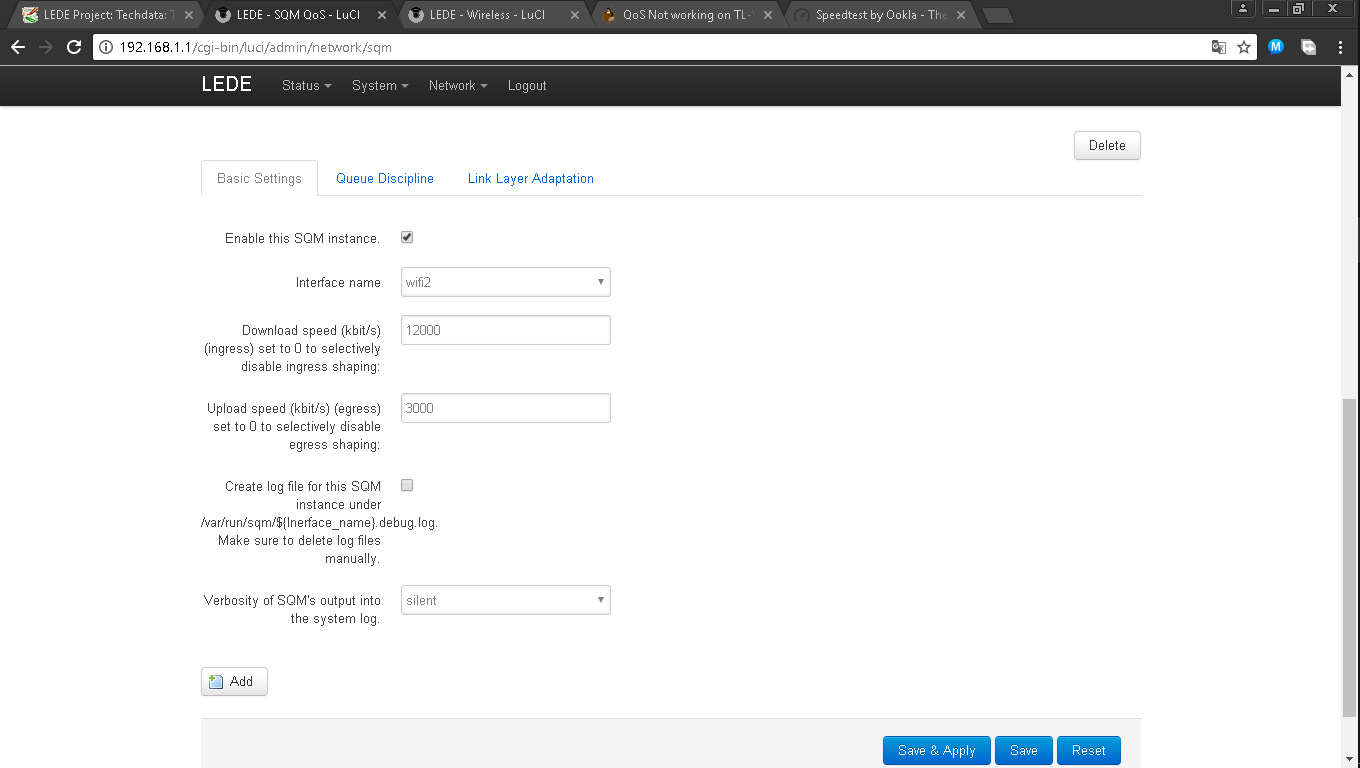 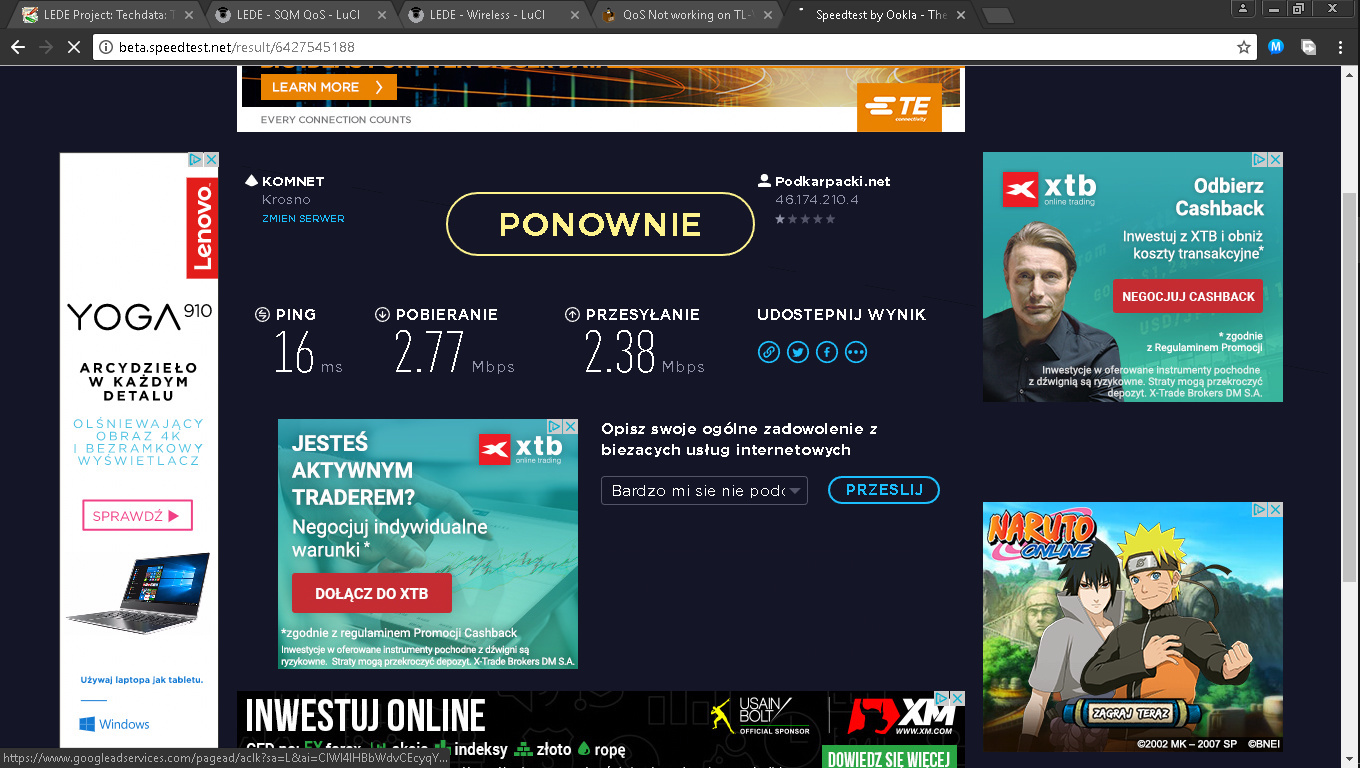 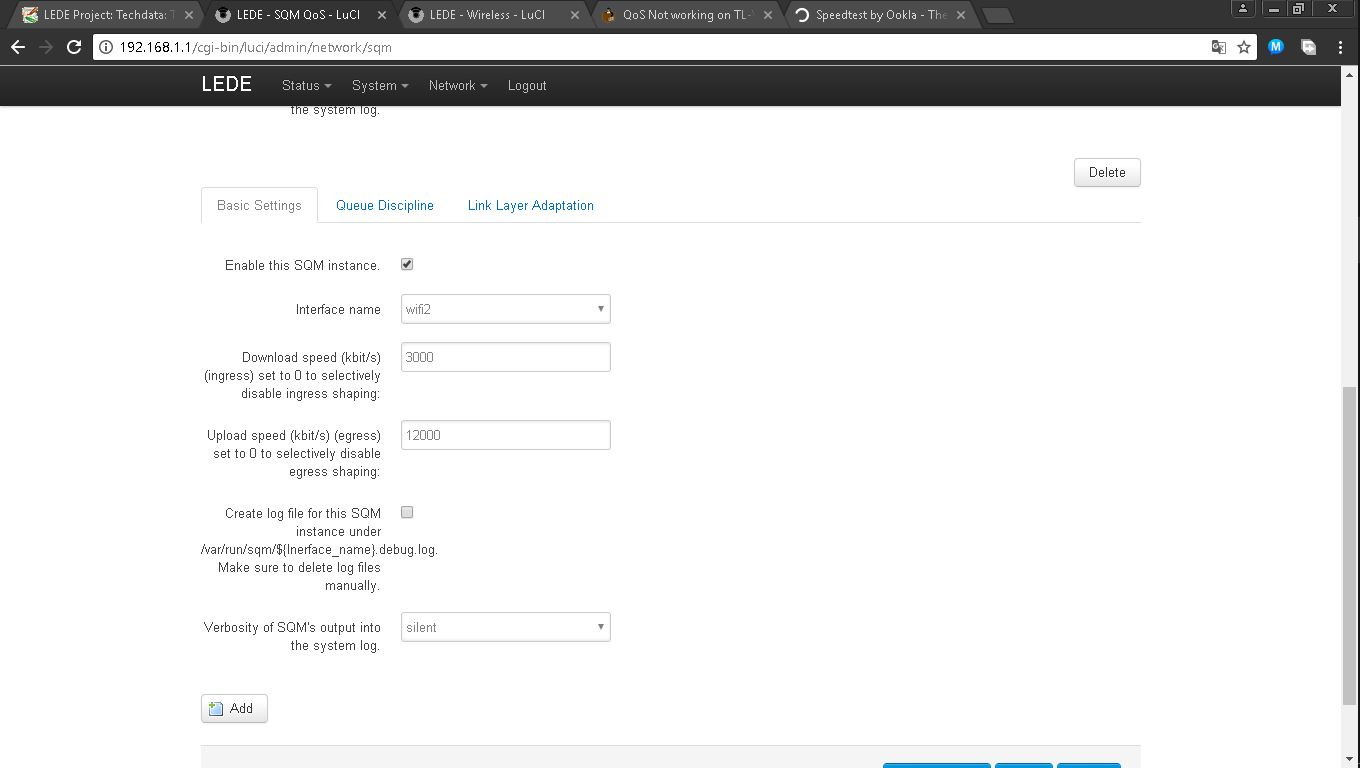 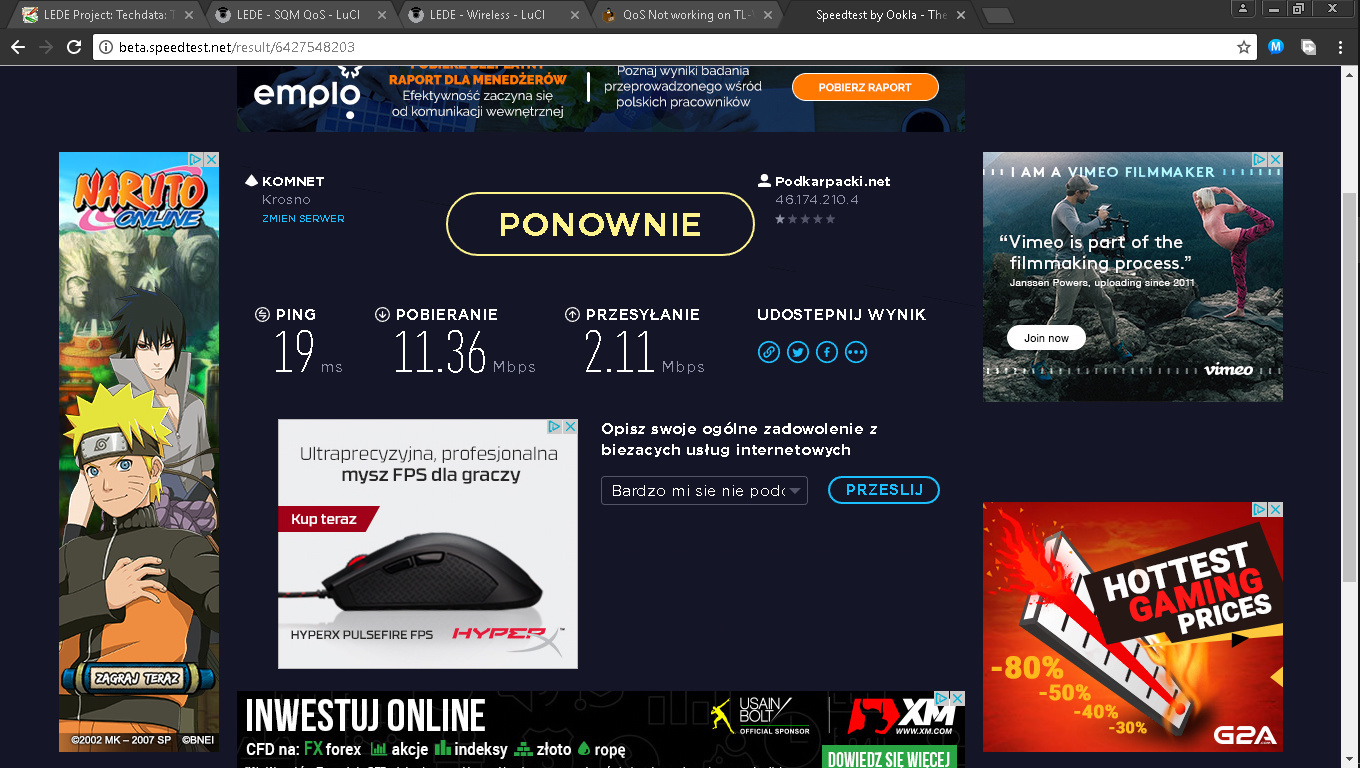 And settings in sqm after reboot doesn't save

I'd hate to be the bearer of bad news but I don't think it's cake or SQM that is causing frame issues in Twitch. Being a gamer I can say that your upstream of 2.11 Mbps is barely enough to support playing a multi-player game now days, let alone streaming on top of it. For instance, if I went in to Destiny with that connection I would get a red or yellow bar showing my connection speed. Upstream is a major factor for this. You have to broadcast your location and data to the server as well as receive other players. You should upgrade your connection to at least 50 Mbps Down and 10 Mbps Up if you even want to attempt to stream.

I wouldn't recommend streaming for the current time, if your frames are cutting out on Twitch. Because of this I would assume your lagging for other players as well, and that's not fair to other players.

Simple solution would be to try this router configuration on a faster connection, if you have a friend or family member with one test it out. If not contact your provider or a different one for plans and pricing.

Okay, could you please remind me again why do you instantiate sqm on the wifi interface? Are you using wifi2 as your uplink? IF wifi2 is a typical internal interface than the fact that you need to specify internet download in the egress field and internet upload in the ingress field is not a bug, but sqm operating as expected. Note ingress and egress are always in relation to the router and not the internet, it just happens that from inside the home network (so the LAN side) internet and WAN interface directionality is identical. See the notes at the bottom of https://lede-project.org/docs/howto/sqm:
“Ingress” is the shaper instance handling traffic coming from the internet, “into” the router.
“Egress” is the shaper instance handling traffic towards the internet, “from” the router.
Enter these strings carefully and exactly. If things do not seem to work, your first troubleshooting step should be to clear these advanced option strings!
At some point in time, these advanced cake options may become better integrated into luci-app-sqm, but for the time being this is the way to make cake sing and dance…
This discussion assumes SQM is instantiated on an interface that directly faces the internet/WAN. If it is not (e.g., on a LAN port) the meaning of ingress/egress flips. In that case, specify egress queueing disciplines as nat dual-dsthost and the ingress one as nat dual-srchost.

@moeller0 For a test i create a 2 networks one for stream 2st for normal use, and i'm trying to limit bandwith (in sqm separately settings for 2 intefances: wifi2 to stream network 2,85mb/s up | 3mb/s down and wlan0 to normal use 9mb/s 150kb/s ) on this way but lede gets tons of bugs...

I;m backing to stock, current version is not working fine. (time to time i had a Disconnections and transfer drops)

3 Mbps is certainly not enough to stream and game at the same time. If it's working fine on stock firmware that's because you have it set up to prioritize for the stream and are lagging in the game. You are not going to be able in most cases to observe your own lag while playing against other players. However, they will. So your streaming may be fine, but other players will observe your lag. Most connections to be considered a "good" connection for gaming are at least 4-5 Mbps upstream. That's just the connection for the game. Streaming uses a lot of bandwidth on top of that:

You should not stream unless you upgrade your upload speed at the bare minimum. Even though you may not notice it in game, it is most likely costing other players lag issues when playing against you. That is unfair to them. Even streaming at 480p there would most likely be lag with a prioritized stream.

If you are dead set on streaming without upgrading your connection in some cases using alternate DNS servers may help. Public DNS servers like Google and OpenDNS are commonly used by many gamers. However, your upload speed seems to be the underlying issue. I have a WR1043ND V3 using LEDE 17.01.2 running 20 Mbps upstream and have zero problems when I stream in 720p. It's perfect quality 99% of the time. My connection to the game, quality wise, is never an issue while doing so either.

@mj5030 I don't offend you, but you have no idea what you are writing about.

You choose how much you send, trough by bitrate video and audio.
Curently i use 2Mb/s for video and 96kb/s for audio so frame can not just drop.
On stock all work just fine.
On old router (TL-WR740n V4 with OpenWRT on "OLD QOS") working fine.

I think the current version is unfinished but i believe someday be.

Clearly I have no idea what I'm writing about? Ok buddy. First off you are using 2 Mbps on an upstream that measured 2.11 Mbps. You posted that buddy, I did not. So that is eating up most your bandwidth right there. That's just a basic mathematical comparison. Secondly, does multi-player gaming run on hopes and dreams? No it runs on bandwidth. You need upstream as well as downstream for it. If your connection is being eaten up by streaming you're lagging somewhere, and that most likely will be in the game.

So go ahead and stream as well as game with your sh*t connection. Hope you don't come across me because if I catch you lagging I always report in game as well as save video and send it off to the game companies and console manufacturers for disciplinary action and review.

With that said, get good scrub!

You do not even read what I wrote...

That's probably because the stock firmware allows you to set it to specific IP Addresses and Ports. SQM and cake does not work like that. It's not broken. It's just not what you needed for your configuration. Either way you're still lagging in the game if you're streaming and probably if you're not with a connection such as yours. That's just basic math. Seriously...