I only got a WRT3200ACM a week ago despite talk of poor WiFi and it's still returnable but it appears to be worth the risk given there's not much else in its price bracket to match the stats. I'm getting 420mbs over 5ghz wireless on a 400mbs PPPoE to the ISP.

Previous driver had some stability issues not found in Linksys stock so got high hopes.

I now want to build this into a new image but never done it. I'm going hunting for answers but any pointers welcome.

Thanks for doing this.

I told my friends and now I'm installing wrt1900acs and wrt3200 for a lot of openwrt and wifi speedfreaks, from airbnb locations to a owner of expensive super apartment...he has three 3200...with radius and vpn tunnel and multiple fiber wan. He has 2gbit bandwidth!
Now running 4 weeks without a glitch!

I'm on 21 specialized build with your mwlwifi, low latency kernel through hardware devcrypto and openssl libs and range over 200 meters from my house, urban environment!
I share a gigabit fiber with 2 neighbors, each with wrt1900acs for own wifi, each with adblock, dnscrypt-proxy2, adblock, IPv6, multiple ssid and VLAN isolated networks...running for 2 two weeks straight!

And I use your driver in combo with a unregulatory wireless-regdb (no dfs, 1000mw and unlocked channels)...

Are you sure that this is legal in your country?

Hence the 'are you sure it's legal in your country?'.

It's up now at: https://github.com/eduperez/mwlwifi_LEDE/releases/tag/a2fd00b

@eduperez The WIFI for my WRT3200ACM is terrible for v21.02.0-rc2, many disconnects and really not useable.

Would it be possible and would there be any benefits if you made your version of the WIFI drivers for v21.02.0-rc3?

I am just looking for decent speeds and especially stability and no random disconnects etc... that a I and others have been experiencing since the RCs have been put out for use.

OperWrt 21.02.0 already contains the latest version available at @kaloz site, and @thagabe abandoned his modifications... I do not think I can build newer packages.

Unfortunately, it does not look like NXP plans to play nice.

Looks like they do not even want to answer this publicly but here it goes anyway:

As we release the i.MX Linux SW using Yocto build system, anyone can find the latest wifi driver and FW on these repositories:

Some old NXP (ex-Marvell) Wifi chipsets driver and firmwares have been upstreamed to official Linux kernel in the past:

Do you recall if you ever offered an ipk sans commit, and if so did it resolve issue.

There seems to be a a lot of people stating the same regarding intermittent wifi on the venom and rango with current master or 21.xRCs, but things are fine with 19.x or old community build (wo said commit). That would seem to be a likely candidate to point ones finger at, especially given its method of arrival in the mwlwifi repo.

Edit: But I suppose it would be easy enough for those afflicted to just replace the FW on the live system they are currently running to test theory.

There seems to be a a lot of people stating the same regarding intermittent wifi on the venom and rango with current master or 21.xRCs, but things are fine with 19.x or old community build (wo said commit).

It is the same as it has always been for this device, now it feels more like a new generation cycle or something that have found the original fault. If you don’t believe me you can search this forum for “wrt3200acm wifi problems”.
I have rango (actually two) and wifi didn’t worked (especially 5GHz in any form or variant) from factory, it didn’t work on 18.06 and it didn’t work on 19.07.
I haven’t tested the wifi on 21.02 but I see no reason why it would work there since the original problem is still there.

It was hopeless to specify country code and that setting messed up ever single radio and DTS never finished. Every time I came home the smartphone never connected to the WiFi.
The only thing that acually worked was 2,4GHz.

Then I bought a TP-Link EAP access point and I haven’t had a single wifi problem since.

Not really, plus you are conflating things. I never had an issue with WLAN cutting out on the rango back when I used the radios on the device. I am not talking about cessation of development, CC, WPA3 or any of the myriad of issues.

There are quite a number of voices saying they have no cutout issue with 19.x, but experience issue with 21.x.RC, so backup to version 19.x where things work. At any rate, for those that have the issue on 21.x.RC / master and might want to try the previous FW, you could try:

to see if it changes anything.

On setting the CC, there was a patch (I still have ti here), plus CC with the third radio was a well known issue, and resolvable if dealt with correctly, at least it WFM on a NA(CA) unit.

Do you recall if you ever offered an ipk sans commit , and if so did it resolve issue.

No, but I can have a look to the historic releases, and create a new one if you feel it could be helpful.

Looking back at the original issue 378 on the mwlwifi github when the OEM BLOB was being extracted and tested, eventually there are people reporting the intermittent wifi issue and backing out to the, then current, previous BLOB. Appears to be possibly client related.

So choice appears to be the more performant BLOB if no issue, otherwise go back to previous. Seems simple enough for those with the issue to use something like the above; problem is awareness I guess.

To offer an easy way to test things I have put up an image that has both BLOBs included, with the link upon installation pointing at the previous 9.3.2.6 BLOB, you can change the link to the current 9.2.2.12 BLOB to test things.

Get the prebuilt image and track the issue here:

I use Linksys WRT32X as my main drive. Wireless is unstable on OpenWrt 21.02.0-rc3. Wi-Fi client does not disconnect but it won't receive/transmit any data for a minute or so. This happens regularly. I had no issues with OpenWrt 19.07.7. I downgraded wireless firmware from 9.3.2.12 to the previous, 9.3.2.6, which is what 19.07 uses. Wireless is stable for me now. If you have a Linksys WRT32X or WRT3200ACM, please compare Wi-Fi stability on OpenWrt 21.02.0-rc4 with my build which includes firm…

Thanks, arinc9. I guess people should follow the thread you created about testing this at the following link? Is it looking like this firmware downgrade will get incorporated into the final 21.02 release?: Users needed to test Wi-Fi stability on Linksys WRT3200ACM & WRT32X on OpenWrt 21.02.0-rc3

Is it looking like this firmware downgrade will get incorporated into the final 21.02 release?

I’m not sure. This was intended to be a hotfix to be shipped with 21.02 stable release until actual fixes on the trunk are backported to the 21.02 branch. I think it will be better to just backport those instead of downgrading the firmware. I’m working on submitting a patch for it.

Some people seems to be having issues after upgrading to 21.02.0, so I decided to grab the older drivers from 19.07, and make packages to install them on 21.02.0-rc4; this is obviously not a long term solution, but I hope it might be useful to debug the issue. 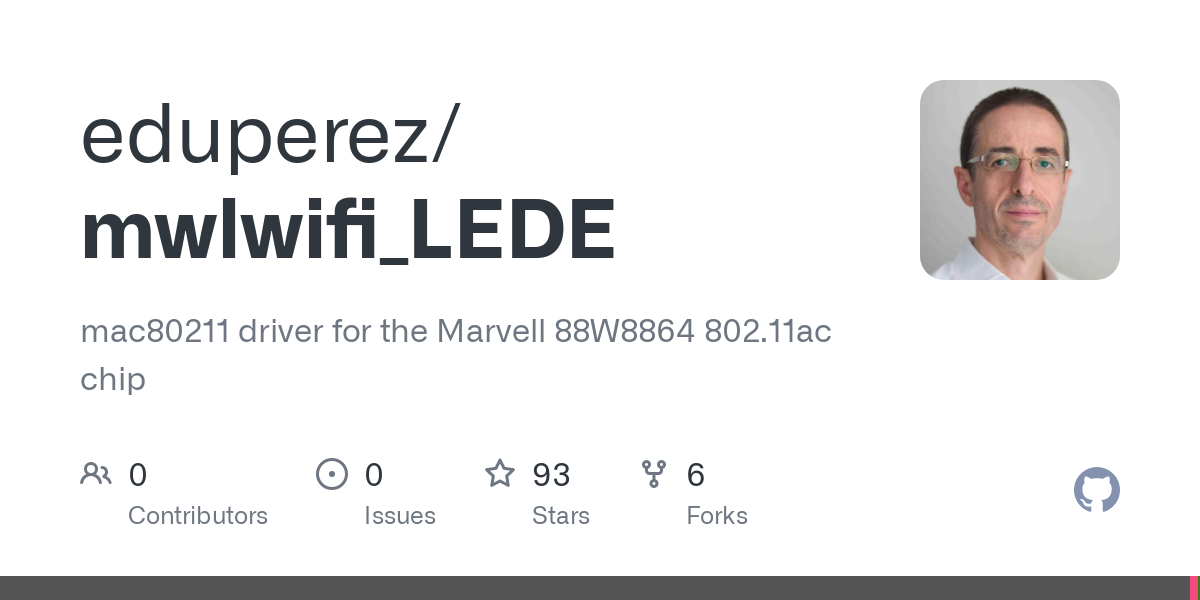 May be of interest : so sharing with you all here : [Resolved] MWIFIEX bugs on EspressoBin-ULTRA