Hello there
I have linksys ea6100 which ac an AC1200. In theory it can be supported by openwrt but there is no firmware image for this device. Can it be supported in the near future? 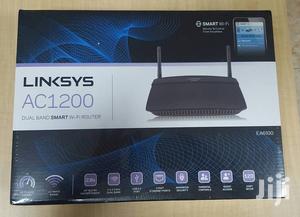 What's 'in theory'? Do you know if the SoC is already supported by OpenWrt etc.? If you can get someone knowledgeable to get a look at it and poke around a bit (or do that yourself if you're skilled enough), you might be able to get it supported.

From TOH it says possible to support !
Unfortunately I'm not skilled enough to do that

Did I buy a dud? Hardware Questions and Recommendations

Based on the hardware specifications, it might be be possible to support it (mt7620a+mt7612e) - but that doesn't mean anyone will actually get their hands on one and start working on it (given that mt7620a isn't a particularly interesting SOC (100 MBit/s ethernet ports only, not very reliable 2.4 GHz wlan, not that fast), with mt7621 being its better successor).

Can it be supported in the near future?

What is your definition of "near future"?

I was able to read from the UART on this router. I can put instructions up if anyone's interested.

Can you help please ?

i mean how to install openWRT on it ?

no one said it was (currently) doable, only that it could be, since there were other, already supported routers, using the same hw platform.

Hi. I haven't worked on this router in a while, but I think I'll see if I can put a build together this weekend if I finish writing the code for the class I TA. If I do, I'll put it here.

Thank you, I’ll appreciate this, I have a graduation project and need to install it asap,

Got it booting over TFTP.

And it should go straight into OpenWrt. We'll have to make a device tree to get things actually working, but it boots. I haven't tested anything yet; will update here when I do.

Played with it a little more. Here's the output from lspci -k:

I've written up a device tree. Wifi, ethernet, and usb all work. Still no nand yet. It's probably beyond my capabilities right now.

the second thing, what is the best way of TFTP on Mac OS, I tried before but there is a connect issue

thank you so much

I've written up a device tree. Wifi, ethernet, and usb all work. Still no nand yet. It's probably beyond my capabilities right now.

woooooow that's huge pro, can you share the codes? and what you exactly did?

E1700 because it has the same SoC as the EA6100. (MT7620A)
Definitely don't flash an image for another router, but you can get away with running it with an initramfs. If you want to take that route though, you're better off using an initramfs image for the netgear EX3700 (also uses MT7620A) because its ethernet config works on our hardware.

the second thing, what is the best way of TFTP on Mac OS, I tried before but there is a connect issue

No idea. I have never set up a tftp server on anything other than linux. On Arch, you can just pacman -S tftp-hpa and systemctl start tftpd, then put the stuff you want to serve in /srv/tftp.

woooooow that's huge pro, can you share the codes? and what you exactly did?

I'll post the code when I get back home, but there's not much there. It's just bits and pieces ripped from the E1700 and EX3700 device trees plus half-written nand and pinctrl nodes. You will gain no additional functionality from using my device tree over using the one for the netgear ex3700 (but you will have less bootlog errors)

If you want something usable right now, your best bet is to set up the build system to make images for the ex3700 and configure it for extroot to boot from USB. Then you could have someting working right now. I'm not sure why nand isn't working, so until that gets figured out USB booting will be your only option for persistence.

Bit late too the party, but any news on this?

No news for the moment. Been busy with other stuff.
I unfortunately fried my laptop's SSD soon after making that post, so I no longer have that device tree. Honestly not a huge loss -- it wasn't too different from EX3700.