I'm currently working on telegraf package for OpenWRT. Because the default binary size is about 147M I started to exclude plugins and reached 47M. With the help of the telegraf developers I excluded the debug symbols and was able to reduce the binary size to 36M.

Since most routers don't have that much flash capacity I want to reduce the size even further. I found the tool upx which compresses the binary while leave it executable. You can find a nice test overview here.
I also found in other threads here that people are using it too.
(In a test I reduced my 36M to awesomely 9M 6M, which are still much)

Now I want to include this compressing into my Makefile for OpenWRT packages and are unsure how to do this. And than I found this discussion that it is somehow conflicting with the compressing of the squashfs..

Now I am totally confused.

is it a static build ?

did you try to strip the binary ?

An ancient version of upx seems to be among the openwrt build tools, but I have never seen discussion about it, or anything that uses it. (Well, search reveal 2-3 PRs, one of whicvh you alread linked.)

The filesystems (squashfs, ubifs, jffs2, etc.) that we commonly use, already offer filesystem level compression, so the additional benefit might not be that great.

You should maybe test and first create a firmware image without the new package, and then include the package in the build and then compare how much the firmware size actually grows.

did you try to strip the binary ?

Sounds like he did, at least to some extent:

I excluded the debug symbols and was able to reduce the binary size to 36M.

Pps.
being able to compress image 6:1 from 36 MB to 6 MB practically means that there is lots of something repeatable easily compressable, like background images, icons etc.

Sounds like he did, at least to some extent:

I meant using the command strip, not by removing unneeded functionality ...

Thanks for your replies!

I am not used to the command strip, but as I understood it, it does the same like compiling with argument -s -w, which excludes debug symbols.

Did you mean something different ? Which symbols should I remove with strip ?

To my knowledge, the size-constraint-oriented OpenWrt build system uses strip by default (with the sstrip as the default strip tool).

(and in general, stripping usually removes the debug symbols, which you have apparently configured to left out already at the build phase)

I excluded the debug symbols

I did a small test on my RPI 3 B with OpenWRT last snapshot.

On the RPI before scp-ing the binary

Did I do something wrong in my test ?

For me it seems to work. Any idea how to integrate that into my Makefile ?

Did I do something wrong in my test ?

For me it seems to work

You didn't test if it was necessary, or would the file system compression do similar job?

What happens if you store normal un-upxed file?

So I guess the result is that it seems to be helpful to use upx compression.

Could you maybe help me again @Grommish ?

If there is already a package for upx, you'd install it to the build system by using HOST_BUILD_DEPENDS:=upx/host, assuming it's been kept up to call the Host build stuff. You'd have to look at the upx package.

If there isn't already one, or one that needs to be updated, then Congratulations! You've officially fallen down the rabbithole

You get to make/update it.

thank you very much!

I will try that

After starting to build my own upx package (which doesn't went that far), I found a git repo that does excatly what I wanted. 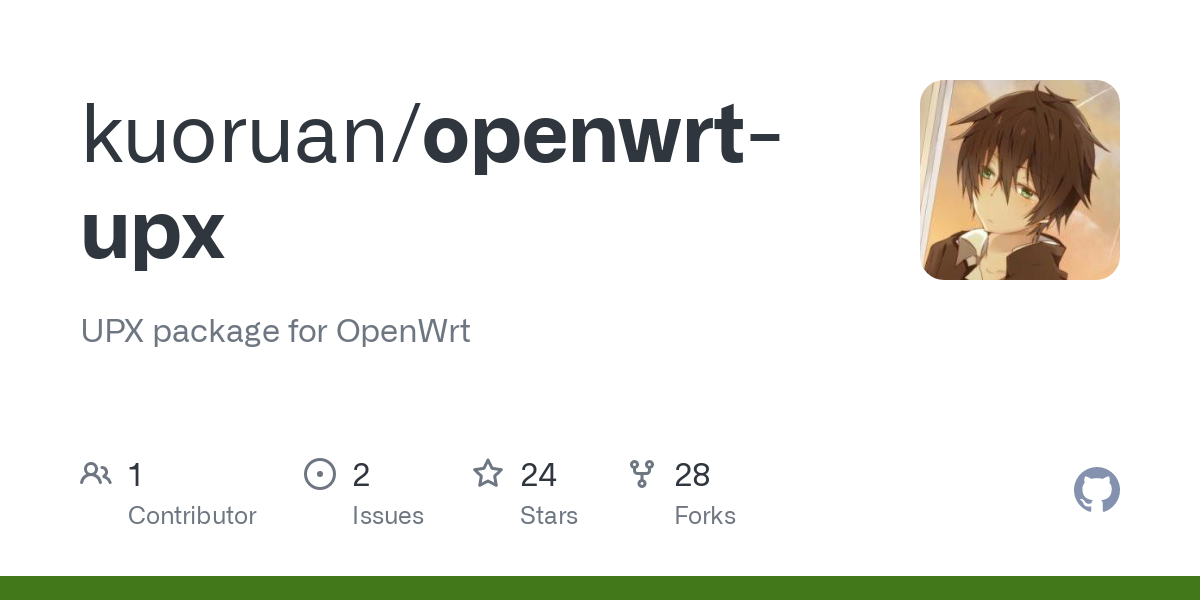 UPX package for OpenWrt. Contribute to kuoruan/openwrt-upx development by creating an account on GitHub.

But am I right, that I need to make a pull request for that first, before I can push my package with PKG_DEPENDS:= ... upx/host ?

That's a question for the repo-gods on the best way to proceed, given that one of your pre-reqs would be a PR on a package that you aren't the author of but would be willing to maintain it? Someone will be able to tell you what to do once you get it all working, I'm sure. I can't see your package going anywhere without the pre-req packages being in place though. Who would be able to build it without both.

I'm in a similar situation where my suricata6 package can't go ahead until rust-lang is finished But, you get them working, you submit the PR and point out that one is contingent on the other, and wait.. You'll still be able to build the package for your own builds, and anyone that really wants it can roll-their-own from the PRs.

Thanks for your thoughts!

I wrote with the author and said that the package was removed from openwrt because of squashfs.
Now I realized that, I am using ext4 on my RPIs.

I guess there is no flag to check whether my package is compiled for squashfs or ext4 image, right ? Or I didn't found on (but I also completely overlooked the HOST_BUILD* variables

squashfs(-lzma) is highly compressed, but it only covers the packages that are part of OpenWrt's default (release-) firmware/ package set. User-installed packages end up in the overlay, which -generally- is jffs2, also compressed, but by far not as good as squashfs could (as it's a re-writeable filesystem).

So, no - unless you build OpenWrt yourself (including your package into the read-only squashfs part), squashfs won't help you to reduce the footprint of your package (how much jffs2's compression can reduce it remains to be tested).

Thanks for your explaination!
I do understand it a bit better now

Would it make sense to you, to differntiate between packages for ext4 and jiffs2 systems ? Because it would make an impact on ext4 systems if the binary is compressed.
On the other side I guess that ex4 systems do have enough memory capacity to handle that, right ?

Would it make sense to you, to differntiate between packages for ext4 and jiffs2 systems ?

You can't, at least not programmatically - sure, you could offer two alternative (binary-) packages, one upx-compressed, on not compressed, but personally I wouldn't do that (or even consider that to be a bug).

The main question (apart from how well it compresses on jffs2, the other potential options as backing filesystems for the overlay usually tend to be on devices with larger storage sizes anyways) would be how likely your package is going to be installed on devices with << ~256 MB flash.

for ext4 and jiffs2 systems ?

Using ext4 is rare in OpenWrt context. It mainly concerns routers without flash, with SD cards etc., in practice minicomputers like RPI and x86 systems...

Most normal routers have internal flash with limited storage space, so it makes sense to use
a compressing file system.

Looking at your PR, I see that telegraaf uses go - is that just a build-time dependency or does the golang package also need to be present at runtime? In the later case, you can pretty much save yourself the trouble to shrink telegraaf (even further) itself, as golang already weighs ~80 MB by itself (and therefore only fits on devices with very large storage to begin with).