Optimized build for the D-Link DIR-860L

Set up from scratch.

Set up from scratch.

Maybe there was an issue with the downloaded squashfs-factory.bin file. It seems that you are the only one with these kind of problems...
I would re download the latest build, flash it through recovery and see if your router will run fine after.

Btw, which browser are you using? I always use ungoogled chromium for the upload process from the recovery page...
https://ungoogled-software.github.io/ungoogled-chromium-binaries/

did a speedtest from redmi 4x, around 35Mbps, which isn't great (over 5GHz i top my internet connection at 75Mbps from Samsung S7) but pages load normally, check for update of the miui

Since r7493, the 3 Xiaomi phones in our household have poor wireless performance. Webpages load in 40 sec, Youtube buffers minutes to start the video, etc. The notebooks on the other hand perform better that before.

I am having the same issue with 18.06RC2 over 18.06RC1. The same difference between these two RC versions and the builds from Bart, is that the later versions both have an updated mt76 driver.

Could you please confirm/deny whether the issue for you is happening on 2.4ghz or 5ghz WiFi? The reason I am asking, is because it sounds a lot like the issue I am having, which is on 5ghz, where the speed sometimes collapses to 0 bits/s. This can easily be seen in an iperf3 test, but it also results in very slow loading of pages like you are seeing. Link: https://github.com/openwrt/mt76/issues/181

For me it is also only happening with Android phones (Xiaomi mi a1 and Oneplus 5). A 5ghz laptop is fine. So it sounds very similar at least.

If this is indeed the same problem (so 5ghz WiFi), we should probably ask @nbd to revert the mt76 driver in the 18.06 branch to the one that was used in RC1.

Edit: @alevan if you could flash the 18.06RC1 and 18.06RC2 builds as well and verify that RC1 is fine, but RC2 exhibits the issue, that would be awesome. Then we are 100% certain that you are also experiencing the issue due to a newer mt76 driver. Right now it could also possibly be something from Bart's build (Although I doubt it).

I believe I am also facing some issues with r7493. Issues are observed on 5Ghz wifi on Android phone (OP3) and Android TV, pages stop loading and speed drops to zero even luci webpages timeout when loading.

Previously I thought it was something to do with having an external storage attached over USB3 which causes known interferences with 5Ghz wifi. Loading webpages via laptop works fine.

I had the same issue previously, when speetest on 5GHz mobile, the router just died. But is resolved with latest build.

here we go (because i "didn't have any issues so far."). Installed r7301 and when running speedtest on my phone through 5GHz the router stops working (no web, no ssh, reboot needed). This happens when speedtest starts the upload phase. Also tested after reseting the configuration of the router - same thing. Tried logread -f before starting the test but nothing was logged. Which logs to check (there isn't anything interesting in /var/log or /tmp/log)? I'll be reverting to older build and report…

I had the same issue previously, when speetest on 5GHz mobile, the router just died. But is resolved with latest build.

The router completely dying is a seperate issue. I think it was some kind of issue in Bart's build environment if I remember correctly, since it didn't happen with master and was fixed when he cleaned up his build environment.

The issue we're seeing is the speed dropping to 0 bits/sec, which can last anywhere from 1-60 seconds or so it seems. During that time, pages fail to load and time-out. The router itself is just fine though, and the speed recovers afterwards. A laptop using 5ghz WiFi is also unaffected.

So I flashed the RC2 on my Dlink. The first time I tested, I had these oscillations (packet drops to 0 for a sec or two), but I had to go somewhere.

When I got back home, I reran the iperf test, and while there were drops, not as drastic, only to 40mbps or so.

And RC1 is fine for you as well?

The weird thing is, RC2 does not have these slowdowns for me, neither does my build. The WiFi seems very finicky regarding which devices you connect to it.
Regarding your router not saving settings, can you provide a partition list of your router?
I am on vacation but I'll try to look to read up as much as possible.

@Bartvz
In my case I haven't noticed any slowdowns with the latest build but tomorrow im going to test a few android clients + iPhone 6. (S7, Galaxy Tab A, Galaxy A5-2017, iPhone 6)

From the release notes: 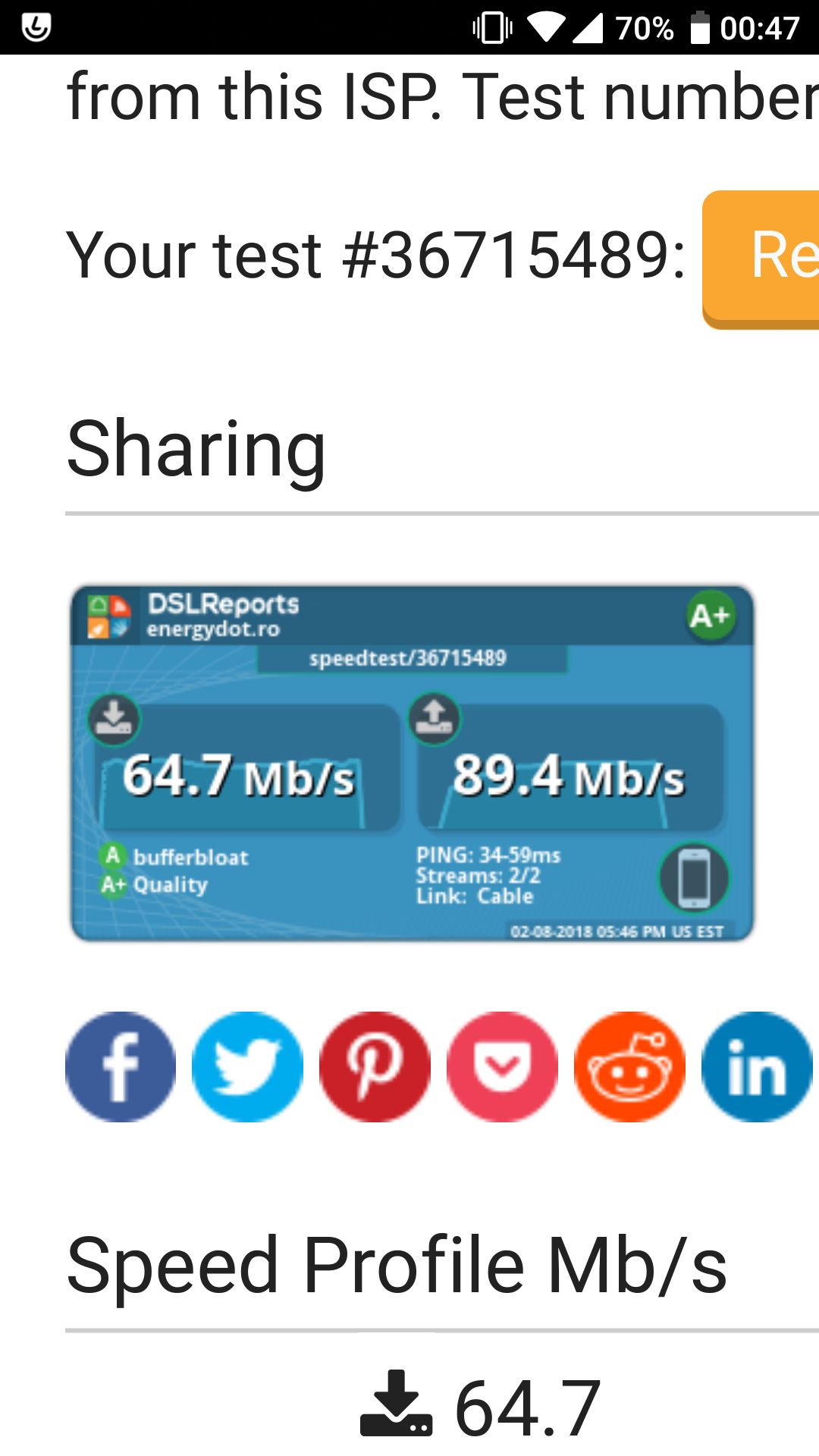 Fiber connection 100/100.
With my Linux laptop, connected by ethernet the results are 92mbit download, 99.7mbit upload.

Now I'll test for the stability on 5g...

So. It seems, my DIR860L was faulty, as I could not even write a firmware to it using recovery. After a succesful write, it wouldn't boot. So I took it back to the retailer and got a new one.

After flashing the latest optimised build on it, I made some tests:

Drops on 5Ghz are still there. The 2.5Ghz is stable.

5MB/sec doesnt seem stable to me, its a damn 45Mbps on a 450Mbps Router it looks really bad! 2.4GHz driver is still buggy! which firmware you tested them on? 18.06.0 or the optimized from this forum?

I believe you expect too much, I get 70+Mbps through a wall but 45 is ok as well, it all depends on too much things. You have to use channel bonding, multiple antennas etc for higher speeds (not laptop wifi or mobile phone)

I never said that it's fast. It's stable compared to the 5G.

It's the r7540 build from this forum. As my leave from work ended yesterday, I have no time to test multiple FWs, so I'll remain on this one until an update.