OpenWrt Wireless AP get no IP from MikroTik Hotspot

I have the following scenario:

MikroTik router board and TP-Link AC1750 with current OpenWRT

On the MikroTik I have LAN and a hotspot.

Normal LAN goes to LAN1 with OpenWRT for devices in the LAN network.

Now I have set up a VLAN3 and added port 3-4 untagged. And added a new interface called Hotspot and connected the hotspot cable to LAN3.

If I now use a LAN cable on LAN 4, I get an IP and the login page of my hotspot appears. So that's going. 2 ports are for the hotspot, 2 ports for the local LAN

Now, of course, I would like to have the whole thing via WLAN. I created a new SSID and selected the hotspot as the covered network.

Unfortunately I don't get an IP assigned by DHCP. No DHCP server is active on the wireless AP, everything is handled by the MikroTik. The problem only exists with the hotspot interface.

Do I still have to take care of anything with the firewall rules or how do I get it that I get an IP assigned via DHCP in this constellation via wireless. As already written above, if I use a LAN cable it works right away. 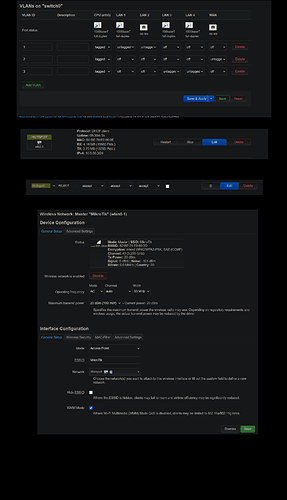 I thank you in advance and sorry for my bad english

Strange. When I open it here it is easy to read and also zoomable. 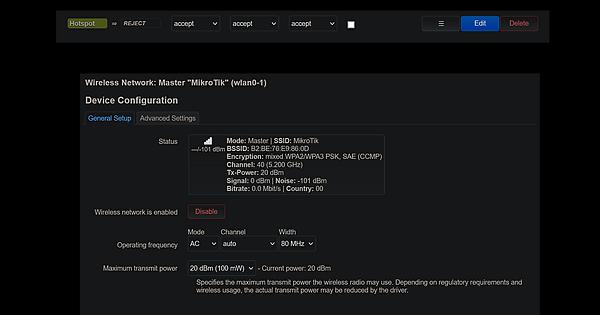 yeah. my bad, I always forget you can zoom twice, my bad

I still can't see much but I see country is "00" which will limit wifi performance compared to setting it to your actual country. That is on the Advanced tab in wifi settings.

The "hotspot" interface should be a bridge of proto none (Luci calls it Unmanaged). Between Ethernet ports it is merely hardware switching, you have to bring the VLAN into the CPU and software bridge it to the wifi for an AP to work properly.

I still can't see much

Ah, maybe it's due to my 4K resolution.
I wanted to post individual screenshots, but as a new user I only have the right to attach one.

So an additional bridge or the hotspot interface itself on unmanaged?

The firewall is not involved with unmanaged interfaces. You don't have to set anything in the firewall.

Great! Works as I imagined!

Thanks for the quick and successful solution