About 2 years ago, I asked my first question, Boot custom openwrt firmware from extroot and if it was possible. 2 years worth of research and getting on and off the project had finally paid off.

Now, 2 years later, I have finally managed to build myself a custom firmware for this router based on the latest stable firmware currently available with extroot support integrated and with 300KB free (at the time of this thread was written, 26 May 2022).

Firmware is currently in alpha stage and I'm still testing this firmware for stable daily use. 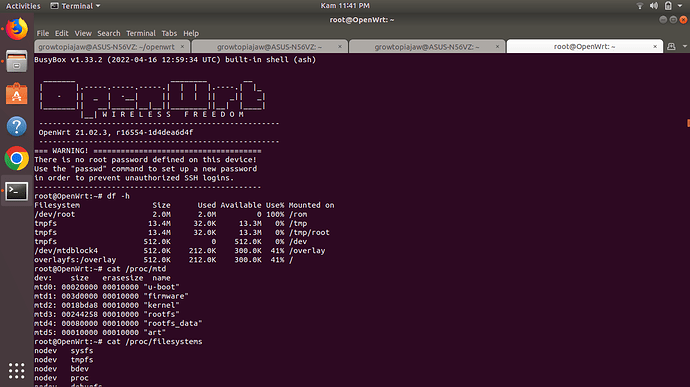 I've built this firmware a few minutes ago and is currently the first release to successfully boot with extroot support (USB 2 support needs to be installed via opkg). So far, everything works as expected.

Right now, the only solution (or two) is to put your router in recovery mode and load tp link’s official firmware through 192.168.0.66 or 88. This option never worked on my router so I can’t confirm. This is why I have uboot on my router.

The second way is to get yourself a CH341A flash programmer and unsolder the rom from your router and reprogram the router. This is only for highly skilled person. Do not attempt if you have no knowledge of how to do this.

Because this router is limited by the 4MB/32MB limitation, there is NO LUCI built in to this firmware. DHCP is also not included. This firmware is highly compressed with (xz) and it might take a few long minute to boot. Virtually every possible package that can be removed from the firmware is removed to allow new versions of the OpenWRT firmware running on this device. Only static ip will be possible. No fancy features are included in this firmware. The idea is to get extroot running so that you can install anything after that.

Reading "132mb ext4 extroot partition" and "ntfs partition for file sharing" in the light of a damned 4/32 device (533 MHz mips 74k, single core) more suggests tagging this as learning experiences and getting a device that's actually up to the job.

Does it ready for use?

Is the project stable now to flash

My god, why would you flash an untested firmware without having uboot?

How to install uboot to make the device ubrickable

Are you facing speed throttle issue in it?