I have been looking for newer OpenWRT firmware for Xiaomi's R1D and R2D wifi routers, which both use internal SATA connector for NAS capabilities. 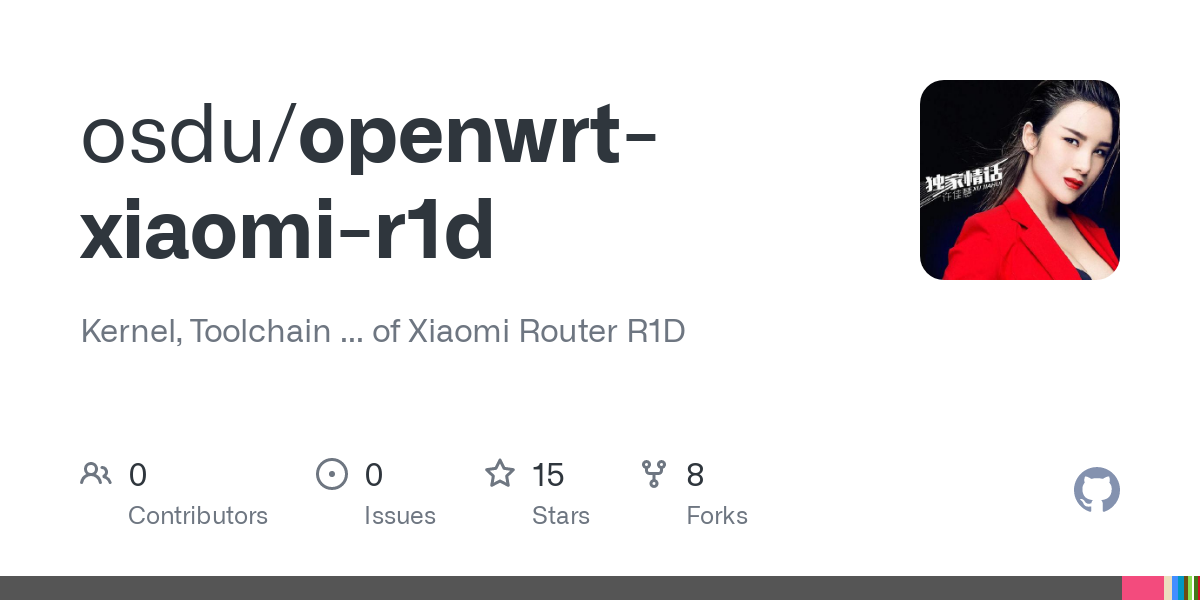 Kernel, Toolchain ... of Xiaomi Router R1D. Contribute to osdu/openwrt-xiaomi-r1d development by creating an account on GitHub.

According to github, the xiaomi r1d and r2d both ship with a really really old version and heavily modified version of OpenWrt already, and both use the same chipset.

So is there any reason that OpenWrt's latest version can't be run on those two interesting devices? Given the fact that xiaomi hasn't upgraded their official firmware since 2018, the official ROM probably got a ton of security holes and it is totally unusable. I noticed constant disconnects and restarting of samba services compared to the Mini flashed to OpenWrt 19.07). I think R1D and R2D are both interesting targets because of the internal SATA hard drive and can act as a good arm based NAS for storage and wifi.

Any feedback or efforts toward a 19.07.5+ build on those devices will be appreciated. Thanks

The reason for that old OpenWrt is usually a vendor SDK that is based on said OpenWrt version. The README (first thing to look at) in that GitHub repo lists all Broadcom chips (SoC, wireless):

Now Broadcom SoCs are supported, but wireless is hit and miss (blame Broadcom for that). So if you don't care about the wireless, you might be able to get it ported to a more recent OpenWrt version. But that will require a lot of work.

Ok, if the problem is wireless, I am actually ok with that. In fact I am only interested in the NAS portion of it( since it is very difficult to find ARM network boxes with SATA built in). I am ok with a 19.07.5 firmware that only operates it as a NAS box to start. Now that I think about it, we also have a USB port, which we can either USB boot an OS img and leave the SATA hard drive only for NAS functionality, or fix the firmware Wifi driver issue by using USB wifi dongles? Just thinking out loud.

*edit
The value proposition is this: wifi is a dime a dozen, an ARM NAS server with built in SATA and multiple GigE connections is hard to find under $100. So any firmware engineer dwelling on this forum wanna spend a day or two compiling a firmware on this little thing since the Broadcom SOC is supported and drop wifi support due to the BLOB? You can kill two birds with one stone since R1D and R2D both use the same Broadcom SOC, I just view them both as 2.5inch and 3.5inch NAS server. Have a firmware that have Samba4, EXT4/XFS/exFAT FS support, and burn it on a USB stick and boot off it and enable SSH login, we can deal with the WIFI blob later on? If Wifi is required, we can even chain another secondary wifi off of one of those GigE ports.

So anyone tried using https://github.com/edwardkc/xiaomi_r2d_linux-4.9.73 ?

I got r2d, but i recently gave up and replaced it with r3pro, which has slightly worse wifi, but usb 3, and of course openwrt support, which makes it a no brainer for me, it was cool to have the hard drive hidden inside the case of the router, but i dont rly care about looks that much, and dealing with xiaomi software, even when it wasnt outdated, it was always a pain. theres also (or was) r3pro (r3d?) with sata and hdd in, like r2d, and i just found out, that theres working openwrt on it, not official though Support request for Xiaomi MiWifi HD R3D - #29 by remittor

I think, back in 2020 or 2019, ive been searching for an alternative to stock openwrt, and i found some chinese page, that had some kind of openwrt baked on that router, but it was too complicated for me to try it, especially with not so great google translate from chinese, and it was my only router back then, so i didnt want to brick it.

Theres also this site https://www.right.com.cn/forum/thread-307721-1-1.html which kinda says it has openwrt working for r2d, but on the screens u can see only r1d and r3d, and the installation info is hidden for some reason...

I also found this https://blog.csdn.net/sunny_tan123/article/details/122255902 but its all very confusing, and i dont think im gonna try it, if it was in english, then maybe...