I have been trying to take chance of a WR841 which I installed a custom 18.06.4 tiny build in order to have SQM. Everything works fine until I decided to have the bridge thing for a PS4.

I am using a Mikrotik with UPnP On and static IPs as a main router and an OpenWRT to my cousin. I decided to assign a new VLAN so port 4 on the second router be able to communicate with Mikrotik to open ports.

I assigned the same static IP (for leasing the router) to that bridge, and put it within the same firewall of WAN. (see picture)

I have internet on the router and the PS4 is detected by Mikrotik fine. The issue is that Mikrotik just binds one of the two (WAN or Bridge) and the other keeps "offered" and that sometimes UPnP does not work even if the ports are opened.

I was wondering if there is another approach to have this working. Like Ethernet 4 to be transparent and WAN as normal client and LAN as normal net. 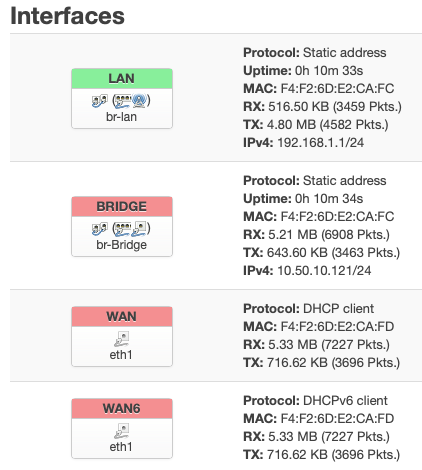 Change WAN to a bridge and add another eth port to it. That port will completely bypass OpenWrt and be part of the main router's LAN.

Though SQM on a WAN works best if all traffic goes through it.

It think this might override the function of the second router.

I want to keep the Wireless to be part of the second router's LAN to have wireless clients.

I am not that savvy and I don't want to mess it.

You need to describe more completely what you want to accomplish, including where your ISP is connected, all the subnets involved (at least by name and function), and what traffic you want to flow where.

Yes, I am receiving a Public IP which a Mikrotik device handles. I have some OpenWRT devices within a network.

What I want is the following: (What's more feasible, better)

1- Have a normal OpenWRT router with port 4 acting as a switch (so Mikrotik could see it).

2- To determine if when an ethernet cable that comes directly from Mikrotik and uses the port 1 on OpenWRT, all ports change automatically to "switch mode". In this one, I would like to know if possible to have Static addresses in one port (or two) and keep the rest as bridge.

I figured it out and will share it so anybody with the same case could look for a better use of the device (This scenario works flawlessly as when your WAN port gets burned):

First, keep in mind when connecting a WAN link to any of the ethernet ports of the OpenWRT router, will consider it as a switch in which you will receive either the Public IP or a NATed address.

So, you have to create a tagged VLAN (in CPU) and untag the 1st port to make it be a WAN and if you wish to have one bridged, just untag any of the remaining ones (like 4th port) within the same VLAN.

Then, change WAN and WAN6 interfaces to be the newly created VLAN in physical interfaces. (Keep LAN interface as it is).

That's it. With this setup, you will leave the original WAN as a backup and will be using port 1 as WAN, ports 2 and 3 as LAN and port 4 as Bridge.