hmm. 106 still has some wierd bugs. 107 is now out stable. I'm still using the edge builds and they work nicely.

I didnt see where they install AGH in that script. do they use /opt too?
Theres a few issues in that smaller space routers the AGH binary is 35mb and it backs it up to a subfolder when you upgrade via the webfrontend. Thats 70mb you need spare +logs and filters.

You can avoid that by unpacking the new version of the top of the existing version if you are confident. I made a script for it in my new thread.

The package currently ships a broken binary for 106.3 anyway, so it should be avoided currently. At the moment, I just install the opkg package for the init.d script and then overwrite the binary. As you say, it has bloated to over 30 MB now, before it was 20 MB, so it's more of an issue for routers with less flash space/RAM.

There is a PR for bumping the package to the latest 107 release: https://github.com/openwrt/packages/pull/17409/

It also provides a way to modify the working DIR directly, so instead of /tmp you could configure it to /opt or even /mnt if you have external storage configured. Hopefully it gets accepted and merged, as it will fix the binary and allow more customisation for avoiding storing everything in tmp, without having to directly modifying the init.d script.

Nice. i added a note that they should consider using /opt/AdGuardHome so people using the AGH wiki find the files in same location. Also makes it easier to mount and use that folder from a usb key as it is only for AGH.

Looks like they've chosen /var because it's a symlink to /tmp but if you configure /var on persistent storage then you'll benefit.

Whether or not it will default to /opt for the official package I don't know. Of course, may can follow your guide with /opt and it will work just fine also.

It was my frustrations with the 104 opkg version that caused me to look into things and help improve install instructions to do it manually and integrate into OpenWrt and now they have the 107 version packaged and put me out of work!

Still it was good practise and helped people so its all good. I added to the PR and hopefully some of my notes will improve things for the opkg version so it will be far easier to use AGH on OpenWrt for future users.

Your guide is really helpful and certain has helped and will continue to help users. The official package was a little rough in the beginning but hopefully the 107 release will make it a lot better, so you can just use opkg. This however is officially tested and supported for 21.02 onwards, so manually installation may still be needed for those on older builds. You can run the package on 19.07, but there is a possibility dependencies and such may not work, so manually installation is still maybe required for certain users.

What might be good is preserving these guides into the official wiki?

Currently there is no official wiki page for AdGuardHome on OpenWrt, I think there's some great tips and guidance in this that should be incorporated.

I have wiki access, but I'm not going to take parts from your guide without permission, but that could be a really good thing. We could then even get the official AGH team to link to the OpenWrt wiki for anyone using on OpenWrt and have a single source, where others can contribute?

A big part of the issues with the opkg version (certainly in the 104 release) was that it installed into /tmp and thus lost everything when you rebooted. That may have resulted in some colourful language on my part and a look into AGH offical install. 106 as you say is broken due to dependencies on Go but a simple replace of the binary solves that.

107 brings a HUGE chunk of fixes and some that were badly needed for OpenWrt.

With the updated package things should be vastly easier for users now and I had a good back and forth with the PR requester and I think he is aiming to add some of the things from my guide into the opkg version.

I could certainly try wikify my updated article for those who wish to keep on the "bleeding" edge version of AGH. Regular users can use the opkg version now its more current and has some nasty issues resolved.

One of the things I'd like but its only timeframed for a later 107 build or even 108 is their fixes to DHCP.
That way you would just replace OpenWrt's dhcp and flip DNS and DHCP over to AGH and avoid the reconfiguring. (may need to be some tweaking of NTP for updating time/date and also DoH certs)

(edit - this explains it more. https://github.com/AdguardTeam/AdGuardHome/issues/2830 )

Stable vs edge builds is a good point. There's certainly a need for the edge builds i.e. testers, getting new features immediately etc, but it's also important to highlight and encourage using the stable release for those certainly on release builds. If you're on snapshot, chances are you are more likely to be aware of this.

The wiki could basically present two paths stable and edge and go from there, I'd imagine OpenWrt devs would encourage the use of opkg and as you've said that could be classed as the stable installation and then edge builds could be using your original guidance/script. I'm not sure if the opkg package will ever ship an edge build, it is more likely to probably move between the stable versions even in master.

Stable vs edge builds is a good point. There's certainly a need for the edge builds i.e. testers, getting new features immediately etc, but it's also important to highlight and encourage using the stable release for those certainly on release builds.

It was more on the AGH end tbh. the 106 > 107 was a bumpy road and its why i switched to using edge builds to keep fixing issues. That being said. 107 is far better place now and is a much more capable "beta" if you will.

Thanks. But do you also give directions on how this can be done?

or use the wiki and use the opkg version here : https://openwrt.org/docs/guide-user/services/dns/adguard-home

What's the best way to make sure my filters are persistent on a reboot? Just installed adguard via the opt package and every time I reboot I have to manually refresh my filters for some reason. (rules count is set to 0 on reboot)

I'm running AGH and OpenWRT in a RPi4 (CM4 really, with DF Robot router board) and I have two interfaces:

And I've tried everything: different firewall zones, added rules to allow DHCP and DNS for eth1.10, add DNS forwardings with both hosts from AGH, but I cannot make it work for the Guest interface (eth1.10).

Can any of you help me?

I just use one IP for bind host and reroute DNS requests by rules.

Thanks for the tip, but it didn't work

you should pass the required DNS for each zone as part of the dhcp request. Set option 6 for the dhcp for that interface.

In any case, here's further details on my setup.

In Openwrt, DHCP and DNS > Advanced Settings, I have the DNS server port as 553 (because Adguardhome takes the port 53).

In Openwrt, Firewall, I have a "guest" zone, to which the interfacte eth1.10 is assigned to. Under Traffic rules, I have all incoming IPv4 and IPv6 from "guest" to "this device" directed to the DNS IPs, port 53. Note: the DHCP works, just the DNS doesn't work.

In Adguardhome, I have the reverse DNS servers set as the IPs of interfaces with th 553 port as set on the first step.

DHCP option 6: which DNS (Domain Name Server) to include in the IP configuration for name resolution

Set these for your guest and it willl broadcast DNS and DHCP as well as an ip address to clients on that interface.

Let AGH do the reverse DNS back to dnsmasq for PTR requests.

I use the same config as mercygroundabyss described and it works flawlessly since day one.
Here are the screenshots of my working config. 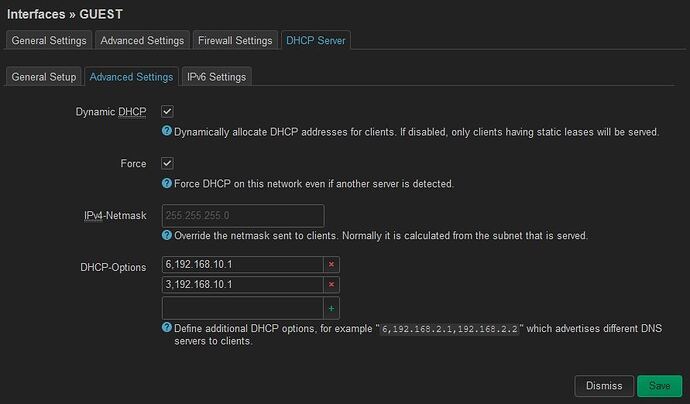