The OpenWrt community is proud to announce the fourth release candidate of the upcoming OpenWrt 21.02 stable version series. It incorporates over 5800 commits since branching the previous OpenWrt 19.07 release and has been under development for about one and a half year.

Full release notes and upgrade instructions are available at
https://openwrt.org/releases/21.02/notes-21.02.0-rc4

In particular, make sure to read the regressions and known issues before upgrading:
https://openwrt.org/releases/21.02/notes-21.02.0-rc4#known_issues

To stay informed of new OpenWrt releases and security advisories, there are new channels available:

As always, a big thank you goes to all our active package maintainers, testers, documenters, and supporters.

I was hit by the small lease time for DHCPv6 issue before, which works in RC4 so far.

Seems to be the same as the bug report here:
https://bugs.openwrt.org/index.php?do=details&task_id=3961

How is it determined which new devices get added to a new release candidate? I would have liked to have the additional devices that were added to the realtek target supported. These are inexpensive readily available devices (Netgear GS308T v1 and Netgear GS310TP v10).

Thanks to hauke and the rest of the OpenWrt developers.

Within the first eight hours of testing, encountered an android smartphone on 5 GHz WiFi displaying: Connected, no internet.
Signal strength was excellent.
Connecting to 2.4 GHz WiFi then switching back to 5 GHz resolved issue.
Did not notice anything in the system log corresponding to error.

This is decided on a case by case basis, the patches need to be small and non-invasive enough (so far typically the case for new rtl838x devices) to be deemed safe - then you need to get the attention of a developer (by providing a tested pull request/ patch against openwrt-21.02 or ideally naming the commits that could be cherry-picked unchanged). In the end, it comes down to raising interest for adding these devices to a developer and convincing them that the changes are low-impact and safe to apply at this stage (not creating new problems that would need fixing).

I confirm that RC4 broke something on Archer C60 v2. After upgrading, the repeater was never able to connect to the router and clients became very slow to establish a connection.
Reverting to RC3 solved the problem.

Just upgraded my router to RC4 and all seems fine. Thanks to everyone who contributed OpenWrt project.

Updated on my WRT32X, running great. 5GHz wifi stalled a couple times on my iPhone where I had to turn off/on the wifi in phone settings, hasn't done that at all on my ThinkPad. Weird.

Below is a package list I'm running for anyone curious:

Oddly, it is also based on 5.4 kernel, has the latest wifi firmware blob, but does not have these same network connectivity issues. The only thing that it lacks is DSA.

The complexity of this issue is far beyond my understanding though. It seems to affect all devices connected to it, including wired devices.

Does this release candidate 4 comes with Luci embedded? I was talking about factory build, the new you install over stock firmware. 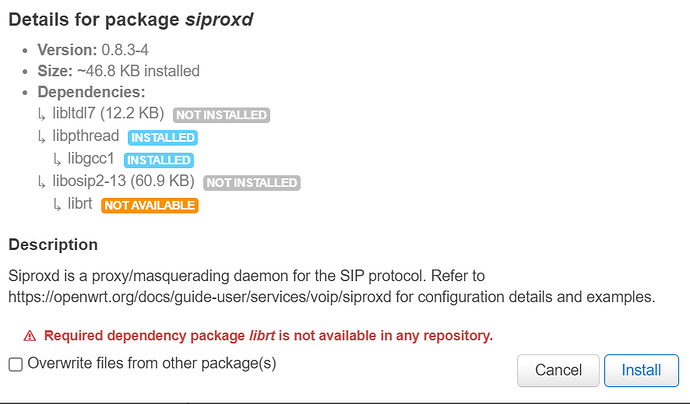 Yes LuCI is included pretty much all release builds including this one.

Thanks for your reply, gonna try it

Our community mesh network has still some errors with ipq40xx devices and the switch. The switch just freezes/breaks, not sure what exactly is happening. WiFi is still working and ip is still showing all interfaces as active.

So the tx direction seems broken:

When the message does not fit into the send buffer of the socket, send() normally blocks, unless the socket has been placed in non-blocking I/O mode. In non blocking mode it would return EAGAIN inthis case."EAGAIN is the error code tied to "Resource temporarily unavailable"
https://linux.die.net/man/2/send

It is often appearing if links changes happen. Rebooting switches that are connected to the device or adding new links.

There is also some similar issue that has to do with segmentation. I hoped that already a DSA driver would replace the sw-driver. However, that will not happen. I already wrote with another openwrt dev. This issue is very hard to reproduce but it happened several times (Fritz!Box 4040, Fritz!Box 7530). Maybe someone else also experienced similar issues?

As I've been sick and tired of the instabilities of OpenWrt on two Fritz!Box 4040 and the Linksys EA8300, I thought a give the ZyXEL NBG6817 a try and wow this thing just works stable as I was used to from the old Buffalo WZR-HP-AG300H. I can only assume that this issue might be related to the amount of RAM. The unstable devices had just 265 MB and I could get them down easily by just watching a YouTube video, downloading somehting with wget, git or Steam. The ZyXEL has 512 MB and I think this …

still have the following error in logs: