I picked up a TP-Link Onhub from my local thrift store thinking it might be supported. It was only 3$ so figured why not. From what I can tell it is not supported, but is listed as a WIP.

I can't find any other information on it though since the OpenWRT forums are gone, and I was wondering if anyone knows if this router is being worked on. So if it is I can throw it into storage for later, or give it away if not.

I doubt somebody is actively working on it looking how rare it is,but for 3 bucks everybody would pick one.
Its got really powerfull hardware.

Yeah the hardware is really good and would definitely be a huge upgrade for me over my current crappy netgear. However it needs an android device to configure it, and I still use an old flip phone. There's also the creepy google stuff that makes me warry of this thing.

Yeah,I wouldnt use it too without something like OpenWRT on it.
Would love to help,but I dont have access to one of those.

Google is rolling Coreboot and ChromiumOS on it.
God knows what is being collected

has anyone attempted anything with this device yet ?
I see it used coreboot usually used on x86 hardware & PC's
is anyone working on this or interested to ?

I see it used coreboot

That wouldn't make it any easier, on the contrary - as this differs massively from the 'usual' bootloader (u-boot) on ipq8064.

--
I'm regularly checking for cheap ipq806x devices on the used markets, as I've been looking for a spare test device for quite a while now (I really don't want to 'break' my main ipq8065 router all the time) - although I do include the onhub devices in my search, these are basically non-existent on the European market.

There has recently been activity on the ipq4019 based google wifi mesh devices (I think "gale" is the code name), maybe you can find some inspiration there.

Thanks slh
I'll keep waiting for that patch top go through
look's like a lot of what is needed should be in there
http://lists.infradead.org/pipermail/openwrt-devel/2021-January/033353.html

A lot of the documentation for the boot sequence and payload is documented in a few chromium slides as well as a few of the google OnHub developers seem to be active on reddit and additional documentation could be gleamed from there. I'm not sure if you were curious about logging into the router or if you were looking to run WRT but exploitee.rs has a ton of documentation on both the TP Link and Asus models although more internals are documented with the asus as it seemed to have a dedicated follower where as the TP Link seems easier to root and enable developer mode although less is documented about it. I've been looking into running WRT on my TP-Link variety.

I've been looking into running WRT on my TP-Link variety.

Thanks for sharing. Have you had any success on working with coreboot?

I mean you've got a serial console port coming out that will allow you a fair variety of tools to run. I will take a look when I've got some free time. The whole process needs to documented more thoroughly although a little launching off point isn't too bad.

I decided to try adding support to this router myself, and I spent some time taking it apart.

These are likely the serial port based on the multimeter's measurements. 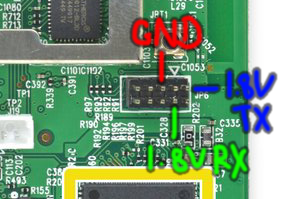 But I couldn't get the boot log yet because the spacing between the pins is too tight. 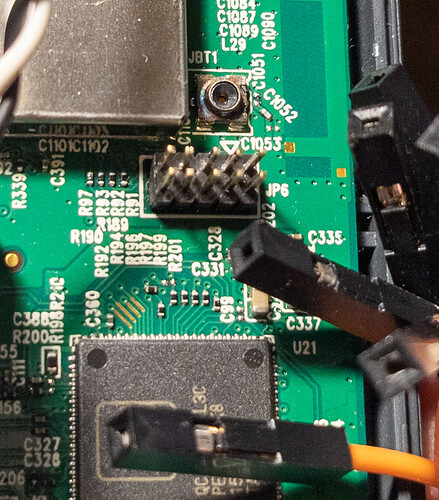 So right now, I either have to do some soldering (I'm very bad at this, but I can still try) or find some jumper wires with smaller headers (this is preferred, but they seem to be rare)

The common pin spacing is 2.54mm, but you'll often also find 2mm spacing. Make sure to get a 1.8 V capable usb2serial adapter (and jumper it accordingly).

It might also be me not knowing the right keywords to search on amazon.

Would hook clips be to big too?

The ones that I have are too big, unfortunately.