I cant write the flash to emmc bcause I can ping the device but nmap shows that ssh is not running on the device...

Any idea on this as I was going to use this device to host an rtl dongle ...

Is this your launching pad Wiki?

Been reading the horror storys of the standard packages including, breaking things.

So I removed them as they would fail to build on the page.. and replaced them with and got a success.
wpad-openssl libustream-openssl 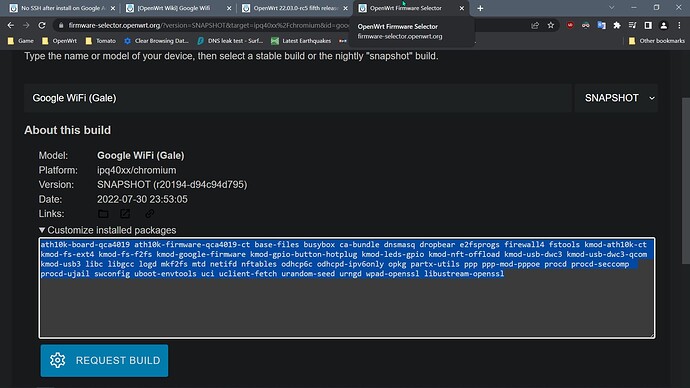 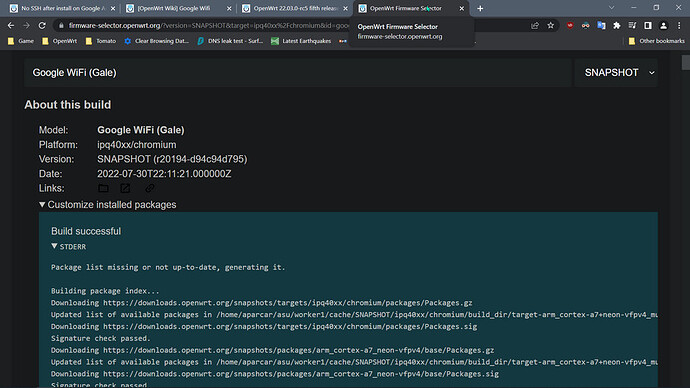 thanks for the help, I am working on a project and this form factor works perfectly

also where is ssh package at ?

ok so i got a custom firmware to boot

Fill in my blanks: 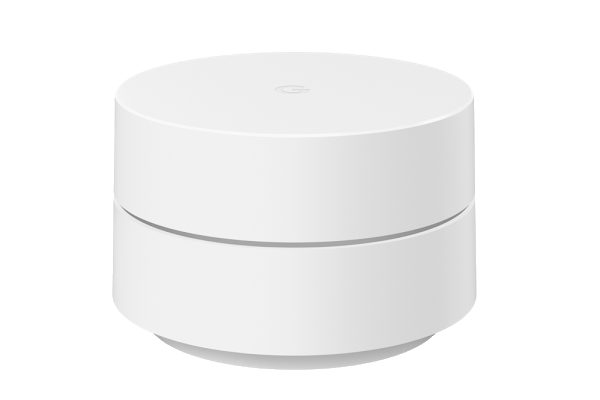 Google Wifi Google Wifi is a 2×2 802.11ac AP with a quad-core Qualcomm IPQ4019 SoC, 512 MB RAM, and 4 GB eMMC storage. Its stock firmware is based on Chrome OS, including a bootloader based on Coreboot and Depthcharge, and can be convinced to run...

A. I have it to boot the firmware...
B. It shows up in by DHCP list as openwrt
C. When trying to ssh to the device from windows with putty it wont connect.
D. NMAP does not show that any ports are open on the device when scanned
E. this was done with stock and custom software images

Is this your launching pad Wiki?

Dropbear is part of any OpenWrt image. The Ip your screen shot takes this one or more levels past an initial install, as the default OpenWrt Image would put you on 192.168.1.1 for ssh access.
Did you start/follow the Wiki?

Yes... but I got to the point to commit the image to the onboard memory via ssh and could not get to it.

10. To program your image to the main flash, SSH to the device and run the following:

Misunderstood the thread by title after install; thinking you had successfully flashed OpenWrt.
Your stuck at step 10 assuming the previous steps were followed correctly.

The wiki was last edited by @bnorris who removed a deprecated section: "Supporting activities".

Perhaps this user has some insights from whom you could gain assistance.

Thanks for looping me in. This is unlikely to be your problem, but note that I've fielded some confusions/issues from other users at: Google WIFI - can't make flashed OpenWrt permanent - dd error

I plan to make some Wiki updates eventually...

To your problem: if the system is up and requesting DHCP addresses from your uplink, then that sounds like you're booting OK, and the remaining SSH problems sound more like a general OpenWrt problem.

Dumb question (since I've also hit these things as a new user): are you trying to SSH via your WAN-side link/address, or via a LAN connection? Upthread, you show a DHCP address of 192.168.88.30 -- that sounds like your WAN address, and by default, OpenWrt's SSH configuration does not allow SSH via the WAN port. You'd need to connect to the LAN port, and SSH to 192.168.1.1.

does this look right with a 4gb emmc? or am I mistaken ?