I have successfully installed and tested nlbwmon and luci-app-nlbwmon and in testing it appeared to gather bandwidth stats successfully. I have now got it up and running in production but I am seeing multiple IPs for each MAC address.
The single production LEDE router serves two VLANS both connected to a central location via a wifi connection to the LANs via WDS.

e.g. when you expand each MAC address entry in luci-app-nlbwmon you see:-

In testing this was not the case - each device was listed by MAC address with one IP address associated with each MAC address.
In testing the only difference was that I had both the central router and the Client1(WDS) with LEDE installed.

rather than in production where the APs are non LEDE.

No hostnames or MAC addresses for each device are coming through to luci-app-nlbwmon.
So, it seems like only the IP addresses, not the MAC or hostnames are being passed through the Client APs via WDS to nlbwmon.
Strangely in the central LEDE router both MACs and hostnames are visible in the DNS connected hosts screen in LEDE.
Only the two MAC addresses are visible with multiple IP addresses for each MAC in the ARP table on the central LEDE router.

After testing the test router was put in place of the original production router so I know that the configuration is identical - only the SSIDs were changed to suit the production environment.
All routers are from the same manufacturer - TP-Link.

Does anyone know any way around this without installing LEDE on my production Client APs.
One client AP is up a pole outside and difficult to get at and replace if I brick it.
The other client AP is not supported by LEDE, but I can install LEDE on to it and was the same model of router that I used in testing.

I personally have switched to wrtbwmon and it works well for what I need...

Thanks for the suggestion, maybe changing to wrtbwmon would help. I am getting statistics collected OK, it's just that the hostnames are, annoyingly, not being populated in nlbwmon like they were when I was testing it out.

I may compare wrtbwmon with nlbwmon and give yamon another try in test if I have the time.

The issue you describe looks like the non-LEDE APs perform some sort of MAC address rewriting - are they operating in some sort of repeater mode?

Jow, they are in WDS mode as they are wireless links.
However, I find it strange that in the central LEDE router both MACs and hostnames are visible in the DNS connected hosts screen in LEDE. So even if the the non-LEDE APs perform some sort of MAC address rewriting then the original MAC address of the devices is getting through, just not to nlbwmon.

nlbwmon uses the neighbor table to resolve hosts, do you see the expected mac addresses in ip -4 neigh ?

Jow, thanks I will check as soon as I get the chance.

Does not seem to be recognised in LEDE.
Is there some package available to enable this?

That link has changed.

The new one is 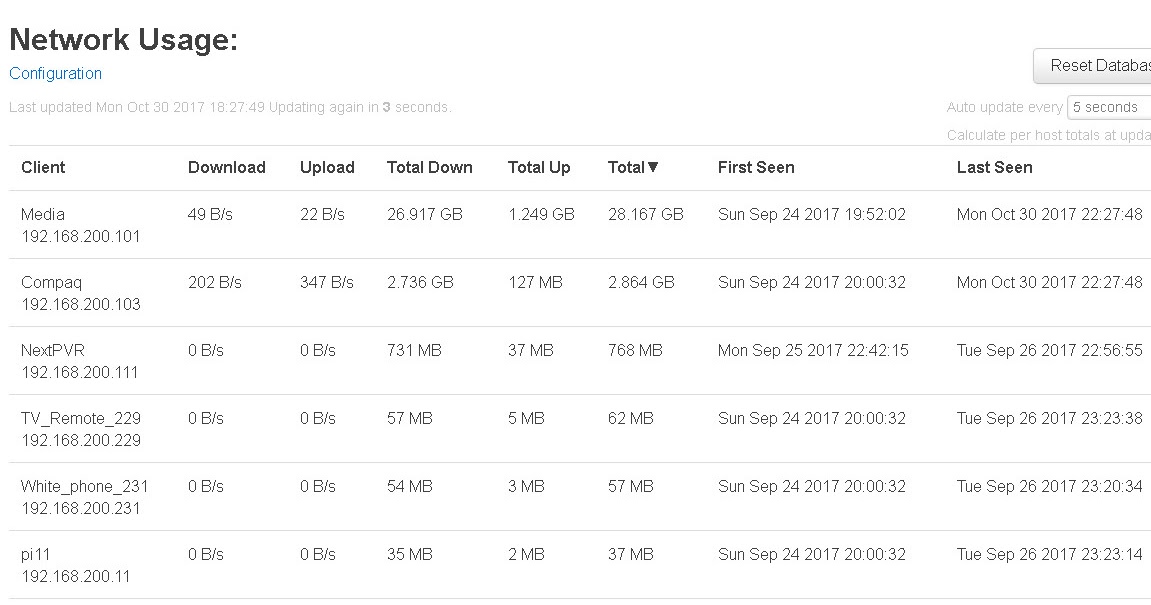 I know I think it has something to do with Luci new web page design or css not sure, I think it actuall broke on 18.0