I have two devices connected on this network that serve their own subnets, 192.168.3.x and 192.168.4.x (another wireless router serving a far-flung part of my house and a security system's PoE switch). Both of these devices and stuff connected to these devices can get out to the Internet OK. However, if I want to use my laptop (on the .2.x Linksys network) to talk to a device on either of the subnets, it doesn't work.

Do you actually want 3 different subnets, or is this just the way things worked out when you did your initial setup? Can you provide a description (or better yet, a diagram) about how things are connected?

If you do want to have the subnets, what is your goal in terms of inter-network routing? Full access? Limited? Isolated?

Have you considered setting all of the networks up on your main OpenWrt router and then using the other devices as switches/aps?

The different subnet addresses was the only way I could figure out to get the devices to get to the Internet, but when I only know real basics about networks and networking. I am not invested in the idea of subnets or network segments if there's some other way to make everything work. As for goals, I would like everything on my Belkin network (the .4.x) to behave the same as if it were connected to the Linksys directly. The goal for the security system (.3.x) is a little different. The system itself (.3.1) needs to talk to the Internet and to other devices on the Linksys network or Belkin network. The cameras attached to .3.1 (.3.11 through .3.18) don't necessarily need to get to the Internet.

Drawing of my current setup attached. 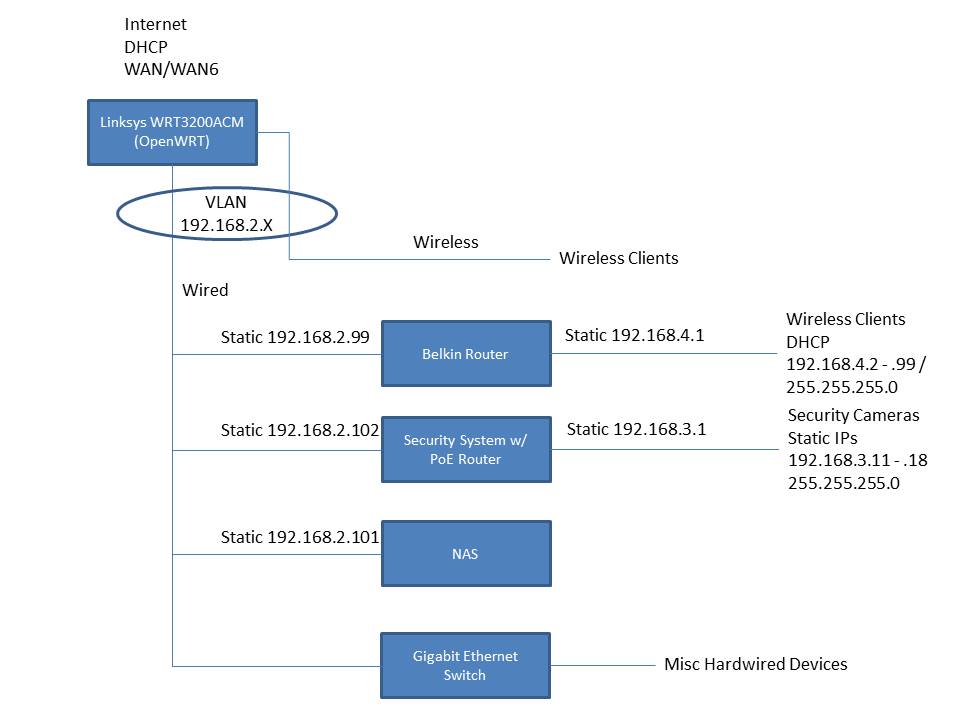 The easiest approach is to simply turn off the dhcp server on the secondary routers, assigning then a static ip in the 192.168.2.0/24 network (avoiding the dhcp range), and then connecting them via lan-to -lan (i.e. not using the wan port on those routers). This will create one flat network. Don’t forget to reassign the cameras and anything else using static ips to the same .2.0/24 range. You could also use the dhcp reservations to make the cameras and other static ip devices easier to administer since they would get their up via dhcp.

If you do want to setup VLANs, it’s not hard to do. But you should have a very clear goal in mind in terms of what devices are on each network and what kind of access they need to the internet and other networks.

The system itself (.3.1) needs to talk to the Internet and to other devices on the Linksys network or Belkin network.

I don’t quite understand this, specifically the Linksys OR Belkin networks - which? Both? Optionally one or the other?

I was so hung up on getting the Belkin router to work when connected through its WAN port that the simple solution you proposed escaped me. Thank you so much for that. Using the LAN port to make the Belkin just extend a flat network works just as I wanted... not sure why what I was doing wasn't working, but now that it's doing what I want, I'm not sure that it matters to me.

The security system is still a little bit of a wrinkle, but I found some things to poke at on the security system (which isn't OpenWRT) and will start a new thread if I get stuck with something related to the OpenWRT setup. Thanks again.