I'm trying to setup the R6220 as a wireless AP. I've done this once before with another router so I know the basic setup. The problem is, once it's connected to the main router (wireless) it's displaying the host as "?" so whenever I connect to the AP with wireless, I get instant disconnections. Connecting to the AP wired works fine. It's a problem with wireless.

Host as "?" is usually because it does not retrieve hostname info from dhpc leases table or the device does not send the hostname in dhcp query... you had dhcp on another device right ? or another dhcp capable device near?...

may be you have two dhcp on same network and that is the reason of the disconnections because one of them points to a gateway without internet and device it disconnects itself because of no-internet.

about duplicate entries in associated stations... what release are you using? the lines are perfectly equal or differs on macaddress or signal or some other column?

I see. I'm seeing "disconnected due to excessive missing ACKs" when the disconnections happen.
The R6220 will be the AP for another Linksys router, both currently have DHCP enabled, If I disable it on the R6220 I can no longer connect wireless to it.

I dont understand, in first message you said that R6620 is AP, and when is connected to the main router wirelessly... ?... then you said R6620 will be AP for a Linksys router...

please try to draw your setup in order to understand it properly.

Sorry for the confusion.

Linksys is the main router. Router A. The R6220 will be a wireless AP, router B (wireless to and from it) no cables connecting them.

Above setup works. But I can only repeat with 2.4GHz in this case, because of the 5GHz intermittent master.
And I'm getting 1/4 of my connection speed over 2.4GHz (45Mbps) 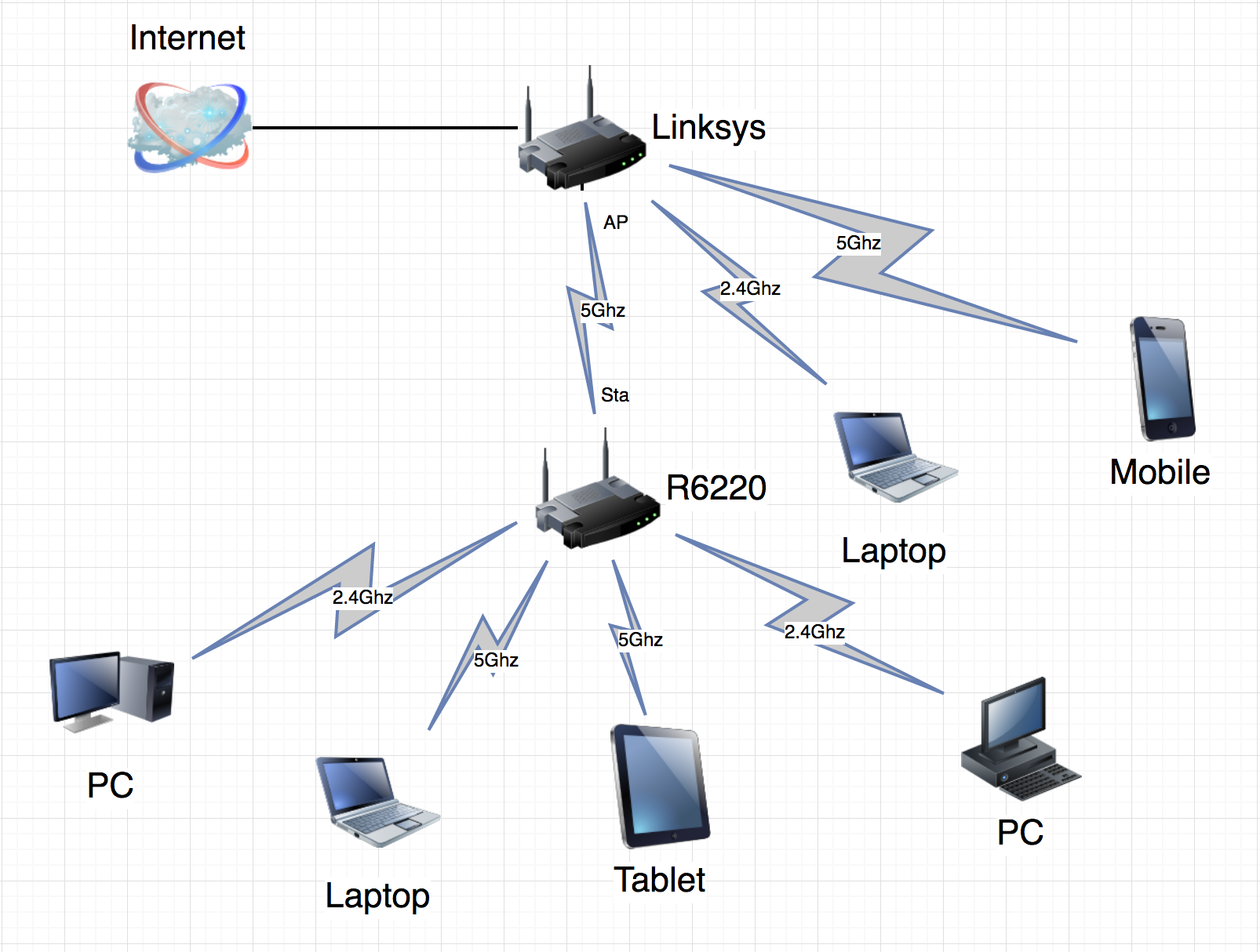 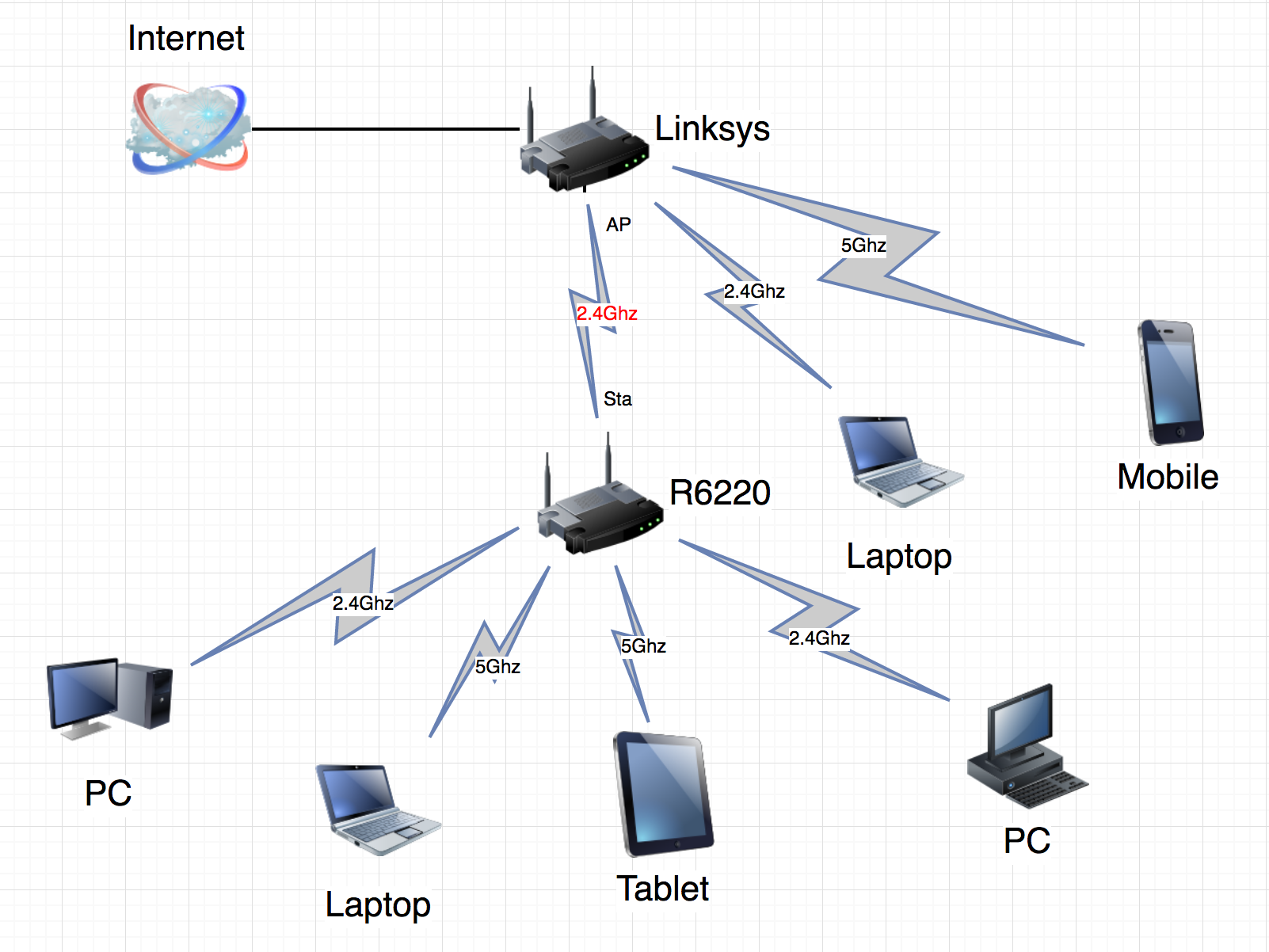 Try using channel 6 on 2.4Ghz (sometimes with channel 1 or 11 and you should use wireless.radio0.noscan=1 in order to allow 40mhz ht mode, with radar scan it should use 1 and above or 11 and bottom, but with interference it will not use neither. if you set noscan to 1 probably will be forced to HT40 and will get an increased link speed. (check the same on LInksys end)

Probably all of this is Linksys fault... check if the their chipset is broadcom, and make a test with another 5Ghz AP.

The Linksys is working perfectly fine. I have no issues with that.

The above is intermittent

Both above are slow.

I've been able to cause intermittent wireless with just using the R6220 and adding multiple access points to it and connecting the phone to one of them. Without the Linksys being in the equation. I thought it may be a DHCP conflict but I don't know now.

The Linksys is Marvell.

If the Linksys is older than Netgear may be the talk between them are different this is true for some specifications like wds on different chipset brands usually atheros behaves well and make friend with anyone but just doesn't understand things from others. Marvell with Apple radios are problematic too.

None of my WiFi devices are able to see channels so high.36-48 seem to be it. The R6220 connects to the Linksys with channel 104, but the master channel (AP) is forced to that, so can't connect.

I followed this guide here https://forum.openwrt.org/viewtopic.php?pid=173467#p173467 to setup the AP properly. Works fine with wired, but 5GHz master still drops if the 5GHz radio is client and master.

I've found a weird way of making 5GHz master wireless stable. For some reason WPA2 isn't working anymore, so I had to do a MAC filter for now.

I had to add 2 dumb SSID's like in the image. Then it works. If I disable dumb or dumber, EXT becomes unstable again.

I really do hope a developer sees this and can explain what is going on here! So strange.

edit: turns out it just prolongs the connection. It still happens, eventually.

You're using a MediaTek product. I don't know which driver it's using specifically but it might just suck with VAPs.

Could be. I will do that for now. The latest snapshot uses 4.9 kernel but the same problem.