My Linksys E8450 is bricked. I'm not sure what I need to do and any help will be greatly appreciated. I was loading OpenWRT and flashed the wrong package. Now there are no lights on or flashing and no ethernet connection. I connected a serial cable with screen and tried to load files, but I'm not not sure what it needs now. 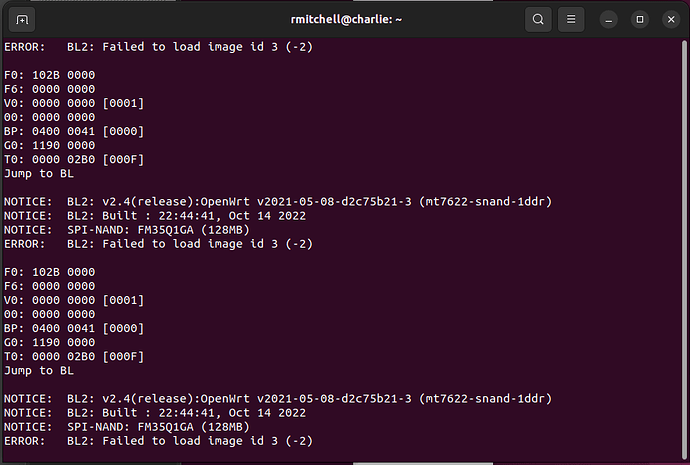 Just a precaution: I don't own this device.

That early boot log with "BL2: Failed to load image id 3" sounds like major trouble. It is much too early in the boot process that anything from the full OpenWrt recovery etc. would be in play.

But as you have serial access, the situation is likely not hopeless.

The closest similar thing that I found, is the discussion from a few months ago, starting here:
(that discussion is about bad blocks affecting fip, but closely related to broken bl2 and/or fip images)

Compared to that discussion, your log ends before the "BL31 starts" line, which might mean that your boot process fails already before the full u-boot have even started...
(...so you might just have parts of the ARM trusted firmware loader to play with)

That early boot log with "BL2: Failed to load image id 3" sounds like major trouble. It is much too early in the boot process that anything from the full OpenWrt recovery etc. would be in play.

Yes, this looks like the fip image containing U-Boot and TF-A BL31 has been overwritten. That really shouldn't happen by chance as the fip MTD partition is read-only under Linux.
Hence it is crucial for us to know what you did exactly before that happened -- most likely you are dealing with a semi-broken flash chip, unless you deliberately removed the read-only attribute from the fip partition and wrote something there.

To rescue the device at this point you will need to setup JTAG with OpenOCD and load U-Boot to RAM using that. Then you need to re-write the bootchain, the easiest way is to re-run the installer loaded via TFTP.

I tried to flash the preloader and I think it was this one at https://downloads.openwrt.org/releases/openwrt-22.03.2-mediatek-mt7622-linksys_e8450-ubi-preloader.bin
I might have chosen the wrong file. Actually I think I shouldn't have flashed any file. I have several older routers and I plan to play with the older ones next time.

I bought another E8450 and I'm including a screen snaphost of the OpenWRT status page.

I've ordered a JTAG from DIYGadget.

I did not remove the read-only attribute.

Thank you all for the help.
Robert Mitchell

I tried to flash the preloader and I think it was this one at https://downloads.openwrt.org/releases/openwrt-22.03.2-mediatek-mt7622-linksys_e8450-ubi-preloader.bin

So as you didn't remove the read-only attribute I understand you were flashing this file via TFTP using the U-Boot menu. Correct? If so, you should have also flashed the BL31+U-Boot (FIP) image at this point. Anyway. Both is very dangerous (hence the red background) and should never be needed once the device is running U-Boot 202x.xx.

I've ordered a JTAG from DIYGadget.

This is a flash adapter, not JTAG. It will not help you in this situation, or at least it is very difficult as you would have to write the flash out-of-band area in such a way that it looks correct to MediaTek's hardware ECC/BCH engine. Better to write using JTAG, as then you are using that very same ECC/BCH engine for writing, so it will all be fine.

This part can help here:
https://www.diygadget.com/tiao-usb-multi-protocol-adapter-lite-jtag-spi-i2c-serial?search=JTAG&category_id=0

I also tried to flash uboot with tftp.

What was the motivation or reason for updating bl2 and U-Boot? I'm thinking that maybe it's needed to make a bigger warning message and also clarify that there is no advantage what-so-ever of updating the bootchain once it is working...

Now, to rescue the device with JTAG:

[jtag-all] [jtag-close] It's 1.27mm pitch pins, so quite a challenge. If you want to avoid soldering, get one of those PCB probe clamps with pogo pins:

Maybe forum user @vasilii can give you a hand if needed, they went through the procedure most recently...

I got jtag working and found this as well. Is this what I need to load uboot? I'm not sure what to use to move uboot.bin from my pc to the router. I'm still looking.

No the steps above will not work on MT7622 devices, we don't support flash read/write in OpenOCD. You have to load U-Boot to RAM, as described here:

Contribute to mtk-openwrt/openocd-scripts development by creating an account on GitHub.

I get this at set cp and the variable is not set.

Searching I find this:
In AArch64, system configuration is controlled through system registers, and accessed using MSR and MRS instructions.

replacing mrc with mrs I get this output:

Does the mrs do what you expect?

the next step is:
From the output of halt command:
Do I execute "halt"?

You have to build OpenOCD from source and also apply this patch.

I look at the armv8_dpm.c and it contains the 4 lines in the patch.

At this point I'm going to go watch football

What is the best way to debug this?

For reference, this is my openocd.cfg used to re-flash this device:

Is there any reason this could happen with a properly patched and compiled openocd installation?

I'm using adapter driver ftdi for a tumpa-lite with chip FT232FL with tumpa-lite.cfg. Now I'm trying to find commands that do the same functions as

Let me know if I'm heading in the wrong direction, please.

BTW, Thank you for helping.

Make sure the pinout of the adapter is configured correctly to match your actual connection to nTRST and nSRST signals. In tumpa-lite.cfg you see the commands for assigning the pins, so make sure they are either really exactly the same or modify your configuration accordingly.

Well, I have another error: