I managed to install OpenWrt on a WRT1900ACS a while ago and I was using it in bridge mode.
I was having some power issues and the power cycled a number of times, after which I couldn't access the router over ethernet (connection refused) though I can ping it successfully.
I have never used SSH and I am not 100% sure what I am doing, but I was able to SSH in to the router - see screen cap below.
I want to sell this router, so I can either restore the LInksys firmware, or fix the OpenWRT firmware - whatever is easier?
Can someone give me a newbie version of what I need to do using SSH?
I was trying to understand the info here, but I am lost. I have downloaded the Linksys firmware. 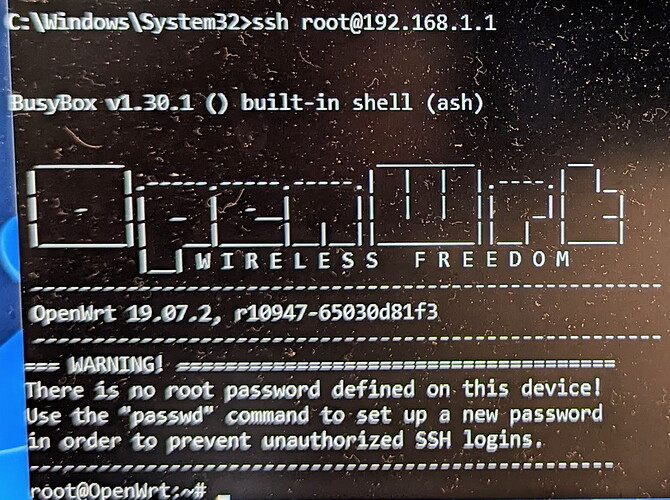 it's hard to know what is "wrong" with the current situation, but a it looks like you've managed to connect to the device using ssh (despite you saying that you couldn't access it)

Thanks - yes, I did say that "I was able to SSH in to the router"
I will try that - appreciate the help!

Thanks - yes, I did say that "I was able to SSH in to the router"

right... you did, but you also said this:

after which I couldn't access the router over ethernet (connection refused) though I can ping it successfully.

was this for the web interface? ssh? both?

ok.. once you do the reset (firstboot), the router will be in the default state. Wifi will be disabled, but ethernet will work. From there, upgrade to the latest version of OpenWrt (and do not keep settings when you do the upgrade). Once that is complete, you can set your wifi SSID and password and then enable wifi. Depending on your network details, that may be all you need to do and you'll be back up and running.

Awesome - all good and upgraded to the latest version of OpenWrt.
Thanks everyone for your help!