Name under which OpenWrt router appears in device lists

Can the name under which an OpenWrt router appears in the device list of another router be changed in the web interface?

Detail on: My OpenWrt router shows up as "Unknown" in the list of connected devices of a higher-up router (a cable modem connected to the Internet; the OpenWrt router acts as firewall behind it, to which all of my networked computers devices are connected). I'm using a TP-Link TL-WR841N with openwrt-15.05.1-ar71xx-generic-tl-wr841n-v10-squashfs-factory with LuCI interface-

where this "list" is aka what underlying resolution protocol

the OpenWrt router acts as

whether it's doing nat, dns, etc. ( aka hosting the resolution protocol above)

Where is the list?
Is you Openwrt router the one that provides the list ( usually the clients "main" router )

The list is displayed by the higher-up router, which assigns an IP to the OpenWrt router via DHCP. I have no idea how it fetches the names of connected devices. However it does it, it gets the name of another device (a Sky streaming box) correctly. 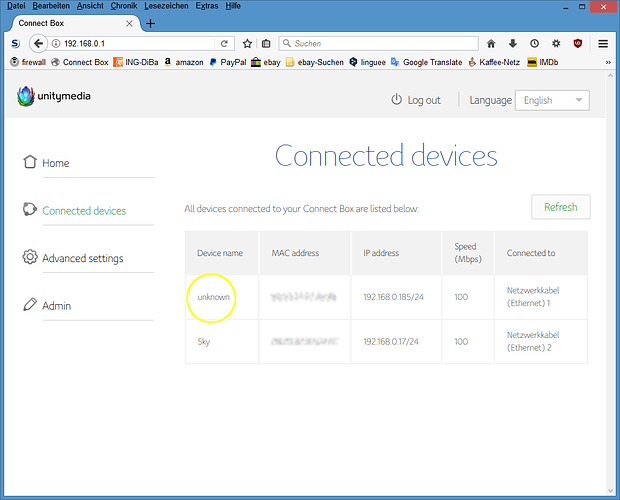 https://openwrt.org/docs/guide-user/network/ipv4/start#protocol_dhcp
hostname
Hostname to include in DHCP requests

thanks to the info, so we can paraphrase.... for thread searchers....

"my upstream router hosts list ( which appears to be dns / hosts file based ) displays my openwrt-router-hostname as UNKNOWN.

The openwrt router's connection to the upstream router is on it's ( WAN? ) XYZ port"

( relevant for other resolution methods )

FYI, this thread is almost the same situation so you'll likely get all you need there:

is it statically or dynamically assigned ip? when you say "shows up" what are you referring to?

P.S. Welcome to the community!

Thanks, that helped. What did the trick was to manually enter the desired name under Network->Interfaces->WAN->"Hostname to send when requesting DHCP'". In the web interface, that field was already filled out (with the name previously entered under System->Hostname) but that was not picked up by the upstream router. After entering the desired name manually, it worked (after stopping and re-connecting).