Hi, a few days ago I read about OpenWrt and immediately flashed it to a FritzBox 7363SL I was using as an AP. I have a second FritzBox (without VLAN functionality) as the Router, that I don't want to flash as it is provided by the ISP. In between these two there is a sort of managed switch (TL-SG116E).

What I want to accomplish is fairly simple: Just 2 WLAN's with different VLAN's.
But after almost two days of watching tutorials and experimenting I can't get my head around it.

What I've done so far:

But I still can't access the internet when connecting to a WLAN.

If I understood PVID correctly I don't have to set it in the Switch options as it only applies to untagged packets?

I hope you guys can help me.
Tanks! 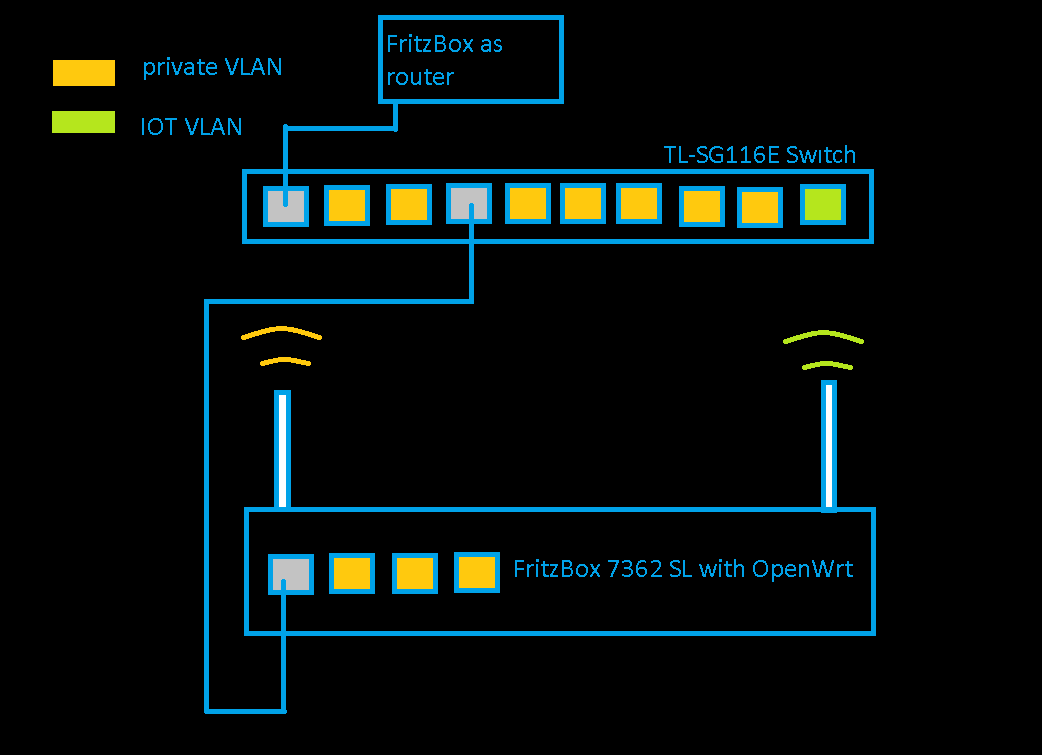 So you would first start fixing your ap and then later on maybe add an iot vlan port to your managed switch.

In order to set up the ap follow this guide:

Guest Wi-Fi on a dumb wireless AP using LuCI Guest Wi-Fi provides internet access to your network members. It also provides firewall security rules to isolate your guest network from the rest. This recipe is based on the Guest Wi-Fi basics and Guest...

and use the guest wifi as iot wifi ( and name the network and firewall zone accordingly).

Once you have the iot wifi running, you can set up the openwrt iot switch part of the fritz box and change the first port to tagged. And then finally you can set up your managed switch.

But do it really step by step to make sure each component is configure correctly before configuring the next one, otherwise debugging is horrible. So initially I would reset the managed switch and remove all vlans there, until your ap is set up correctly.

To do what you're saying you'd have both networks exist in the main router, yet you're also saying that your main router only has one LAN network and no ability to add more networks, let alone VLANs.

So like @Stefan1 said, locally route the IOTs on the OpenWrt router and NAT them out to the Internet through your existing LAN. Which will remain only one network (all untagged) since that is all that the main router can do. There is no usefulness of VLANs in the switch if they can't be sent onward to the main router.

The locally routed IOT setup also includes a firewall to block the IOTs from reaching any IPs of devices on your LAN. They only have the Internet.

Thank you both for the help. I'll try it out tomorrow.

do it really step by step

Yep already noticed that.
Looks like another nice community to me

Sorry, I totally forgot to reply. I now decided to buy a fast enough router and use this as the main one behind the ISP's FritzBox. But thank you for your help again.