I've had a very mixed experience over the years with OpenWRT reliability on routers. Back in the dark ages, WRT54Gx routers worked great, stability was bulletproof. Times moved on, and I moved to Netgear R8000, and stability became pretty poor.

So - while my experience with OpenWRT has always been that it "just works", what I am particularly interested in here is a shortlist of routers on which it will "just work" for months or years without needing somebody to reboot it. R8000 I have at the moment is a fantastic router in terms of features and performance, but having to reboot it once every few hours to few days is too annoying and disruptive, especially since I am often away and need to reliably connect to stuff on my home network remotely.

So - what is the gold standard router when it comes to OpenWRT support and reliability? Is it one of the new Linksys WRT ones? What should I get if I want something that works without needing to be babysat more of then than maybe once every year for a firmware update?

If you only need "some kind of wifi", get x86 with wifi build in.

I don't want to work that hard on something that should for all intents and purposes be an appliance for a problem that has been solved for decades. I want a box I can just buy, plug in, flash to OpenWRT and use.
Low effort, low maintenance solutions only for this requirements, please.

I want a box I can just buy, plug in, flash to OpenWRT and use.
Low effort, low maintenance solutions only for this requirements, please.

that's what those are, if you just get the right device.

And my question is what is the "right device"?

your requirements are vague, but

Turris routers might work too, but I have no personal experience with those.

Same goes for PC Engines, if you can get a version with a wifi card pre-installed.

I have good experience with the R7800 for about a week now. Feels solid for now. What exactly is not feeling stable for you?

And what build are you using?

A week isn't really long enough to get a proper stability feel for the device, IMO. Once in a while my R8000 doesn't skip a beat for a week.

What doesn't feel stable is that radios all lose connectivity. I can see all 3 of them, and I cannot connect to any of them with any of my devices, until I power cycle the router. This is with no extra features or add-ons, just a bare OpenWRT image with nothing else added.

I have exprienced this problem with every OpenWRT stable build released for the R8000 over the last 3 years.

Cost is not a concern.

Then get the new Turris Omnia ( basically the old one but with the newest wifi6).
Running rock stable for more than 6 years for me now.
Note that is not running official openwrt but a fork (Turris OS) that stays close by ( although official support is available - not sure about stability though)

It was under development for many time, so I had to use snapshots.
But now it is in the mainstream and supported by 22.3.2.
It runs openwrt without forks or modifications.

It is a router quite cheap for its capabilities and is a modern one.

Runs for months with no glitches or having to reboot and when I have it is due to doing tests or installing upgrades.

Perhaps somewhat ironically, the most reliable and best supported OpenWRT routers are the platforms where WiFi support is an afterthought - x86 and in more recent times, perhaps the Raspberry Pi 4. Most people using these platforms are going to be running separate/dedicated WAPs from the likes of Ubiquiti, TP-Link Omada, etc.

Sadly, where I just moved to 300Mbit isn't going to happen any time soon, so stability is much more important to me than performance.

Turris routers might work too, but I have no personal experience with those.

I am using a turris omnia as well, and am quite happy with it. Sure turris OS lags a bit behind (stable turris OS recently switched to an OpenWrt 21 base) but for me the automatic update feature from a source I personally trust is more valuable than getting the most recent OpenWrt sooner.
There have been some glitches in the past (to be expected realistically) but team rurris always did a good job at fixing these once they were known.

The dual arm a9 SoC used is a pretty decent performer, which will allow things like sqm probably up to around 500/500 Mbps (depending on circumstances).

I can definitely recommend Luxul which is commercial/high end residential grade. It runs their own customized OpenWrt but you can easily flash.

The hardware is rock solid with oversized caps and a beefy power supply you don't get with the retail routers.

Anything OpenWrt support related that made you recommend "Luxul" devices? Othan than a beefy power supply and oversized caps. As the kernel is not that interested in those details.

What does stability mean to you? I've had an EA7300 with OpenWRT powered on for hundreds of days in a row with daily streaming on it and using it as a client on 2.4 and AP on 5GHZ. I have an EA 6900 in the exact setup with DDWRT on and modified CFE running for more than a year. I keep making fun of my son who works for a large enterprise that my consumer routers have longer uptimes than his enterprise grade Cisco trash. What do you mean by stability, do they crash often?

Yes. my R8000s crash regularly. They require power cycling at intervals between hours and days. And when they crash, they crash hard, not just radios, but wired connectivity, too.
And it's not just one router going duff, I have 4 of them and they all exhibit the same stability problems.
Love the R8000 functionality and performance, but stability is pretty terrible.
My ancient modified (for more RAM) WRT54GS routers often clocked uptimes in years.

Long-term stability is about attention to detail. For instance, I worked for an "enterprise" software firm, found lots of customers had crashes after 6-9 months. In all cases root partition had filled; looked into it, turns out HTTP log wasn't getting rotated. Took huge personal effort and 2-3 release cycles (6-9 months) to get it enabled by default. If nobody looks into the less common crashes and drives the fix they don't get fixed.

Hmmm, interesting. Try an R7000 I have one of those also and it's rock solid with DWRT on it. Here's a screenshot with the uptime. Maybe you have a weird config, VLANs, VPNs, try a different version of OpenWRT or get another device or set the syslog to a separate server maybe you can see better before it crashes. 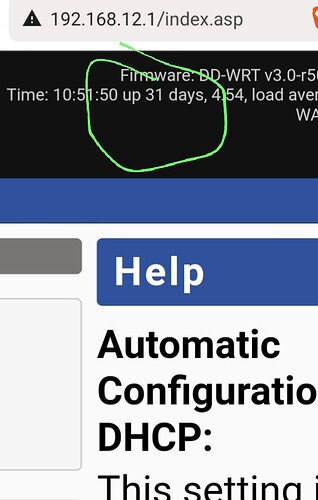