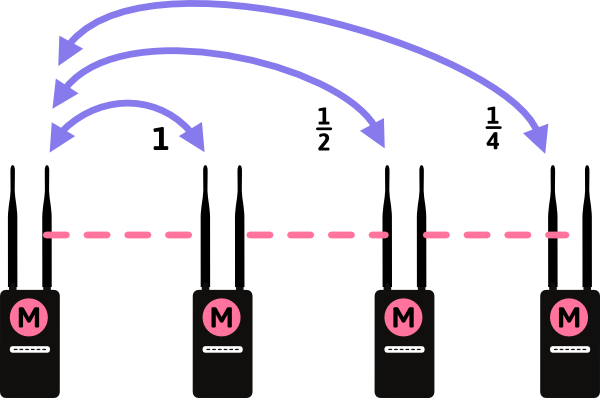 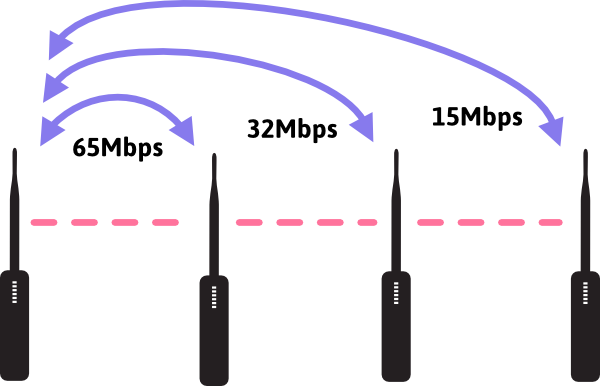 will this happen even if i use a dual band ap and use 1 band exclusively for backhaul while the other band is used to as an access point?

so even if i use 40mhz or 80mhz on the 5ghz backhaul i will still have reduction on bandwidth each hop?

so if my adsl internet maxes out at 50mbps the same principle applies? each hop reduces my speedtest on my internet connection?

That is when routers are far apart?

Not sure but i really dont know how many hops the mesh makes.

This is a purely theoretical queastion.

I have only talked to some people about that behavior so information is just second hand but to give it a try. And only from looking at he pictures on your link I think it is already described in much detail what does happen.

for many hops:
You have multiple effects influencing what you describe. The most basic behavior is about splitting the bandwidth repeaters in half for each hop because if it has a possible throughput of 300Mbit/s then it would use about 150Mbit/s for receiving data and about about 150Mbit/s for transmitting it again. This approach might give you the furthest reach (and is supposed to be a bad idea because it adds latency on top and gets ugly quickly - not my experience).
And of course multiple antennas help to distribute the load between them thus increasing throughput and reducing ping. But in the end it might be more important how thick the walls are you trying to pass through. (That's some wifi technology but I can't remember its name)

That means if your 5Ghz device is an intermediate hop then again it will half your bandwidth because of receiving and transmitting at the same time. But it is not as bad if you use 5Ghz to connect to the next hop and only connect clients to a 2.4Ghz. Yet again I have no experience with that myself. Wired connection (maybe even powerline) would be a preferred way if possible.
Rule of thump (as your link states): Every router should do just one thing (that might boil down to every pyhsical interface should to one thing)

On the other hand if you put lots of devices close to each other you might not cover distance but clever mesh protocols could at least optimize what there is to be optimized. Maybe have a look at bonding mode and Multi-link Optimizations to get some intuition.

Wifi mesh network on the cheap Network and Wireless Configuration

It doesn't matter what technology you use, if you're sharing the radio, the bandwidth will be cut in at least half -- x ms to receive a packet, another x ms to transmit it to the other end. If you put clients on one band and the backhaul on the other, then you don't lose the bandwidth (just increase the latency).


@jeff
is this true?
a mesh network with a dedicated band for back-haul will not have reduced throughout the more hops you add? only the latency is increased?

It will have reduced throughput (it's difficult to quantify this, as topology and channel utilization and overspill matter a lot) as well, but significantly less than the halving at each hop, which would happen by sharing one interface for front- and backhaul.

completely agree with what @slh said.

imagine you got a line of devices and each one only can talk to the next one. If all of them having 5Ghz and 2.4Ghz antenna then you could in theory configure the first to use 5Ghz to sent data and the second one the 5Ghz to receive data but use 2.4Ghz to send data again. The third one would then receive via 2.4Ghz and sent it with 5Ghz. And so on
That would of course add the overhead of decoding, maybe decrypting and again encrypting and encoding the data which is certainly not desirable but it would not cut your throughput in half the way described before.

But to be clear. That is not really a scalable concept. Again I am not telling from experience but simple reasoning.

@slh was implying to use the 5ghz band for backhaul and use the 2.4ghz band on AP serving clients.

5ghz band for backhaul and use the 2.4ghz band on AP serving clients

That is one option, a better one is the use of tri-band devices, with three independent radios (usually one 2.4 GHz radio and two 5 GHz WLAN cards, one usually serving the lower part (ch36-ch64), the other the upper part (ch100-ch165)).

Hardware is xiaomi r4a 100m
Dedicated 5ghz for backhaul.
40mhz wide channel.
Connections on mesh are pretty good below 70dbm
Rx Tx are both above 100mbps on all links.

My ISP speed is around 60-70Mbps
Testing is done using OOKLA speedtest.net

Direct on gateway and 1-hop gets full speeds of the 2.4ghz band. Around 50mbps. GREAT!

2-hops the speed goes down to around 25mbps. STILL OK.

3-hops the speed is now around 12-13mbps. KINDA DISSAPOINTED.

With this kind of speed the 4th HOP would theoretically be around 6Mbps. Which would be good only for a direct single client. Not enough for an AP.