Hi everyone
I am trying flash my meraki18 using raspberry pi and openocd.
I have used tutorial from this link:
https://openwrt.org/toh/meraki/mr18/jtag
Currently I managed to connect to meraki console and can see boot logs.
Unfortunately I have stuck on Openocd JTAG connection.
I have changed raspberrypi-native.cfg and created new mr18.cfg and
when I use this command:
$ sudo openocd -f raspberrypi-native.cfg -f mr18.cfg -c "init; halt"
I am getting error message

Have you got any ideas what may go wrong??
Thank you for your support

You need to issue the openocd command immediately as you power on the MR18.

Then also the telnet commands

Yes I know and I am doing it straight after power on MR18.
Also I have tried to do this at many different points of booting process with no joy.
Any other suggestions??

It's a long time ago i used openocd but it seems to me like a cabling issue or you forgot to configure the rpio pins alt mode. Those kind of things will result in the error you mentioned. I'll take a look at the openwrt manual later too see if it's missing something (or is outdated).

What firmware is currently on the MR18?

Do I have to change all used GPIO to alt4 mode my self?
I am not sure which exactly version I got as odm command does not work on serial connection and I am getting message UNRECOGNIZED COMMAND LOGGED TO CLOUD SERVERS,
so it looks like it is one of the latest versions.

Ok, that looks like a Meraki firmware
No as per the guide no need to change gpio mapping.

I have got rasp pi 3 b+
this is my wiring 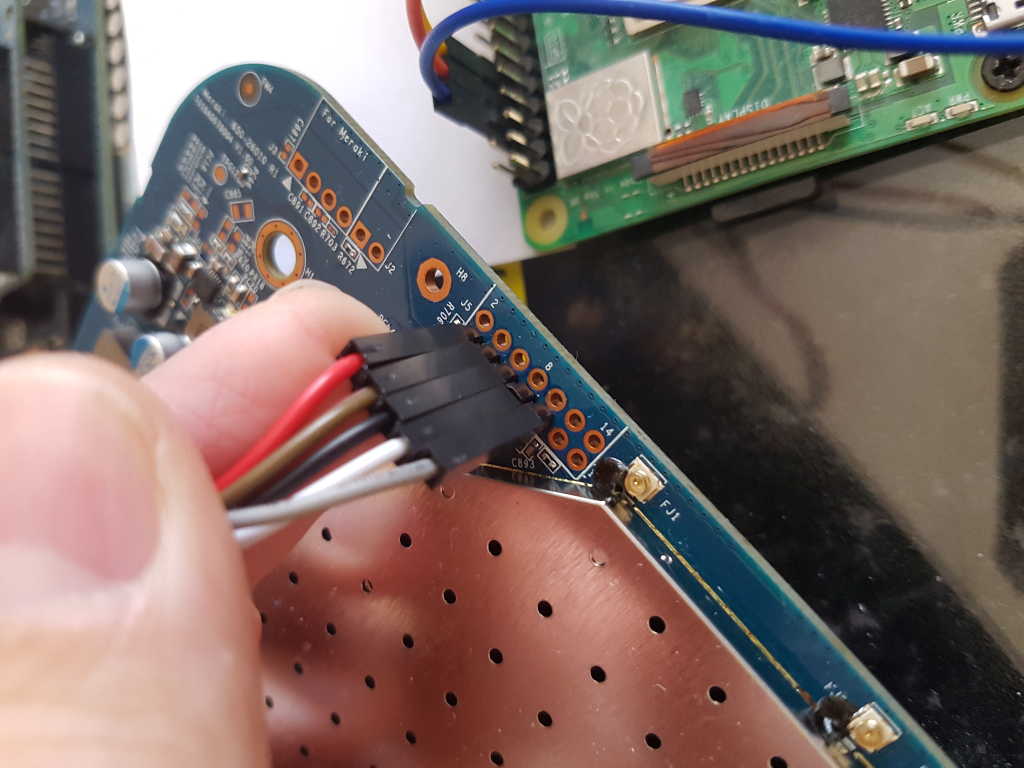 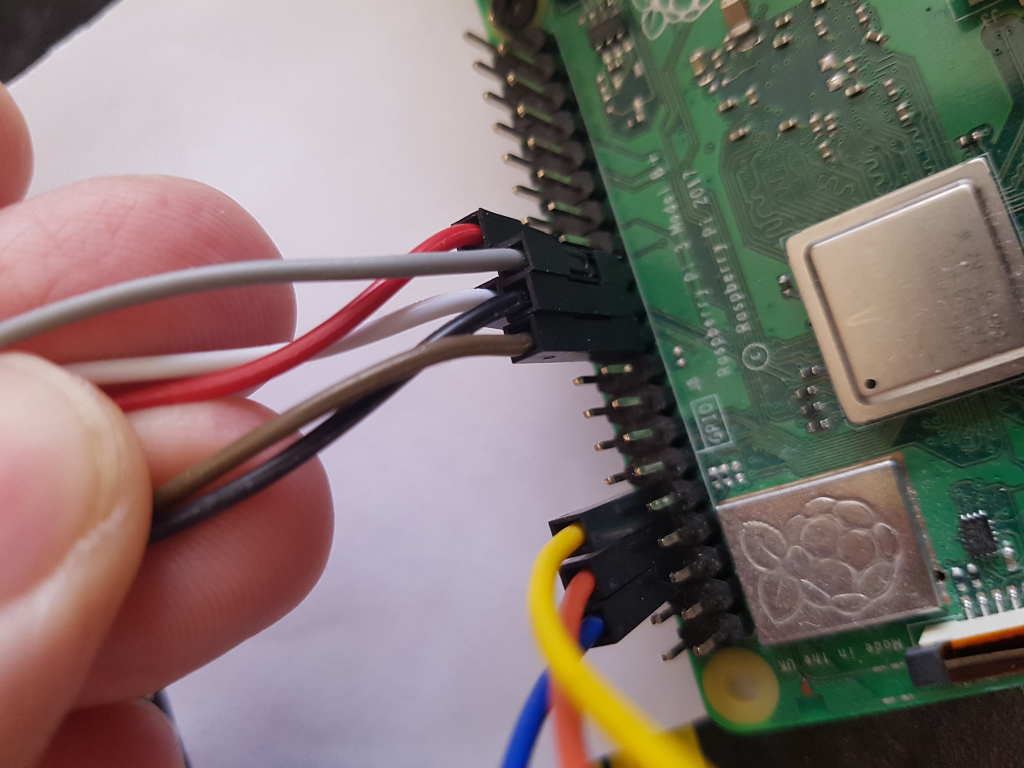 I used a fresh copy Rasbian only enabled SSH not spi 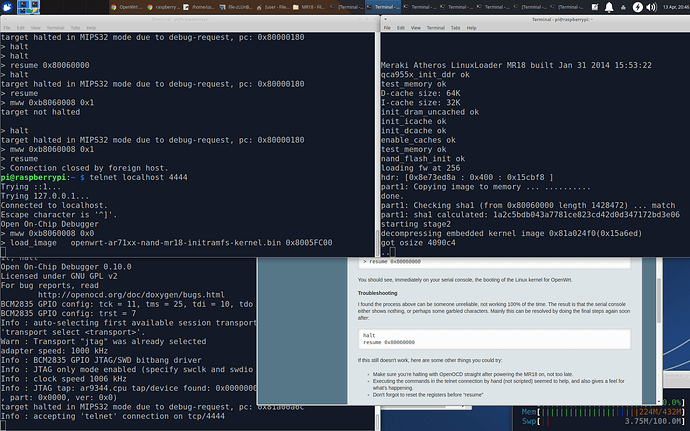 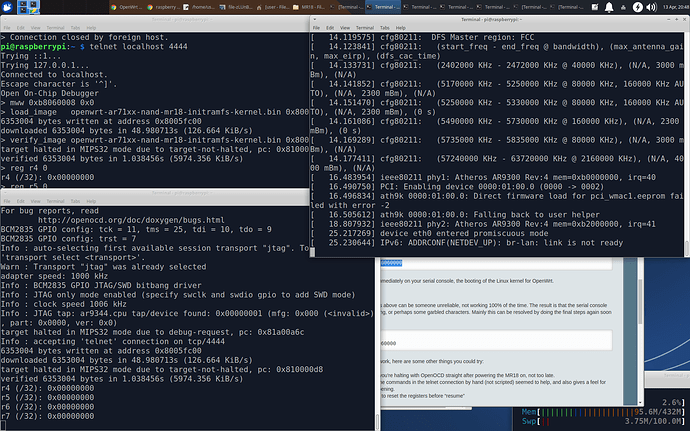 have you done anythig extra which isn't in this manual??
Can I see your wiring a bit closer??
which rasp you got??
My still does not work and not sure what causing problems.

Sorry for my late reply. I hadn't got time to look to the docs. Your problem here is that the Pi model 1 differs from model 2 and 3. And to even more complicated, the model 3B uses a different SOC so even there there could be a difference.

I see you're using the raspberrypi-native.cfg interface script while you're using a RPI3 B+ as the timings are different between the between models. I made a list for you based on the different RPI models.

Also please note that the mentioned pinout from RPI to JTAG header differs between models. Edit is incoming. Edit: Nope I stand corrected, sorry for the confusion about alt modes and pinouts. I was mixing JTAG debugging the RPi itself vs debugging another device using the RPi with JTAG. But for clarity, in your interface configuration you have the following options.

Which corresponds to which GPIO pins are set for jtag debugging another device. bcm2835gpio_jtag_nums defines as sequence of GPIO pins (which are not the same as the RPI header pins).

So the default settings are:

And translating these GPIO pins to header pins means (see also the schematics):

Which should be the same as the table in the guide if I did the translation correctly.

Last edit, I also see a interface/raspberrypi2-native.cfg exists which should theoretically work with your RPI3B+, but also has a few lines commented that we need (and I don't know how it handles the default values). So for completeness sake, just make sure the your interface script contains the following values.

This should theoretically work.

I used all same instructions from wiki https://openwrt.org/toh/meraki/mr18/jtag

And don't forget the peripheral base address. I added the speed coefficients and peripheral addresses for the different RPi models to the wiki.

Thank you for your help.
Curently I have manage to interrupt boot sequence and establish telnet connection
but can not load image and getting this message:

Any ideas??
Thank you

Seems fine to me. OpenOCD is still processing it, it's only using the non-bulk write method. Just continue.

Thank You guys for your help.
Just flashed my first meraki.